Pregnancy Week Calculator: How to Estimate the Delivery Date? 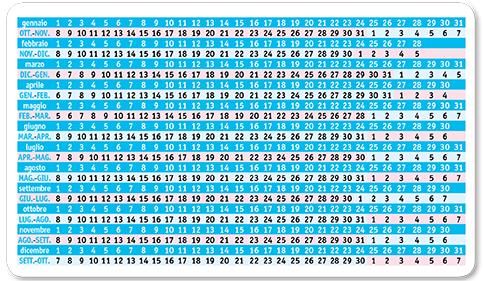 Il calculation of the weeks of pregnancy is an important estimate to take into consideration to know the date more likely of childbirth and for to monitor the development of the fetus inside the uterus.

La duration of gestation is approximately of 280 days, ie 40 weeks taking as reference the beginning of the last menstruation. However, the date of birth is unlikely to coincide precisely with the expected one. In principle, it can be said that, if the menstrual cycles are 28-30 days and the pregnancy proceeds normally, the birth of the child can occur at any time, between two weeks before e two weeks after the expected date.

For a better approximation, however, it is possible to consider some individual factors (such as the date of the alleged ovulation or unprotected sexual intercourse), which will then be supported by the gynecological evaluation, from laboratory analysis and by ultrasound investigations.

Pregnancy Weeks Calculator: what does it consist of?

To date the pregnancy, doctors usually refer to the start day of the last menstruation. The duration of gestation is approximately 280 days, ie 40 settimane starting from the day taken as a reference.

The estimated date of delivery, therefore, is calculated by adding nine months and a week (280 days, in fact) on the first day of the last menstruation.

Pregnancy: why is it calculated in weeks?

First of all, a common belief must be debunked: pregnancy does not last exactly nine calendar months, but ten lunar months, which coincide with 280 days (40 weeks).

The dating of pregnancy is carried out in weeks to make the indications precise, in consideration of the fact that the weeks are always made of 7 days, while the months have a variable number of days (e.g. October has 31 days; November 30 and so on ).

Il conception it occurs when the spermatozoa, going up the uterus, reach the mature egg cell, released from the ovary during ovulation and available for fertilization.


The fertilized egg is carried by the movement of the hair cells of the tuba towards the uterine cavity, where it nestles in the endometrium approximately 6-7 days after unprotected sexual intercourse (therefore around the 21st day of a regular 28-day menstrual cycle, if fertilization took place on the fourteenth day).

At this point, the production of the chorionic gonadotropin, whose "beta" subunit is important for the functioning of the pregnancy test.

Learn more: When to Take the Pregnancy Test

The period in which it is possible for the egg to be fertilized starts 4-5 days before ovulation and ends 1-2 days after. This is possible in consideration of the fact that the mature egg cell, when expelled from the ovary, can survive for about 24 hours, while the spermatozoa can remain viable in the female genital system for up to 72-96 hours. Therefore, unprotected intercourse even 3 or 4 days before ovulation can lead to fertilization.

The duration of pregnancy is conventionally established in 40 settimane.


As anticipated, this time frame is however approximate, so much so that the parties that took place between the thirty-seventh e la forty-first week of gestation however fall within the normality.

When the duration of pregnancy is less than thirty-seven (complete) weeks it is referred to delivery premature o pre-dates; similarly, births that occur beyond the deadline, i.e. from the forty-second week onwards, are considered post appointments.

Calculating Pregnancy Weeks: How Do You Do It?

By convention, the calculation of the weeks of pregnancy takes as reference the first day of the last menstruation: considering that a "standard" gestation lasts 280 days, it is necessary to add seven days and subtract three months from this date (Naegele's rule).

Clearly, the calculation of the weeks of pregnancy gives an indication of the presumed date of delivery. In general, it can be said that if your menstrual cycles are 28-30 days and the pregnancy proceeds normally, you can expect to give birth at any time, between two weeks before and two weeks after the expected day with the count.

Pregnancy Weeks Calculator: What Should Be Considered?

The duration of pregnancy is calculated in weeks, starting from day ofstart of the last menstruation: for this reason, it is important to know this date with certainty.

To calculate the weeks of pregnancy with a good approximation, you need to know:

The calculation of the weeks of pregnancy starts from date of last menstruation. This reference is the only certain in the woman's possession, if one excludes recourse to the ovulation test or basal temperature monitoring to know more precisely when conception takes place.

To learn more: Ovulation Test - What is it and How does it work?

The two weeks of the menstrual cycle "useful" for fertilization are added to the start date of the last menstruation. The following considerations depend on the specific cases: it is calculated, in fact, that if a pregnancy proceeds normally, without complications, it has an average duration of 280 days (i.e. 266 days from the moment of conception to that of delivery), equal to 40 weeks.

However, a physiological pregnancy can safely end even slightly earlier or later, between 37 and 42 weeks.

Use the Online Calculator to: Dating the Beginning of Pregnancy

Generally speaking, the calculation of the weeks of pregnancy should be considered a'indication. Some conditions, in fact, involve one timing variability such as to make it difficult to estimate the child's presumed date of birth (eg severe cycle irregularities, pathological or iatrogenic amenorrhea, etc.).

It should not be forgotten, then, that the calculation of the weeks of pregnancy also depends on the specific characteristics of each mother: the very young, multiparous or smokers have an increased risk of having smaller-for-gestational-age fetuses. Therefore, the risk of incorrect dating of pregnancy is not excluded.

The likelihood that the gestational age estimate is inaccurate also increases with the use of birth control pill or other hormonal contraceptives in the three months preceding the last menstruation.

In any case, the most accurate week calculation possible is a start point: this information can be established with a better approximation by means of a ultrasound check and other medical tests that are performed during gestation.

Calculating Pregnancy Weeks: When Is It Difficult or Impossible?

Calculating the weeks of pregnancy can be quite difficult, as in the case of:

Being in function of the duration of menstrual cycles, women presenting strong irregularities they may have an idea, but cannot determine with extreme certainty the probable day of conception. At other times, it is not possible to refer to the normal rules for calculating the weeks of pregnancy, as fertilization occurred during a period of physiological, pathological or iatrogenic amenorrhea.

Furthermore, the calculation of the weeks of pregnancy does not take into account the changes to the normal course of gestation, as can happen, for example, in the case of maternal illnesses, particular accidents or problems that can influence full term birth.

Pregnancy Week Calculator: How is it corrected by the doctor?

If it is too early or too late, the calculation of the weeks of pregnancy can be "adjusted" by the gynecologist.

The dating of the gestation is established with better approximation through instrumental investigations, such as thefirst trimester ultrasound. This examination allows, in fact, the observation of the gestational chamber and the size of the embryo, allowing the gynecologist to confirm or correct the initial estimate, dating the onset of pregnancy with a very low margin of error, close to 3 days.

L'dating ultrasound it is the first to be performed; this exam is one of the three free ultrasound checks provided by the national health service in pregnancy. To correctly date the pregnancy the cranio-caudal length (CRL) and the biparietal diameter of the fetus.

Ultrasound dating should ideally take place within the XNUMXth week of pregnancy. The earlier the examination is performed, the higher the accuracy of the gestational week calculation.

Pregnancy Week Calculator: what is it for?

The calculation of the weeks is a useful indication to know in which period of pregnancy the pregnant woman and her baby are. This information falls under the data collected in the anamnesis and therefore contributes to to monitor the growth of the fetus, supporting the various ultrasounds and checkups expected during pregnancy. The risk of not dating the gestational period correctly is that of considering a child who is only younger than expected and vice versa as a child who is delayed in growth.

Why is it important to calculate the times during pregnancy?

Each gestation period corresponds to a specific growth phase of the fetus. Therefore, dating pregnancy correctly is an important reference for:

The calculation of the weeks of pregnancy is also useful to indicate the ideal care plan for the expectant mother: a premature baby may need more care, as a gestation that lasts beyond 42 weeks requires a 'induction of labor.

Continue reading: Beta hCG: What is it? Values ​​and Meaning in Pregnancy
Audio Video Pregnancy Week Calculator: How to Estimate the Delivery Date?
Calculate weeks of pregnancy ❯

add a comment of Pregnancy Week Calculator: How to Estimate the Delivery Date?