Pregnancy: stay away from mammorexia 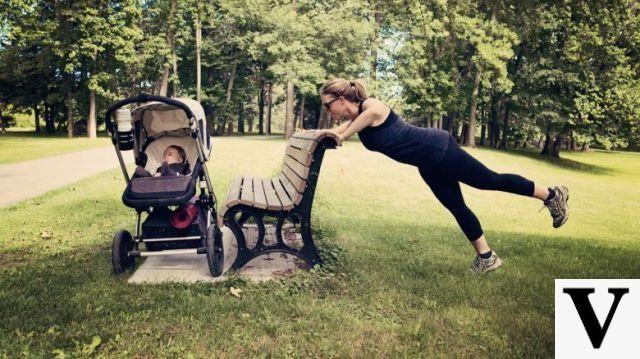 Belen Rodriguez appeared on social media in splendid shape 11 days after giving birth. Only a few weeks of recovery for Ilary Blasi, Kate Middleton, Jessica Alba and many others. Even the Junoesque Kim Kardashian took less than a month to lose 14 of the 31 pounds accumulated during pregnancy and is working to take out the other 17. The stars are school: they carry a pregnancy that is a marvel and shortly after giving birth they show off a belly flat with envy. The envy is that of ordinary women: if they already have some problems with the scale, it takes a moment to get depressed by the post-partum pounds. This is why today we talk a lot about mammoressia, an eating disorder linked to the obsession with getting back in shape immediately and losing weight even with a newborn of a few weeks in her arms.

THE SPECTRUM OF ANOREXIA

They also call it "pregorexia", from the union of the English words mommy, pregnancy and anorexia. «Today we talk about it a lot because the stars impose these dangerous models and the media glorify them. In reality, the phenomenon has always existed and mainly concerns those women who, even before pregnancy, suffered from eating disorders, such as anorexia ", she explains Laura Bellodi, full professor of Psychiatry and director of the Center for Eating Disorders at the Department of Neuropsychiatric Sciences of the San Raffaele Hospital in Milan. The numbers illustrate a real phenomenon: according to the Norwegian Mother and Child Cohort Study, 5% of new mothers suffer from pregorexia; the National Institute of Health claims that 30 percent of pregnant Americans do not gain the minimum weight necessary for the health of the fetus; 7% of British mothers-to-be, according to the UCL Institute of Child Health, admit to suffering from eating disorders.

In the country the phenomenon has not yet been registered. “But the risk is still moderate. Because even if it is easy to be disheartened by the enviable silhouette of a new vip mother on TV, those who are healthy do not give in easily to mammorexia. Maybe she tries to eat little and nothing to get back into the ranks immediately and pursue her model of beauty, but then she can't do it and luckily she resumes a normal diet », says Bellodi. It is also necessary to distinguish between women who have suffered from anorexia in the past and those who have only an obsession with the line but have never really got sick.. "The former, unlike what one might think, live pregnancy well: it is the confirmation that their reproductive system is still fine and they have a sort of alibi to be able to eat freely", explains the doctor. «The others, on the other hand, live the nine months with anguish, obsessed with the line. Especially if they are approaching 40 and hormonal imbalances are stronger ».

IN SHAPE THIS IS BACK

In fact, if many stars immediately flaunt perfect shape after giving birth, there is a reason. And it should serve as an inspiration to expectant mothers rather than an obsession. "Precisely because of the work they do, these women control the line and therefore the nutrition very well," explains the expert. "During pregnancy they are very careful to gain only the weight necessary for the health of the fetus and not to eat more than you really need. This means that they do not accumulate fat but only physiological weight related to the baby, the placenta and fluids. So nothing turns into "fat" and once after the birth it is very easy to get back in shape without carrying out dangerous behaviors towards food in delicate moments such as the puerperium and breastfeeding. Moreover, gynecologists today are very careful to keep an eye on the weight of their patients, precisely to avoid the dangers, on the contrary, of being overweight. It is enough to follow their advice to quickly find one's shape ”.

Audio Video Pregnancy: stay away from mammorexia
Diet, to lose weight do not be in a hurry ❯

add a comment of Pregnancy: stay away from mammorexia