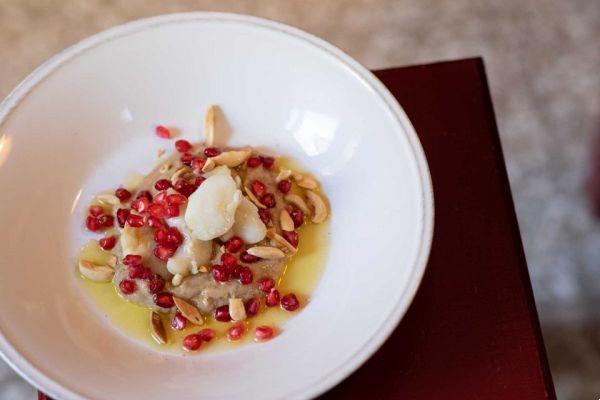 How to eat pomegranate

Great variety is also found in the use of pomegranate in the kitchen, very versatile fruit for various preparations, from first courses, to second courses, side dishes and even desserts.

In fact, pomegranate is eaten both in purity, as it is, well peeled and clean, and squeezed into juice, but it is also used as a special ingredient in grains, especially for holiday recipes..

Its color, the fact that it is a good omen, its beneficial and antioxidant properties make it a much sought-after fruit.

Let's see below a couple of recipes to taste it in the most original ways: apotato and pomegranate salad, which can be paired with octopus if you are not vegetarian, to be served as a warm appetizer; it's a pink mascarpone and pomegranate sauce to give a special and non-alcoholic touch - therefore perfect for children! - to your slices of panettone and pandoro.

Preparation
Boil the potatoes with the peel for about 15/20 minutes; remove them from the heat and put them in a basin of cold water. Cut the celery into small cubes, as well as the apple, and put these ingredients in a bowl together with the cleaned potatoes cut into larger cubes and the red pomegranate seeds.

Prepare the vinaigrette with a pinch of pink salt, pepper, a couple of tablespoons of extra virgin olive oil, half a lemon squeezed and sesame: emulsify well and pour over the potatoes. Leave to rest for at least half an hour before serving mixing the ingredients well together again.

For a variant with a slightly stronger flavor, you can add spring onion cut into very thin slices; for the non vegetarian variant, add some slices of boiled octopus.

Ingredients for about 4 people:

Preparation
Put i yolks in a bowl with sugar and whisk them well with an electric whisk; in another bowl whisk the egg whites until stiff and work in a third mascarpone with pomegranate juice to mix well.


Add the mascarpone slowly to the frothy mixture of egg yolks and sugar, then gently incorporate the egg whites, mixing with a spatula from the bottom up. Leave to rest for at least an hour in the fridge before serving.

Anti waste idea: the pink mascarpone cream obtained in this way can also be used to make small tiramisu in bowls with the leftover panettone or pandoro, decorating with fresh pomegranate grains.

Curiosity: il best time for pomegranate is theautunno, the season in which the fruit is harvested; depending on the climatic zone, the same varies from September to October arriving until late November. The red beans, all well preserved, come traditionally served during the Christmas and New Year holidays, as a sign of good omen.

Read also Pomegranate, the cultivation of the plant >>