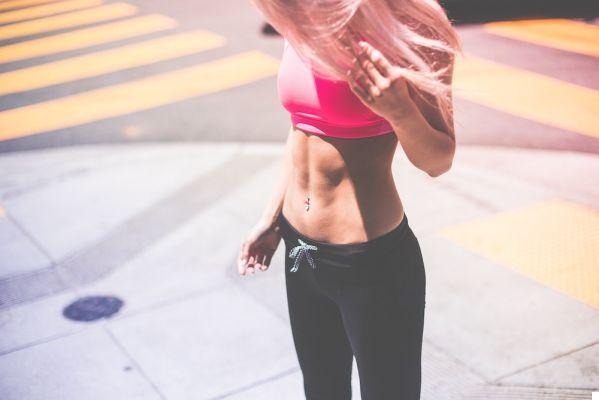 It is known how, in contemporary Western society, the practice of physical exercise can have a positive effect on weight and body composition, on diseases of well-being and therefore on life expectancy, on certain enteric problems (for example constipation), on joint discomfort , on mood and mental balance and even on the success of pregnancy.

On the other hand, on the other hand, excessive physical motor activity seems to be closely related to anything but negligible negative effects, with sometimes serious repercussions on the organism. Perhaps due to a later alignment with the contemporary sporting habits of the general population, the female sex is today at the center of numerous studies that analyze the correlations between physical exercise and general health; in particular, the interest of the scientific community seems to be oriented towards:

This article will analyze the positive and negative and positive effects exercise can induce on female reproductive function.

Overweight and obesity are increasingly common in developed countries, with significant consequences for the health of the general population. The evaluation criterion is the body mass index (BMI), which however should be improved by including the constitution and the morphological type, or a measurement of muscle circumferences and subcutaneous fat folds (plicometry); alternatively, bio-impedancemetry can be used.

In sedentary patients who are frankly overweight, in the outpatient setting, to define the extent of this excess and to consider the distribution of body fat, it is common practice to evaluate the waist circumference (WC, waist circumference) o il waist hips ratio (WHR, waist to hip ratio) - the latter less and less used. This is because the android-type adipose distribution is more correlated to metabolic and vascular risks and therefore to death or permanent disability; in women this occurs mainly after menopause, when the levels of female sex hormones plummet.

The undeniable adverse effects of obesity on health are expressed, in particular, with the increased risk of type 2 diabetes mellitus, hypertension and other metabolic pathologies, therefore atherosclerosis and thrombosis, consequently cardio-cerebro-vascular events, as well as harmful courses on the reproductive system. It has been well demonstrated that weight loss in women is associated with a reduction in the risk of these diseases in obese patients.

In particular, ahigh prevalence di obesity in population infertile, thus demonstrating how body weight plays a fundamental role in the modulation of development and reproductive function. This is because theexcess of fat favors a increase levels of estrogen, following an increase in peripheral conversion - in particular of fat tissue - from androstenedione to estrone, thus favoring a condition of anovularietà, just like in the syndrome of the polycystic ovary (PCOS).

Exercise and increased fertility in the obese

It has recently been shown that obese women subjected to physical exercise for 24 weeks have a reduction in all parameters measuring obesity, and in particular in toilet - the main indicator of insulin resistance - therefore an important reduction of visceral fat; this is evidenced by the fact that women with reduced toilet resume to ovulate. The modification of this parameter therefore improves not only insulin sensitivity, but also plays an important role on muscle, the largest glucose storage site. This effect occurs because physical exercise increases the expression and activity of proteins involved in the translation of the signal triggered by insulin on skeletal muscle. Moderate physical exercise, through the aforementioned mechanisms, favors an improvement in the regularity of menstrual cycles, therefore, with the resumption of ovulation, an increase in spontaneous fertility and that obtained with treatment is observed.

L'beneficial effect physical activity is also manifested by a improvement of outcome di pregnancy. In fact, it has been shown that women who have achieved a reduction in body weight as a result of changes in their lifestyle, have a less chance to develope complications pregnancy related, such as gestational diabetes, preeclampsia, malformations fetal. One was also noted, again in these women reduction of the rate abortività.

Warning! the scientific information below is intended for purposes only informative ed informative.

These mechanisms occur clinically with the clinical picture ofamenorrhea, that is, with the absence of spontaneous menstruation for at least 3 months. When this occurs, we speak classically of "amenorrhea of ​​female athletes". The amenorrhea of ​​athletes can be classified into"amenorree primitive", that is when the woman does not present the appearance of menarche (first menstruation), and secondary ones, in the event that the menstruation disappears after a more or less long period of spontaneous menstrual flows."exercise-induced amenorrhea", together witheating disorder amenorrhea (as from bulimia and anorexia nervosa) is part of the amenorrhea functional hypothalamic. The latter must be differentiated from hypothalamic amenorrhea of ​​organic cause, which include those secondary to tumor, ischemic or inflammatory pathology.

Those at particular risk for excessive exercise amenorrhea are especially those who exercise sports such as swimming, fitness, ballet technique, marathon (...). In these women, the amenorrhea is primarily due to reduction of body weight and the shortage of fat mass; these conditions are also aggravated by the reduction of revenue caloric by the same subjects.

Another important mechanism responsible for athlete's amenorrhea is that of stress neuro-endocrino, resulting in an increase in the inhibitory tone on the hypothalamus by theoxytocin, Serotonin e melatonin, therefore with reduced secretion of GnRH.

The hormonal picture of athletes' amenorrhea, such as those of functional hypothalamic amenorrhea in general, appears to be characterized by a subversion area of normal hypothalamic organization, which induces a deficit di function of the pituitary-ovary axis. Excessive exercise, in fact, is understood by the body as a condition of stress, which influences the secretion of neuro-endocrine modulators with important alterations on the release of numerous factors, inducing a ipogonadism hypogonadotrope.

In particular, one observes reduction levels of gonadotropins, for an increase levels of prolactin, of GH, of ACTH, glucocorticoids and endorphins; moreover, and especially, there is a state of ipoestrogenism deep, For poor ovarian function, with important repercussions on metabolism bony. Free androgen levels are increased as a result of the condition deficit estrogenico e reduction levels of SHBG. The levels of TSH, T3 e T4 are decreased. Furthermore, these subjects exhibit bassi levels di Leptin, hormone produced by adipose tissue, which is decreased due to the reduction of fat mass. Lastly, the persistence of the stressful condition involves theactivation axis hypothalamus-ipofisi-surrene and consequent high levels di cortisol.

In women with no menstrual cycle for at least 3 months, as revealed by the accurate medical history conducted by the specialist, it will be necessary first of all to evaluate the levels of FSH ed estradiol, to differentiate between ipogonadism hypogonadotrope ed hypergonadotropic; in the case of athletes' amenorrhea there will be a state of hypogonadotropism. To rule out a condition of hypothyroidism or hyperprolactinemia, it will be necessary to proceed to the evaluation of thyroid hormones and prolactin.

Diagnostic procedure of the amenorrhea of ​​the athletes

At this point in the process diagnosis it is essential to establish whether it is a dysfunction-related amenorrhea hypothalamic or ipofisarie.

For this purpose, the test at GnRH, with single bolus or microinfusion administration. In the case of a single bolus infusion, the GnRH is infused intravenously at a dose of 100 ug, evaluating the response of the gonadotropins by means of blood samples taken 15 minutes apart, for 2 hours. In normal subjects, LH levels will rise to maximum values ​​approximately 30 minutes after the start of the test; the levels of FSH will also be elevated, although less markedly than those of LH. In the microinfusion GnRH test, on the other hand, GnRH is administered at doses of 0,2-0,4 ug / min for 3 hours intravenously, with evaluation of the gonadotropin response every 15 minutes.

In case you observe assenza response of LH e FSH to the test, the hypogonadism will be attributable to a deficit ipofisario, while, in the case of the amenorrhea of ​​the athletes the response the test will result normal, being hypothalamic pathogenesis. To identify whether hypothalamic amenorrhea is functional, such as that from excessive exercise, it will be necessary to exclude, through instrumental examinations, possible central organic causes.

As a last diagnostic step, the test al naloxone. Naloxone is a selective opioid peptide antagonist, and is administered as a single intravenous bolus dose of 2 mg, with LH levels determined every 15 minutes for 2 hours. In women with hypothalamic amenorrhea the administration of naloxone will lead to an increase in LH levels, but not the characteristic peak that, instead, is found in normal subjects.

Therapeutic process of amenorrhea in athletes

The therapeutic approach makes use first of all of the removal area of cause which induced the alteration; it is therefore necessary to advise women one reduction dell 'physical activity, together with a recovery of weight body accompanied by a balanced diet. This approach allows, in most cases, the resolution of the problem.

Given the key role played by endogenous opioids in hypothalamic amenorrhea, it is advisable administration per os di naloxone, for 3-6 months at a dose of 50 mg / day; usually the results of this approach are good, especially in women who had shown a positive response to the naloxone test during the diagnostic assessment.

For therapeutic purposes, the GnRH pulsatile, administered by means of infusion pumps; in reality this approach is reserved for women wishing to become pregnant in order to cause the LH surge to induce ovulation. The use of oral contraceptives, if on the one hand it has the advantage of favoring the appearance of a menstrual-like bleeding in the patient with amenorrhea from excessive physical exercise, on the other hand it could induce in the patient herself the erroneous belief of a healing, distracting his already scant attention to his state of health.

From what has been discussed in this article it is clear how many and documented the systemic repercussions that can occur in case of excessive physical exercise, and how termination or reducing physical activity, in most cases, allow for restore la normal physiology of the hypothalamus-pituitary-ovary axis.

It is also indisputable that one moderate physical activity benefits relevant to health in general e reduce il risk to develop obesity and related pathologies, such as cardio-vascular and metabolic alterations.

Physical activity moderatemoreover, it is capable not only of regular il period but also of improve la fertility of the woman.

add a comment of Physical Exercise and Women's Fertility