Phrases Against Violence Towards Women: the 30 truest and most profound phrases 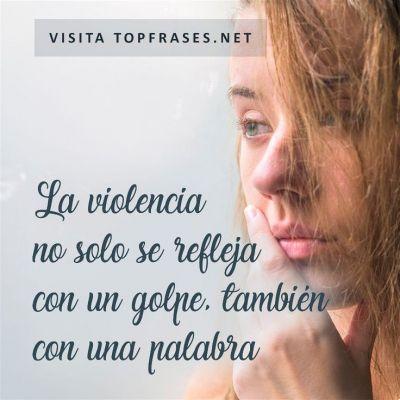 Women's rights are a responsibility of all humanity; fighting against all forms of violence against women is an obligation of humanity. For this we have compiled these 30 phrases and quotes against gender violence. If you want to express your opinion on the topic, you can do so in the comments at the end of the article.

Phrases Against Violence Towards Women

Phrases Against Violence Towards Women: 1 to 20

Violence against women is one of the most shameful violations of human rights. ~ Kofi Annan

If you destroy the wombs, there will be no more children and no future. ~ Denis Mukwege

When women are raped, beaten, mutilated, mutilated, burned, buried, terrorized, the essential energy of life on this planet is destroyed. What was born to be open, trusting, warm, creative and alive, is forced to be folded, sterile and domesticated. ~ Eve Ensler

Violence against a woman is the most cowardly act that a human being can carry out. ~ Dr. Jose Toffoletto

Women's rights are a responsibility of all humanity; fighting against all forms of violence against women is an obligation of humanity; the strengthening of the power of action of women means the progress of all humanity. ~ Kofi Annan

There is no justification when killing a being.

There is a moment when you have to decide: either you are the princess waiting to be saved or you are the warrior who is saved... I think I have already chosen... I was saved. ~ Marilyn Monroe

The main goal of the future is to stop the violence. The world is addicted to it. ~ Bill Cosby

No woman should be a victim of physical abuse. Women need to feel that they are never alone. ~ Salma Hayek

Any woman who thinks that she is the only victim of violence should know that there are many more. ~ Salma Hayek

If you give me any trouble in America, I can trace it back to domestic violence. It is the cradle of most economic, psychological, educational problems. ~ Salma Hayek

There is an unconscious way of seeing violence as a form of expression, as a normality, and it has many effects on young people in the way they absorb education and what they hope to achieve in life. ~ Salma Hayek

One in three women may experience abuse and violence in her lifetime. This is a terrifying violation of human rights, but it remains one of the invisible and underrecognized pandemics of our time. ~ Nicole Kidman

We must promote human solidarity, avoid indifference and involve society in solving the problem of violence. ~ Shakira

If we want to combat discrimination and injustice against women, we must start at home, because if a woman cannot be safe in her own home, she cannot be expected to feel safe anywhere else. ~ Aysha Taryam

Self-respect, by definition, is the confidence and pride in knowing that your behavior is both honorable and dignified. When you harass or defame someone, you're not only disrespecting them, you're also insulting yourself. Street harassment, sexual violence, gender-based violence and racism are acts committed by a person who has virtually no self-respect. Respect yourself by respecting others. ~ miya yamanouchi

Women face an uphill battle, from sexism and violence to inequality. In some areas, they are forced to confront a culture that promotes primitive practices that endanger them not only physically, but also emotionally. ~ Hagir Elsheikh

If a woman is being harassed, is it because she asked for it? Did she dress herself for this? Did she walk her for it? She spoke for that? I would like to challenge this belief. ~ Fatima Mohammed

Toxic masculinity, violence against women and children, racism, are pernicious diseases that are prevalent in our world. Along with pandemics, we must also get rid of these unpleasant negativities. We need to make this world change for the better. ~ Avijeet Das

Every time he raised his hands to her, he brutally killed a prince from a fairy tale somewhere deep in his heart. ~ Akshay Vasu

Phrases Against Violence Towards Women: 21 to 30

Ask a man what scares him more than prison and he will almost inevitably tell you that he is afraid of being raped. What can we deduce from the fact that prison is for men what life is for many women? ~  Soraya Chemaly

Violence against women is a key element in this new global war, not just because of the horror it evokes or the messages it sends, but because of what women represent in their ability to hold their communities together and, just as importantly, to defend non-commercial concepts. security and wealth. ~ Silvia Federico

There are two types of machos: the men who defend the rights of women and the cowards. The choice is yours. ~ Abaida Mahmud

Abusers often make their victims believe that they are responsible in some way. Such misconceptions shift the blame for the abuse from the aggressor to the victim. ~ malika nawal

It's not allowed to breed guys who reject everything feminine, and then get angry when they become men who hate women. ~ Darnell Lamont Walker

It is when we finally realize the futility of violence and the invalidity of war, we, the people of this world, will finally wake up! ~ Avijeet Das

Poor women suffer terrible sexual violence that goes unreported. Due to their social class, these women do not have access to therapy or other healing methods. Their repeated abuse eventually eats away at their self-esteem, leading them to drugs, prostitution, AIDS, and in many cases, death. ~ Eve Ensler

Threatening a current or former partner is not passion, love, or heartbreak. It is violence, it is abuse and it is a crime. ~ miya yamanouchi

As part of the healing process, change your perception of yourself from "victim" to "witness" and "survivor." ~ Don Easton

Violence against women is the last refuge of immoral and disgusting men. ~ Sir Kristian Goldmund Aumann

If women's sexuality in Africa wasn't under attack, if women could say no, if women weren't subject to predatory attacks by men, or predatory behavior in general, then we in Africa would have a disease called AIDS. . But you wouldn't have a pandemic. ~ Stephen Lewis

We hope that through these phrases against violence against women we have expanded awareness of this problem to new people. We must all stand up to all forms of violence. All time.

Phrases of friendship: the best to celebrate your friends ❯

Living in Color: the most beautiful phrases

Phrases Against The Ex: 40 Phrases Full Of Cynicism.

Phrases about Mom: the 100 most beautiful to dedicate

Phrases to Congratulate an Important Success

Phrases to Silence a Person: The 100 Most Cynical

40 Harry Potter Quotes That Will Inspire You In Teal Life

add a comment of Phrases Against Violence Towards Women: the 30 truest and most profound phrases