Phrases about respecting women: 37 quotes to support and celebrate them 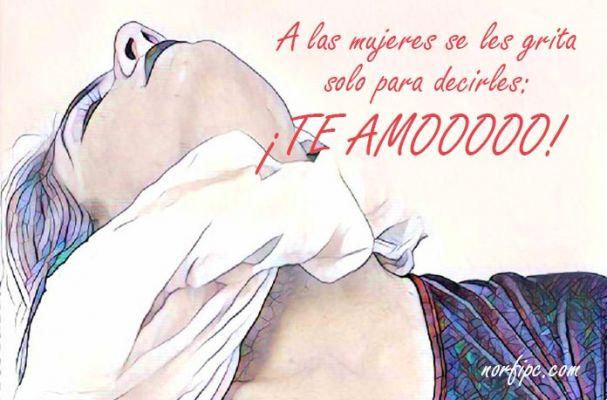 Here is a collection of phrases about respect for women, to celebrate their commitment and effort in building a better society.

Women are powerful individuals as well as the center of humanity.

From any housework to the most complex tasks in today's world, a woman is highly efficient and intuitive. A woman can do most of the work with great poise and grace.

There were times when women were considered weak. Both then and today, a woman has always been quietly strong, waiting for the world to recognize her tireless efforts to be treated fairly and with the same respect as any other man. Respecting a woman is not asking too much. Every woman deserves respect, comfort and care. A mother, sister, wife, or any girl, they all deserve unconditional love and want to be treated humanely. Every woman should be treated well, respected and loved. After all, she was born into this world as a man. She has a smart mind, great abilities and all that! You must treat your woman with due respect, as well as with great sweetness.

Treat a woman well, because that's what real men do.

Next, we have compiled a collection of phrases about respect for women, which everyone should read, both men and women.

In addition to these phrases, we have compiled others that may be of interest to you, such as phrases against violence against women, phrases about Respect in general and phrases about respect for your partner.

Phrases about respect for women

Let us know if you have a favorite quote about men, women, respect for yourself and others.


PS: You can find all the images of these phrases on our Pinterest Board

1. "When a woman talks to you, listen to what she says with her eyes."

3. "A woman brought you into the world, so you have no right to disrespect her."

4. "You have no right to be called a man if you have no respect for women."

5. “Men who love their mothers treat women wonderfully. And they have enormous respect for women."

6. “You must respect each other and refrain from disputes; They shouldn't repel each other, like water and oil, but should mix, like milk and water."

7. “Having two daughters has changed my perspective on a lot of things, and I definitely have a new respect for women. And I think I've finally become a good and true man since I had a daughter."

Phrases on how to treat a woman.


8. "Men and women have roles: their roles are different but their rights are the same."

9. “We respect women and we don't insult them by saying that all they care about is reproductive rights. All issues are women's issues."

11. "My sisters and my mother taught me to respect women and open doors for them."

12. "A man never displays his strength so beautifully as when he respects a woman's sweetness."

13. “This is not just about women. Human beings must also recognize the role we play. Real men treat women with the dignity and respect they deserve."

14. “No man is successful without a good woman behind him, wife or mother. If it is both, then he is doubly blessed."

15. "The men who have the most respect for women are rarely popular with them."

16. "Treat people with respect and do it also with feelings, what you expect from others is what you have to give first."

17. "We must educate our boys to respect women and our girls to demand respect and derive their values ​​from more than just their looks."

19. "Respect is one of the greatest expressions of love."

20. “Your biceps, sculpted abs, and fearless attitude are worth nothing if you can't protect and respect women!”

Phrases about the importance of women

Here you will find phrases about how important it is to respect a woman.

21. "The beauty of a woman must be seen through her eyes because that is the door of her heart, the place where love resides."

22. “I have two sisters and a mother, of course, so I grew up with a family of girls. Maybe I have more respect for women for that."

23. “In some respects, women are superior to men. She has a more tender heart, more receptive, her intuition is more intense ".

24. "Women are the half of society giving birth to the other half, so it's like they're the whole of society."

25. "Stop messing around with women you're not qualified for."

26. "God requires you to treat women well, because they are your mothers, daughters, aunts."

27. "I still believe in the old ways of showing respect and honor to a woman!"

Phrases about the respect that women have for themselves

29. "The measure of any society is how it treats its women and girls."

32. "Have respect for yourself and no one can take it away from you."

33. "We respect women for the hard work they do; we respect everyone, men and women, for the value they bring to the workplace."

34. "We respect the dignity of women to make their own decisions about the size and timing of their families."

35. "Everyone should be respected as an individual, but no one idolized."

Other phrases about Respect for Women

My mother and sister taught me to respect women and to open the door for them. ~ Milo Ventimiglia

You see, Paolino, your mother is a great woman, and we must have great respect for her. But she thinks like a woman. ~ Alberto Sordi

An ugly woman certainly has an advantage over a pretty one. She gets used to using her brain and fighting her own battles. ~ ricardo george rogers

Men have much more free time than women. On the one hand, they marry late and, on the other hand, they die earlier. ~ Henry Louis Mencken

In courage of self-sacrifice, woman is always superior to man, just as I believe that man is superior to woman in courage in brutal actions. ~ Mahatma Gandhi

We all need and ask for respect, male or female, black or white. It is our basic human right. ~ Aretha Franklin

I respect the institution of marriage. I have always thought that every woman should marry, and no man. ~ Benjamin Disraeli

It is difficult for those who wear skirts to keep a big secret in the chest; Although in this respect there are men worse than women. ~ Jean de La Fontaine

There is a strange bad faith in reconciling contempt for women with the respect with which the mother surrounds herself. ~ Simone de Beauvoir

A woman who has two orgasms a week has a 30 percent lower risk of wrinkles than others. ~ Tzai ben Zion

Men who love their mothers treat women well and respect them. ~ ellen Barkin

Like the woman, the horse does not love the weak, much less respect them. ~ Alexander Alvisi

Men who have the utmost respect for women rarely enjoy popularity with each other. ~ Joseph Addison

Women should not only be respected. They should be considered totally equal. ~ Myrta Merlino

Compared to other countries, Spain is not used to this debate: however, I believe that the presence of a woman, of a mother, is fundamental. ~ Christian Malgioglio

Before sex, women need esteem and respect. And I respect and respect them all. ~ Quotes from Franco Califano

It is rare that men who have the utmost respect for women enjoy popularity with each other. ~ Joseph Addison

Some reflections on respect for women

A real man will never hurt a woman. Be a real man and respect women.

If you don't respect it, you certainly don't deserve it.

Respect for women is one of the greatest gifts a father can show a son.

Remember that a woman brought you into this world, so you have no right to disrespect any of them.

The most beautiful thing a woman can wear is confidence.

Respect is earned, not given. Deserved, not inherited.

Treat a woman well and you will be well treated by her.

Call me old-fashioned but I think respect for women is one of the most important things to support in life.

The strength of a woman cannot be seen with the naked eye. She can only feel it when times get tough and she's the only one left standing.

Nothing is stronger than a woman who fights for what she believes in.

She is not just a housewife who cooks your meals and does your laundry. She is a stay at home mom who keeps the family together and makes sure everything is as perfect as possible once you get home.

A successful woman is one who can build a solid foundation with the bricks that others have thrown at her.

A speech to all women who do not make themselves respected

Woman, be the first to respect yourself and to reject and oppose any situation in which you are not respected.

Do not submit to work commitments or you will become an accomplice of those who believe that your work and effort are worth less than those of a man.

Do not submit to the society that at 30 you would like to see yourself with children, if this is not part of your disposition.

Do not destroy your body to follow the ideals of beauty, created specifically to satisfy men: those who truly love you will see in you the most beautiful woman in the universe.

Do not reserve your precious love for those who despise you and do not love you for who you are. Do not give in to those who want you differently, to those who see you as an object to show off or see you as a servant.

Don't give up on your plans and don't let your dreams die while you're trying to make someone else's.

Do not sacrifice your happiness believing that it depends on someone else's. Remember that you are the only person who should take care of the most in the first place.

Stay away from the worm that fears your intelligence so much that it despises it only because it wants you to doubt it so that it can deceive itself into being your equal.

Mercilessly trample on the false love of the beast that by saying love hurts your body and annihilates your self-esteem.

And you, women who can, fight for this to finally come to an end. Union make force. And the strength of women is worthy of the deepest, greatest and most deserved respect.

Living in Color: the most beautiful phrases

Phrases Against The Ex: 40 Phrases Full Of Cynicism.

Phrases about Mom: the 100 most beautiful to dedicate

Phrases to Congratulate an Important Success

Phrases to Silence a Person: The 100 Most Cynical

40 Harry Potter Quotes That Will Inspire You In Teal Life

add a comment of Phrases about respecting women: 37 quotes to support and celebrate them