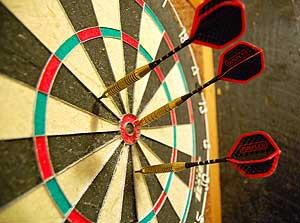 A popular saying states that "the world is full of good intentions" and I would add also di
lofty goals. But just see how things go ... in reality.

Maybe because, as they say, there is something between saying and doing
half the sea !? Of course it is one thing to aim to reach a hundred or a thousand
different goals and quite another to really achieve them. So it happens that good
part of the goals we propose remain in our dreams and will not come
never made. However, there are some very simple techniques that allow us
to achieve personal goals, only by resorting to common sense and
organizational spirit. 1. Stop
fantasize: many people can spend weeks or months a
imagine making your dreams come true but not in everyday life
they do nothing to succeed in this. In fact, it has been proven
scientifically that fantasizing doesn't help. In short, once imagined the
ideal situation it is time to put your hand to work. 2. Simply… it begins: very
we often have a perfectly calculated plan that would allow us to
realize at least in part what we have always dreamed of, but we postpone it indefinitely
to the point that when we decide to start it is too late, now the
original plan is no longer viable because in the meantime the conditions
external have changed. All those who wish to reach a goal must
keep in mind that “after is always
too late". 3.
Visualize the process, not the result: we all have a tendency to
imagine the result that rewards our efforts, and this is good because there
motivates us to continue on the journey. However, it would be much more practical to make an effort
to imagine the path because in this way we will be able to prevent obstacles e
reorganize our strategy long before we collide with the crude
reality. In a 1999 study by the University of California, yes
it could be found that students who strove to visualize the
study path rather than the final results, they obtained better
placements. 4. Reject i
automatic behaviors: sometimes we find ourselves involved in a routine
daily that has nothing to do with the projects we have in mind
for our future. It is seriously worth taking a break for
seriously reflect, restructure our habits, change and include
activities and choices that really respond to what we want to achieve. 5. Avoid
think in terms of: "but who cares": When we determined
a goal and in our mind the thought "but who cares" arises, this is synonymous with the fact that we are exhausted. Self
we succumb to this kind of thinking and give up discipline
that we have imposed before, it will be difficult to resume the path. Finally, it is
always wise not to give in to the first discouragement because later on we will have others
moments of despair. 6. Alterna i
points to focus on: Sometimes it is demotivating to focus only on the goal
final, since this is perceived as too far; in these moments
it is better to set goals that are closer and more easily achievable than
they will serve as an incentive to continue on the path. On the contrary, when the activity
that we are doing is too boring and demotivating, then it will be more appropriate
focus on the final goal. 7. Hold a
emergency plan: Unfortunately you don't always get it
achieve the desired goals on the first try. Sometimes you need to
review the master plan several times or have an emergency plan in place
includes less ambitious but still rewarding goals. Finally, if you really want to reach yours
goals without committing suicide in the attempt, you must protect yourself from "hidden costs".
This phenomenon was described in 1985 by psychologists from the University of Ohio,
who found that the more people invest in a project, the more they tend
to think that the same will be successful. Thus, the original investment causes that
the person continues to focus on the success of the project even at the cost of
losing one's emotional balance.
From heroes to "plagued": a society that attacks its health does not deserve them ❯

add a comment of Personal growth: seven techniques to achieve our goals