Il pepper, scientifically known as Capiscum annuum, is a shrub that belongs to the Solanaceae family. Green, red or yellow, its fruits arrived in Europe from the South American continent thousands of years ago and today they are cultivated in the country and around the world in many varieties.

It is a precious, rich and healthy vegetable, which brings significant benefits to the body. As is known, peppers contain good amounts of Vitamin C, but also vitamin A, phosphorus, potassium, calcium and iron; I'm ideal for purifying and slimming diets, as more than 90% are made up of water.

Their action is also important to combat aging and the formation of diseases: they are in fact powerful antioxidants and protect against cardiovascular disorders, preventing the formation of tumors. Finally, their content should not be forgotten fiber, which generates a mild laxative effect in the body.

How many types of peppers are there?

Peppers can be of various kinds: yellow or red, more sweetish, ideal for risotto, to dress pasta and to be grilled. Or green, spicy or not, with a less sweet taste, which is well suited to being cooked with potatoes and accompanied with cheeses. Other varieties are represented by chili Peppers spicy or ornamentali, such as cayenne pepper or jalapeño.

Others even less known in the country are the tabasco and the rocoto, for example, varieties that resist even at -5 ° C for short periods, while the habanero is very sensitive to the sun. There are varieties that have purple flowers and black seeds, streaks on the fruit or spots on the corolla.


The main substance behind the spiciness of pepper is called capsaicin alkaloid. Each capsacinoid has a different relative spiciness and taste in the mouth, and a variation in the proportions of these substances determines the different sensations produced by the different varieties, as well as their content.

Peppers among the vegetables of the summer

The pepper in the kitchen

Shiny and firm, without bruises and with smooth and well taut skin, with the stalk well attached: if so, you have chosen good peppers!

This vegetable it can be kept in the refrigerator for about five days, or it can also be put in oil or vinegar. Hot peppers can be dried and stored under glass.

Raw, in salads or with pinzimonio, fried or grilled or accompanied by various dishes, they become excellent with other vegetables in peperonata or to prepare stuffed peppers.

Ingredients
> 300 grams of rice,
> 2 peppers (red and yellow),
> an onion,
> parsley,
> a glass of dry white wine,
> extra virgin olive oil,
> a knob of butter,
> a sprinkling of grated Parmesan cheese,
> half a liter of vegetable broth.

Sauté the chopped onion in extra virgin olive oil over low heat, add the peppers cleaned from the seeds and cut into cubes. Sauté for three minutes, add the rice and let it toast. Then add the wine and add the broth, leaving it to cook for the cooking time of the rice, gradually adding the broth. When the rice is cooked, remove it from the heat and stir in the butter, a little fresh parsley and grated parmesan.

Curiosity: the spiciness of chillies is usually measured using the Scoville scale. The single measurement world record goes to the Trinidad Scorpion Moroga, the Trinidadian Scorpion, originally from the Moruga district of Trinidad and Tobago. This pepper is classified in 2012 as the hottest in the world, having a very high concentration of capsaicin! 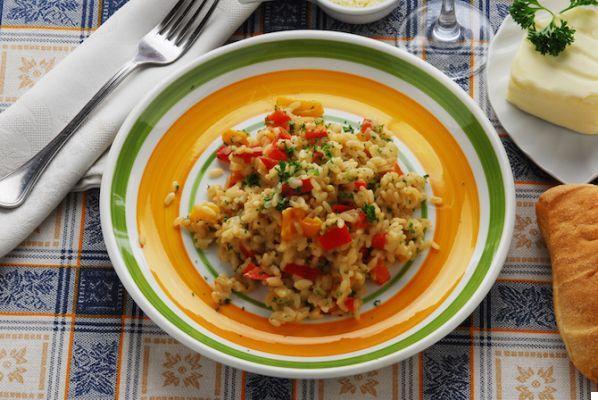 add a comment of Peppers: properties, benefits and recipes