Pectoral Machine | What is that? Variants and Exercises

Pectoral Machine: What is it?

The Pectoral Machine is probably the most famous and well known among the isotonic machines, always featured in movies and sports that show gyms. But what are we talking about?

In detail, the pectoral machine was designed to isolate the major and minor pectoral, the chest muscles by imposing a semicircular cross-guided movement. Promotes the maximum exclusion of the synergistic and stabilizing musculature, further isolating the work on the pectoralis major.

This tool has evolved in the anni'90 and each gym has a Pectoral Machine in its equipment. The pectoral cross movements stress the entire muscle mass of the pectorals and in particular the muscles of the upper body, especially the sternal head of the pectoralis major.

Recent research has reported, through electromyographic (EMG) measurement, that the muscle activation of the pectoralis major and the anterior deltoid did not differ between the pectoral machine and the barbell bench press (Rocha Júnior et al., 2007).

Variants of the Pectoral Machine

The first variant has some padding positioned at shoulder height on which the elbows are placed, leading to position the extra-rotated arm with the forearm flexed at 90 ° vertically (see figure). In this case the pushing movement is given by the elbows resting on the padding, creating the semicircle movement typical of crosses. 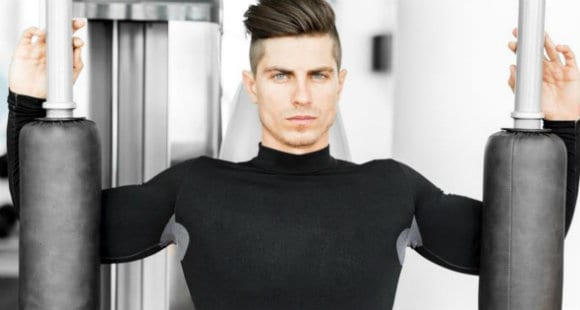 This first type of machine is the most disadvantageous for the joint health of the shoulder. This variant leads to increased joint stress of the shoulder due to the overload on the joint capsule given by the excessive external rotation and horizontal hyperextension of the arm.

The second variant is equipped with normal handles rather than padding. This time the forearms are extended, and the pushing movement is borne by the palms rather than the elbows, allowing greater internal rotation of the arm, more beneficial for the shoulder joint. In this case the grip on the handles is neutral, and the hands, elbows and shoulders are on the same (transverse) work plane. 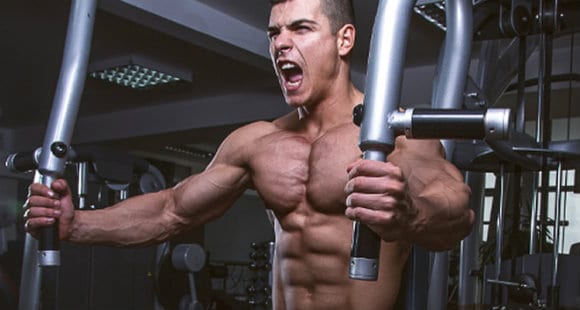 The highly constrained pectoral machine movement may be more suitable for newbies, given the ease of execution common in most strength machines. However, precisely for the reduced degree of activation of the stabilizing and synergistic muscles of the shoulder, this can present itself as a disadvantage for the purpose of strengthening the musculature that guarantees the stabilization of the scapulohumeral joint, such as the rotator cuff, therefore not representing the most suitable choice for rehabilitation from injuries.

What is more, the rigid trajectory e bound it is not properly physiological in articular terms (especially with the arm extra-rotated), further reiterating the inadequacy compared to other variants of the crosses, further confirmed by the position of the arm which is often disadvantageous and more burdensome for the joint.

It would therefore be considered better the variant with handles, or it is also possible to change the position of the arm by placing the palms of the hands on the padding rather than the elbows to avoid the disadvantageous position of the arm over-rotated and hyperextended horizontally.

Le crosses to the chest machine they are a complementary exercise of pure isolation that is not aimed at creating muscle mass, but rather participates in the construction of muscles in synergy with the other exercises for the pectorals.


Being a machine not aimed at mass production, but more aimed at defining the internal bib, no high loads are needed, but medium-low, with a range of medium-high repetitions, above 10, with slow and controlled movements, to stimulate the resistance components of the pectoral muscles.

Adjust the seat according to the height of the user using the machine so that the feet are positioned comfortably on the floor, the arms must be at the same height as the deltoids and the forearm at 90 ° with the arm.

Once you have selected the appropriate weight for you (excessive weight will cause excessive stress to the joint) with the selector, and sitting with your back resting against the backrest, rest the inside of the arms on the pillows.

The elbows should be level with the shoulders or slightly below, not above. Grasp the handles with your hands. Now you will find yourself in the eccentric phase (the pectorals are stretched) with the ribcage expanded and the lumbar arches (lower back). To contract the pectorals now, it will be enough to approach with the arms in that position without touching each other, keep the position from 3 to 5 seconds and then return to the starting position.


It is advisable to use the previously indicated position with which the palms are placed on the padded pads to avoid subjecting the shoulder joints to excessive stress.

In the eccentric phase try to keep the movement fluid but not excessively fast. Now let's move on to breathing.

THEexpiration must be performed during the approach of the elbows (concentric phase),inspiration during the'abduction of the arms (eccentric phase). To concentrate maximum work on the pectorals, the shoulder blades must be kept close together (closed back) and don't bring your shoulders forward. Who has a position kyphotic, therefore with the chest closed and the shoulders forward, it will tend to push in a large percentage with the deltoids and not with the chest.

When working on a pec machine, as we have said, the major and minor bib, i chest muscles. These muscles are easier to isolate on a pec machine than others due to the fact that the movement requires less balance and control.

The machine creates a safer exercise as resistance is dictated by our strength and can be done safely without one spotter (the guy you ask for help to take off the dumbbells on the bench or who saves your life while you are choking under the barbell…). Among the main advantages, therefore, is the ability to muscle isolation and the ability to work without a spotter, plus it remains extremely easy to increase the intensity.

The machine adds an element of safety, since the weight is not directly on us and will not fall on us in case of failure.

Obviously, however, an incorrect use is not free of risksIndeed, it is very easy to create stress on the shoulder, back and neck joints. It is important to always make sure that the working position is correct on the seat, with the arms in alignment with the levers without hyperextension in the shoulders.

Always adjust the seat to a suitable size before starting any exercise, remember that the chest machine is only effective if the exercises are performed in a controlled and correct manner.

Audio Video Pectoral Machine | What is that? Variants and Exercises
Vibrating Platform | It works? Benefits And Contraindications ❯

add a comment of Pectoral Machine | What is that? Variants and Exercises