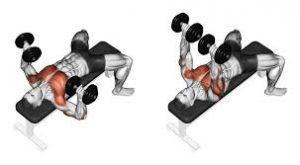 Powerlifters are athletes who aim to lift as much weight as possible in three exercises: the squat, the bench press, and the deadlift. The only exercise that focuses on the upper body, however, is the bench press. Because of this, when you want to strengthen the pectorals and the other muscles of the trunk, it is very useful to imitate the powerlifters and train on the bench. To make the chest workout even more effective, it helps to combine bench presses with other chest-specific exercises.

Bench press exercises are among the main exercises to train the upper body and, specifically, the pectorals. This is why they should play a central role in the training routine when the goal is to strengthen the core muscles. Bench pressing allows you to get stronger lifting as much weight as possible in a few repetitions: in fact, repeating the exercise for a limited number of times allows you to use more weight.

Bench with barbell
When the goal is to increase strength, execute da one to six reps per set and three to six sets for training.

Warning! For those suffering from low back pain, it is advisable to bend the knees, cross the legs and leave them suspended;

Note: by regulation, powerlifters cannot exceed 81 cm between one index finger and another, which is why the "longer" athletes may be forced to tighten their grip excessively despite the above criteria.

After the bench press, it is good to move on to what in technical jargon are called "accessory" exercises, which will help train the muscles that play a fundamental role in bench presses, mainly the chest, shoulders and triceps. These exercises will further develop the chest muscles, which is why they are a must in the chest workout. Both exercises proposed below are a variant of the crosses o aperture, an exercise that consists in bringing the arms on the torso, almost like a bird flapping its wings. In this case they can be done higher repetitions because the movements are designed to build muscle mass, while the bench press serves more to strengthen the muscles.

Crosses or openings with dumbbells

This exercise works on the chest muscles without tiring many other muscles. However, this should only be done if your shoulders are healthy and you can feel a contraction in the chest muscles. To execute three sets of 10 repetitions. Take two dumbbells and lie down on the bench with the weights in hand.

This variation mimics the previous movement and involves the chest forcing the arms to join. To execute three sets of six reps on each side.

With this exercise, you train the lower chest area, which will help to give your chest and chest a defined, well-rounded look. As this is a challenging exercise to master, start with a lighter weight or no weight on the barbell to improve your execution first and master the movement. To execute one to six reps per set and three to six sets for each chest workout.