By the healthiergang writer , personal trainer, athlete and student in Sports Science.

The pushups performed at the parallels, more commonly called dip in the verbal language, are a multiarticular exercise.

We position ourselves suspended on the parallels with arms outstretched. The grip can be neutral or neutral / prone and the distance between the hands can vary from even, to more than shoulder width.

The arms are straight and the body tilted forward depending on the distance between the hands. The execution consists of a controlled descent of the body until the shoulder is horizontally aligned with the elbow or slightly below it from a lateral view. 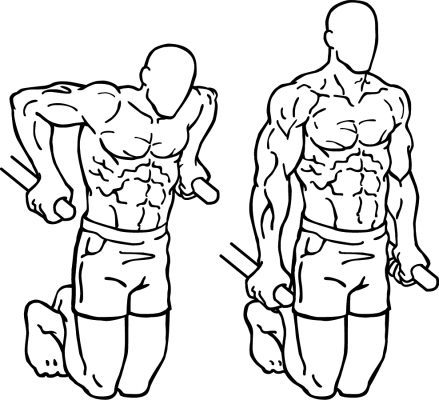 If the action just described is done with the elbows pointing outwards, or rather with the shoulders internally rotated, they also undergo abduction. At this point, you push yourself into the starting position controlling the movement. In this phase the elbows extend, the shoulders flex and adduce if during the descent they have been left free to abduct, and the shoulder blades rotate downward as they are abducted.

That said, there are many variations of this exercise I will now mention a few, those that highlight a greater stress in the different muscle groups depending on the choice of handle and execution.

“When you think of dips, you usually think of chin-ups [tight grip pull-ups]. When the dips are combined with the pull-ups, as they often did in the old days, you get a great combination for [stimulating] the upper body. Even if you don't do crosses, pulldowns [lat machines], triceps pressdowns, or biceps curls - it is possible to develop great strength and muscle mass for the upper body with pull-ups and dips. If you doubt me, just look at the upper body development of gymnasts, whose conditioning programs usually don't include barbells and dumbbells. Pull-ups and dips are, as I like to call them, the exercises that value your effort the most. […] The dips work the front shoulders, pectorals and triceps - many of the same muscle groups stimulated with the flat bench press. On my list of the absolute best exercises for triceps, I'd be hard-pressed to find one comparable to dips. "(Charles Poliquin)

More normally they expect one trajectory of the arm three-dimensional intermediate between the frontal, sagittal and transverse planes, therefore a cross between adduction-abduction, flexion-extension and horizontal flexion-horizontal extension. In some cases the work surface can be frontal, providing a movement very close to the pure one adduction-abduction of the arm. 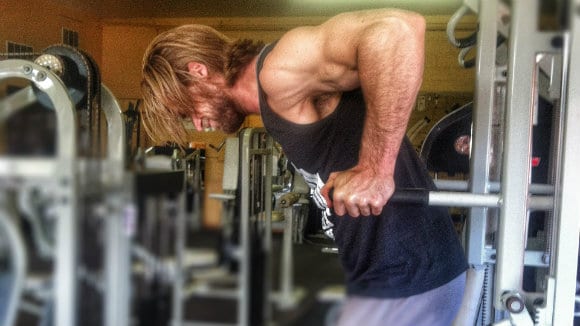 The inclination of the torso, in conjunction with elbows widening it should allow to limit the work of the great dorsal and great round muscles, and to imitate the gesture of the declined bench press, an exercise in which the pectoralis major muscle is stressed in an important way, in particular with its lower bundles

They foresee a trajectory of the arm closer to the sagittal plane, then a flexion / extension of the shoulder. The body in this case is located completely vertically, and this causes in the peak of the eccentric phase the shoulder potentially reaches a greater degree of hyperextension and the pectoralis major undergoes greater elongation (especially with the clavicular bundles), due toincrease in the angle between the arm and the trunk.


This movement, practicable at parallels, is also typical of dip your panca.

1. in dip for the chest the arm moves more often in an intermediate three-dimensional plane between the frontal, the sagittal and the transverse, or performs a pure adduction (frontal plane) if the elbows are kept very wide and the torso vertical.

2. in dip for triceps the arm moves in a two-dimensional plane closer to the sagittal, by means of a flexion in the concentric phase starting from a high degree of hyperextension, and an extension in the eccentric phase.

Having made this clarification I can tell you that in any way you perform the dip exercise, you will always involve the muscle groups mentioned above, but to be clear you will stress the pectoral muscles more in the first case and the triceps muscles in the second.

It can be done both with free body and with overloads through a belt with tied weights, done in synergy with exercises such as tractions, they do a complete work for the upper body with excellent results for theincreased strength and hypertrophy.

Audio Video Parallel Dip (Bendings) | Muscles Involved and Correct Execution
Dip Machine | How Do You Perform Stretches Or Dips On The Machine? ❯