Omega 3 in the Diet 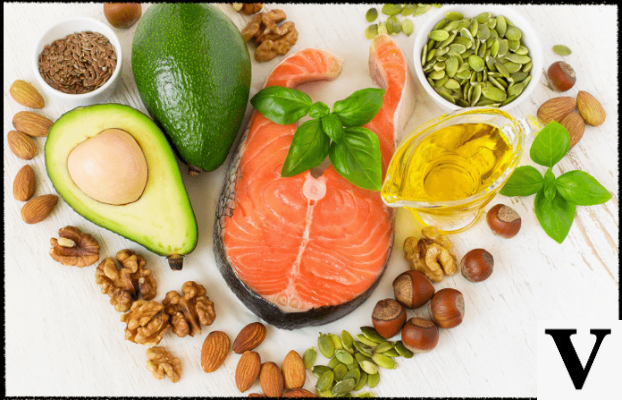 In this article the "absolute" and "relative" amount of essential fatty acids (AGE) in four daily diet menus was calculated. This is a small study that will help us understand "if" the intake of these nutrients in the diet can be considered satisfactory and, if not, why.

There are two essential fatty acids:

Remember that the fatty acids belonging to the omega three and omega six series are all polyunsaturated.


Omega six are mainly of vegetable origin (with the exception of AA), while omega three fatty acids tend to be of animal origin (fishery products or derivatives) and algal origin.

The purpose of this study is to evaluate the opportunity to take omega three supplements to rebalance the dietary ratio between omega 3 and omega 6 in the diet.

Values ​​extracted from the databases of official research institutes in your country and in the United States were used for the nutritional translation.

As can be seen from the consultation of the tables below, the ω3 / ω6 ratio is kept at optimal levels when at least one significant source of omega three (fish or seeds and linseed oil) is present in the daily menu.

On the contrary, in the days in which this contribution is lacking, values ​​are recorded that are decidedly lower than those recommended (ie a deficiency of ω3 compared to ω6).


The situation is further aggravated by the massive consumption of dried fruit and certain vegetable oils.

This is where the concept of balanced nutrition emerges.

By balanced diet we mean a correct way of eating both from a quantitative and qualitative point of view.

The balanced diet is aimed at ensuring an adequate supply of energy and nutrients, preventing both nutritional deficiencies and excesses (both harmful).

To be balanced, nutrition must also be varied. In this way, in fact, it is more likely that all the nutrients the body needs are taken in the right quantities.

Furthermore, the negative consequences deriving from the ingestion of potentially harmful substances, which may be present from the origin or formed following the food processing, storage and cooking processes, are minimized.

Dried fruit and vegetable oils, frequently praised for their nutritional properties, can become inadequate if recklessly added to the diet in excess (which can become unbalanced).

If you want to make frequent and systematic use of oil seeds or seed oils (or part of them, such as the "germ"), it is necessary to deepen the chemical composition of fatty acids.

It is recommended to select products that use a high omega 3 content and a low omega 6 concentration.