Omega 3: benefits, contraindications, where they are found 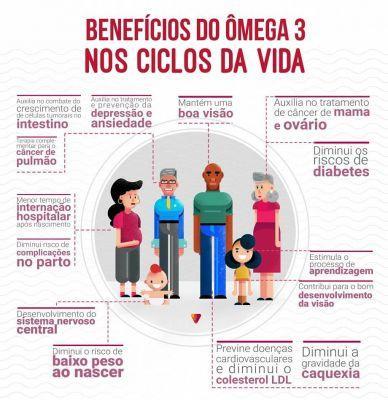 Omega-3s are polyunsaturated fatty acids defined as "essential" because our body is unable to produce them independently and it is necessary to introduce them with food.

They fall within the nutritional class of lipids and they are called "polyunsaturated" because in their structure there are several double bonds between the carbon atoms.

We find the first double bond right at the third carbon atom, which is why they are called Omega-3.

Even the Omega-6 they are essential polyunsaturated fatty acids, but in this case the first double bond is positioned at the sixth carbon atom.

Compared to Omega-3s, Omega-6s seem to be more present in the Western diet and this would lead to an imbalance in the omega-3 / omega-6 ratio which, as we will see, can lead to a greater risk of getting sick.

Fatty acids they are almost never found in free form in nature, but fall within the composition of more complex molecules, including:


What are Omega-3s for

An excess of omega 6 is associated with a greater inflammatory state which, if chronic, could increase the risk of getting sick.

Inflammation, in fact, is the main cause of the onset of chronic diseases, therefore, due to their anti-inflammatory properties, omega-3s are useful in preventing:

Where are omega 3s found

As we have seen, a deficiency in omega-3 fatty acids may be related to an increased risk of some diseases, especially cardiovascular, neurodegenerative and autoimmune.

It's important introduce the right amount through food, as our body is unable to self-produce them.

According to the LARN (Reference levels of intake for the population and the country) an adult should take about 250 mg per day. Where can we find them?

The omega-3s DHA and EPA are found mainly in blue fish, such as salmon, anchovies, sardines and mackerel, while ALA is found in plant foods, including flax seeds, chia seeds, and walnuts.
Consuming these foods regularly in the recommended quantities is sufficient to meet the omega-3 requirement and there is no need for any supplementation.

Today the market offers a large variety of omega-3 supplements, especially based on fish oil, which can be useful only in case of deficiencies or non-consumption of the foods mentioned.

In fact, some studies have observed how a surplus of omega-3s taken through supplementation has no additional effect.

To date there are no contraindications for Omega-3s, however there are possible effects due to an overdose and it is recommended to do be careful in those who are being treated with anticoagulant drugs as they could enhance its effect.

10 foods rich in healthy fats
The 10 benefits of chia seeds, rich in omega 3
Foods and omega 3 fatty acids
Seasonal allergy: let's also treat ourselves with omega 3
The seeds that contain essential fatty acids
Linseed oil, a mine of omega 3
Do Omega 3 Help You Lose Weight?
Omega 3 supplements in pregnancy
Foods rich in omega 3 against brain aging
Cod liver oil rich in omega 3: price and where to buy it
Omega 3 for weight loss
The main sources of Omega 3
Omega 3 and chronic bronchitis

add a comment of Omega 3: benefits, contraindications, where they are found