Nutrition and Cancer: Is There a Diet Against Cancer?

Is there a relationship between diet and cancer?

Yes, there are several relationships between diet and cancer.
On the other hand, these relationships are difficult to interpret and often the simple statistical correlation does not provide a sufficiently exhaustive overview.
Diet, from the Latin “diaeta” which means “lifestyle”, is certainly a virtually protective or prone factor for various forms of cancer.
In this article we will deal with very delicate but important topics for discovering the currently known and proven relationships between what we eat and oncological pathologies.

Western diet: does it favor the onset of cancer?

For several years, numerous medical researches have followed one another, between confirmations and denials, to try to answer the recurring questions concerning the importance of diet for the birth or prevention of cancer.
According to current knowledge, in Western countries, around 20-30% of cancers could be "avoided" thanks to a correct diet.
In addition to the nutritional composition of the diet (modified by the preference of some foods rather than others), a very important aspect concerns the association between: lifestyle - understood as incorrect diet and sedentary lifestyle - spread of overweight or obesity - and the onset of certain pathologies oncological.

The relationship between diet and carcinogenesis was also discovered through the study of the incidence of some types of cancer in relation to the geographical area of ​​belonging.
It has thus been found that certain cancers are more frequent in some countries than others.
Further research has also shown that the risk of developing these diet-related cancers tends to level out in people who have permanently moved from low-risk to high-risk countries, adopting the lifestyle and eating habits typical of the latter. .
This reduces the importance of the genetic component and supports the role of habits as a risk factor for some types of cancer.
These differences are often notable. According to WHO data 1996:

In any case, no food in particular has been identified as significantly protective or causal.
The only certain relationship seems to be that between excessive fat consumption, breast cancer in women and colon cancer in both males and females.
Alcohol abuse, on the other hand, is an important predisposing factor for the development of liver cirrhosis and various types of tumors.

What is stated in the previous paragraph may seem reductive. Nutrition education, which is currently being disclosed in every media channel, seems to support many theses that we have not mentioned so far.
In fact, many of these correlations (positive or negative) concern specific nutrients and nutritional factors, NOT food itself.
In addition to this, most studies may be able to demonstrate a chemical reaction or a cellular mechanism, but - for methodological and developmental issues - will hardly be able to support firm claims on any long-term repercussions.

What are the main diet related cancers?

Statistics suggest that the most frequently diet-related cancers involve:

Does red meat cause cancer?

In October 2015, the International Agency for Research on Cancer (IARC), part of the WHO (World Health Organization), listed PROCESSED meat among the substances that can cause cancer in men.
This news, which was given wide media coverage, aroused excessive and unjustified alarmism in the population, thanks to coarse and misleading information.
So let's try to clarify some fundamental aspects present in the scientific publication relating to this event.

What cancers should red meat cause?

So we're talking about a relationship that IS NOT ABOUT ALL TYPES OF CANCER, BUT ONLY COLON RECTAL CANCER and possibly stomach cancer.

Which red meats are related to cancer?

Another very important aspect concerns the quality of the meat, since the study explicitly mentions:

“PROCESSED meats, that is salted, dried, fermented, smoked, treated with preservatives to improve their flavor or conservation”.

We are therefore not talking about fresh meats, but about preserved meats (cured meats, especially if smoked, canned meats and meat-based sauces).
The study, therefore, does not discover anything new, given that for years the dangerousness of the preservatives used in processed meats (in particular nitrates and even more nitrites) has been known.

With all due respect to vegans, the relationship between meat and colon cancer is NOT certain for the classic “Florentine steak” (your country's variant of the more contained Anglo-Saxon T-Bone Steak) and for other fresh red meats.

To get a correct view, the statistics should still be differentiated by type and cut of meat.
Probably, for example, the oncogenic risk is significant for those who consume 200 grams of pork sausages per day, while it is not for those who consume similar quantities of beef tenderloin.
It goes without saying that, respecting the portions and the frequency of consumption suggested for a healthy and correct diet, none of the foods mentioned could be defined as carcinogenic.

Method of cooking: does it affect the chances of cancer?

As for fresh meat, remember that the cooking method at high temperatures generates toxic and carcinogenic substances.
Lean fresh meat does not appear to be carcinogenic and this is all the more true the more sober the cooking; to be clear, we should avoid burning parts of the food, giving up the classic "black stripes or scratches" left by the grill and the grill pan.

Grills: which are considered safer and which are more harmful?

Still with regard to grilling, there is also a significant difference as regards the type of fuel and the method of heat transmission.
There are basically 3 types of grids:

Note: barbecue enthusiasts do not want me for this forced simplification; the description of the most complex processing tools is beyond the scope of the article.

We have specified that the molecules harmful to health involved in grilling are the residues of combustion. These can come from:

In practice, the cooking / carbonization of various molecules such as proteins, fats, carbohydrates and wood itself (for the embers) is responsible for the release of toxic by-products such as: polycyclic aromatic hydrocarbons, acrolein, acrylamide, formaldehyde etc.
So, having to make a ranking of the more or less dangerous grids, we could specify the following:

Coffee: can be harmful

Without going into too much detail as regards the suitable and less suitable foods in the diet, which we will explain more precisely in the article Diet to Prevent Cancer, it is necessary to make a clarification on coffee.
This drink, widely consumed in your country and in the rest of Western countries, is produced by infusing a powder obtained from the grinding of roasted seeds.
Raw coffee is green in color; after roasting it becomes dark brown. Only this detail (strong Maillard reaction) should make us understand that the food is a potential carrier of unwanted molecules.
Coffee powder contains a small amount of acrylamide, a carbonization residue strongly feared for its toxic and carcinogenic effects; the food that contains the most are french fries.
On the other hand, if it is true that two cups of coffee a day cannot harm your health, the discussion changes regarding excessive quantities; the abuse of coffee is widespread.
It is therefore useless to follow a strict diet if many coffees are consumed a day.

Relationship between tumors and other risk factors

It is logical to expect that the consumption of preserved meat is more common among the population groups who are generally less attentive to nutrition and their own health.
Conversely, among vegetarians and vegans the attention towards their own health is generally greater; in this group, it is therefore logical to expect lower percentages of smokers, alcoholics and overweight people, greater attention to physical activity and a greater intake of antioxidants, dietary fiber and other protective nutrients for colon and stomach cancer and prostate.


A serious and reliable comparison should therefore be made between two populations with the same risk factors, except for the one you intend to evaluate.
Considering only the nutritional aspect or further reducing the comparison to only one food group leads to big blunders.
This has led many experts to overstate the alleged benefits of a vegetarian or vegan diet as an element of cancer prevention.

How important is lifestyle in the onset of cancer?

Improper diet is just one of the many factors involved in the development of a tumor.
The diet is in fact part of the large family of modifiable risk factors, as they are related to the person's lifestyle.
It is therefore not a question of eating only correctly, but also of carrying out regular physical activity, avoiding as much as possible alcohol, drugs, excessive sun exposure and drug abuse. 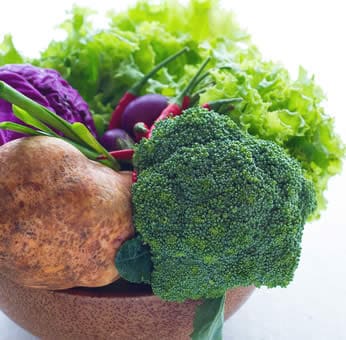 Vegetables, for example, can exert a protective action against lung cancer, but this benefit may be insufficient if the person who consumes them regularly is a heavy smoker.
Obesity, in which it is possible to recognize a food component (diet) and a behavioral one (sedentary lifestyle), is an important risk factor for many types of cancer, such as breast, colorectal, prostate, cervix, ovary and esophagus.

Finally, let's not forget where the food comes from.
Foods of dubious origin can be a vehicle for carcinogens; this is the case with pollutants and pesticides. They seem to be more exposed to these contaminants:

Furthermore, many people, frightened by the criticality of farms and agriculture, try their hand at picking mushrooms (pioppini, field mushrooms, pleurotus, etc.), vegetables (wild radicchio, dandelion, hops, etc.), fruits (blackberries, cherries, etc.) and molluscs. wild (especially mussels).
It must be borne in mind that these resources are NOT at all exempt from contamination, especially with regard to environmental pollutants, herbicides, heavy metals and algal or fungal toxins.
Sometimes there is a greater risk of harvesting a product in the wild than buying it from guaranteed sources.


Is there an effective diet to prevent cancer? "

add a comment of Nutrition and Cancer: Is There a Diet Against Cancer?