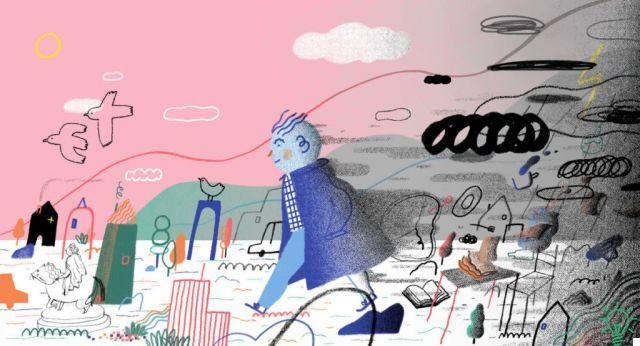 On many occasions we have cried without being fully aware that life was doing us a favor. There are situations that at a given moment have put us with our backs to the wall, generating deep sadness or anger and in some cases even making us question the meaning of life. However, later on, looking at them in perspective, we realized that those situations strengthened us, taught us a lesson, transforming us into better or at least more sensitive people. In short, not all evils come to harm.

In this regard, Albert Einstein used to say that if there was anything he was grateful for in life it was that he had met so many people who told him "no". Sigmund Freud said he was a lucky man because nothing was easy for him in life. All the great personalities of history shared a characteristic: they refused to be puppets in the hands of fate, they were aware that problems and setbacks are opportunities for growth.

In fact, Thomas A. Edison said, "I didn't fail, I only discovered 999 ways of not making a light bulb." For geniuses, every mistake, every negative event or "failure" becomes a kind of fuel that feeds their perseverance. That doesn't mean they don't suffer when things don't go their way, but they decide to turn that pain into an encouragement to move on.

The great personalities of history, as well as many anonymous people who have cultivated resilience, were aware of the fact that not all evils come to harm and that, even if at first they could not understand the meaning or the lesson it contained, the situation allowed them to grow.

Sometimes it's just a matter of changing your perspective

We tend to think that any loss, setback or disappointment is something negative that will harm us. This is because we focus on the negative side and are unable to analyze the situation from a broader perspective.


In this regard, when we find ourselves in such a situation we could think of the metaphor of the carpet. That is, each carpet has two sides, if we just look at the bottom side, the one in contact with the floor, we will only see a tangle of meaningless threads, we will not be able to find the meaning or see the design. The problem lies only in the fact that we are looking from the wrong point of view, a perspective that can lead us to draw wrong conclusions that would feed useless suffering. But if we are able to understand that we can turn the carpet and look at it in front of it, we will not only be able to discover its design, but it is also likely that we will be amazed by its beauty.

Our mind works in much the same way. In fact, we have a kind of fixation on seeking the meaning of things. When we fail to "fit" a situation into the history of our life, it is as if it remains suspended, blocked, transforming itself into a broken record that plays endlessly.

In this regard, a study conducted at Harvard University found how painful events are recorded in the brain. These psychologists made sure that some people who had suffered a trauma listen to the description of what happened. Meanwhile, their brains were undergoing magnetic resonance imaging. Thus it was seen that when people relived painful experiences, certain parts of the brain, such as the amygdala, the core of fear, and the visual cortex, were activated, but at the same time the area of ​​Broca, which is responsible for it, was deactivated. of language.

This means that when people experience trauma, they relive it as if it were a real situation, at least until they are able to give it meaning and integrate it into their life experiences. To do this, it is often sufficient to change the perspective, to look from another angle, if possible more constructive.

The fact that some situations can help us grow, become better and more resilient people, doesn't mean that they don't hurt or cause suffering. But it is important to distinguish between useful and useless suffering.

Useless suffering is what keeps us stuck, makes us prisoners, and doesn't allow us to flow with the natural course of life. This suffering has no therapeutic power, on the contrary, it feeds sadness, hatred and resentment.

Instead, useful suffering is what regenerates us, allowing us to free ourselves from anger, sadness and indignation. Useful suffering is like a river that flows naturally and eventually flows into a life lesson.

Helpful suffering allows us to take the adverse path and to arrive at our destination strengthened. This type of suffering breaks us down into a thousand pieces to re-assemble us again, giving us a more sensitive and at the same time stronger version of ourselves.

An example of this comes from a study conducted by a group of researchers from the University of California who showed that we can take advantage of adversity to grow and make drastic changes in our lives. These psychologists examined 209 women diagnosed with breast cancer and found that 60% of them felt that the changes they experienced during the course of the disease were positive and that they therefore learned to see life from a positive perspective and enjoy it more.

Of course, no one wants to get sick, suffer a loss or experience failure, but it is up to us to take advantage of the situation to learn and grow or, on the contrary, sink into a sea of ​​complaints that lead us nowhere.

In most cases it is difficult to see the opportunity for growth in difficulties. Therefore it is necessary to remain alert and to preserve the idea that not all evils come to harm. There are "necessary" evils that contain life lessons and it would be a real shame not to take advantage of them.

Therefore, remember that sometimes life is not telling you "no", but just "wait", sometimes the best opportunities present themselves disguised as problems, sometimes the difficulty represents a possibility to change path. So, the next time you make a mistake, suffer a loss, or have a setback, ask yourself what you can learn from the situation. This is a change of perspective that is certainly worthwhile.

add a comment of Not all ills come to harm