Vegetarian buffet menu for New Year's Eve. For a New Year in the name of eco-sustainability, the best thing to do would be to celebrate it with friends and above all without barrels! So for all those who have decided to celebrate the arrival of the new year in their own home, here are some quick and easy vegetarian recipe, to be prepared during the day, for one new Year's Eve dinner a buffet to spend having fun with your guests.

And to garnish the table just a few pomegranate grains, the protagonist fruit of the month, oranges and sticks of fragrant cinnamon!

Cosmopolitan with Pomegranate and Bruschettine with Radicchio Cream 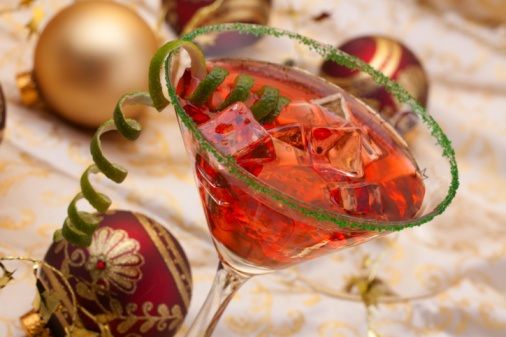 Prepare the cocktail shaking all the ingredients well

Clean the chicory, cut it into thin strips, wash it and dry it well.

Heat 2 tablespoons of oil in a pan, add the radicchio and cook over medium heat for 10 minutes. Remove from the pan, drain well and pass it in the mixer.
Put the radicchio puree in a bowl and add the mascarpone and the chopped walnut kernels.
Salt and pepper.
Toast the slices of bread in the oven at 180 ° for 10 minutes, transfer them to a plate, spread them with the prepared cream and decorate with walnuts and fresh radicchio.

Pizzas of Puff Pastry with Pumpkin and Spinach 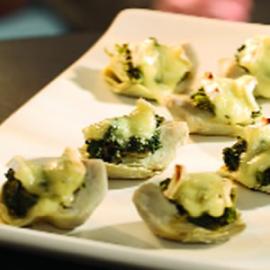 First, empty your beautiful orange pumpkin and wash the spinach.
Now cook the pumpkin in a large pan in which you have done a little finely chopped onion and a drizzle of oil, if necessary add a little water from time to time until the pumpkin is cooked.
Meanwhile, boil the spinach.
Once the pumpkin is ready and the spinach is cooked, put everything in a large enough bowl. Add a pinch of salt, a drizzle of oil, the ricotta, the parmesan and the sage. Mix everything very well.
At this point roll out the puff pastry and cut out some discs engraving the pasta with a glass or a cup depending on the size you want to obtain. Put the discs on a lightly greased baking sheet and with the help of a spoon put the pumpkin and spinach mixture into each disc. Bake everything at about 180 °, let it cook for about a quarter of an hour, until your pizzas are golden brown.
Then take them out of the oven and transfer them to a nice red serving dish. 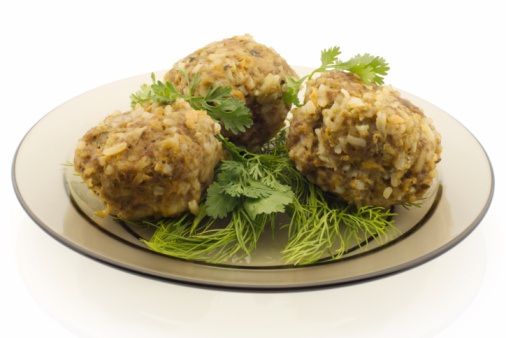 Peel the potatoes and the aubergines, cook them in steam or in boiling water, until they are boiled. Once cooked, mash the potatoes and aubergines together in the potato masher, you will need to obtain a puree. Now add the oil, Parmesan, a little breadcrumbs, salt, pepper and 2 eggs. Mix everything very well until everything is combined.
Now start preparing the meatballs: wet your hands slightly and work the mixture a little at a time, obtaining slightly flattened balls.

One at a time pass the meatballs obtained first in the remaining egg and then in the breadcrumbs and place them in the lightly greased baking tray.
Pour a little more oil over them and put them in the oven at 180 ° for about 20 minutes until they are golden.
Take them out of the oven and put them on a nice serving dish garnishing as desired, perhaps with a light sprinkling of chilli. 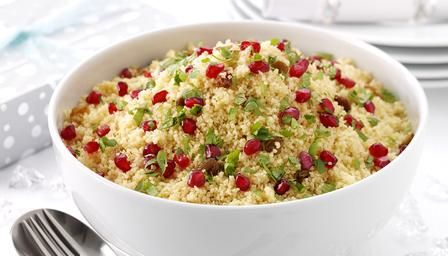 First, prepare the broth for the couscous by boiling the water in which you have poured the two cubes.
Meanwhile, put the couscous, raisins, spices and salt in a bowl. Mix everything very well. Add the boiling water and cover the bowl with a lid or cling film.


Let the mixture rest for 10-15 minutes, until the water has been completely absorbed by the couscous.
At this point, remove the film and in addition to mixing well, gently shell the beans with a fork.
Add the oil, stirring constantly, the pepper and the salt.
Pour the couscous into a fairly large serving dish. Cut the pomegranate in half and extract about a quarter of the seeds by hitting the outside of the fruit with a rolling pin, add them to the couscous and serve. 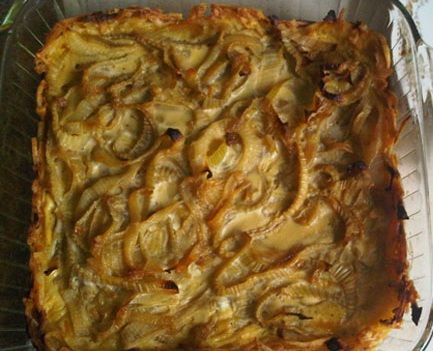 Clean the fennels and cook them in boiling water until they are boiled or, if you prefer, steamed to maintain their substance.
Break up the sandwich and soften it in slightly warm milk in a bowl.
In the mixer, add the fennel, the squeezed sandwich, the leftover milk, the pecorino, the oil and the salt. Blend everything until you get a homogeneous mixture. Beat the egg whites until stiff and add them to the fennel preparation. Add the breadcrumbs to bind the mixture. Put the flan in a well greased pan. Bake for 30 minutes at 200 °.
When cooked, transfer your fragrant fennel flan to a plate and cut it into slices.
Serve with a little raw oil and a sprinkle of cheese.

Raw Carrot and Celery Strips with Tomato and Mint Sauce 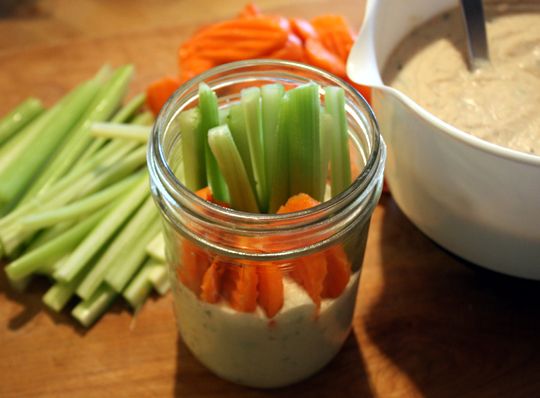 Peel the tomatoes by boiling them for a minute in boiling water and then letting them cool (without cooking them). Wash the mint leaves. Peel the lemon and remove the zest and cut it into pieces. Clean the garlic.
Now put the tomatoes, mint, lemon and garlic in the blender.
Add the white vinegar, olive oil and a pinch of coarse salt.
Blend everything together until you get a smooth sauce.

Add a little more vinegar or water depending on whether you prefer more or less thick, sprinkle with black pepper
Pour your sauce into a bowl
Now clean the carrots and celery and cut them into thin strips about 1 cm lengthwise and arrange them on a serving dish.
At this point, serve the dish with the raw vegetables and next to it the bowl with the sauce. 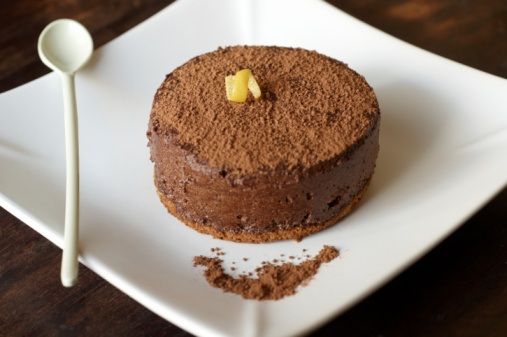 For the chocolate mousse

For the candied orange peel

First, start with the preparation of the chocolate mousse.
Bring a saucepan with a little water to a boil, then once boiled reduce the heat. Melt the chocolate in a heat-resistant ceramic dish in a bain-marie over the pot of water. Add the butter to the chocolate and mix until everything is melted and well blended. Remove from heat and let cool slightly.
Beat the egg yolks in a bowl together with the sugar until the mixture is quite thick and white. Add the melted butter and chocolate and pour in the coffee.
Now beat the egg whites until stiff with the help of a whisk and pour them very gently into the chocolate mixture.
You will have obtained a soft mousse that you will transfer into small cups or molds. Let them cool in the fridge for at least a couple of hours.
Now prepare the last of candied orange: first fill a small pot with water and bring to a boil adding the orange peel. Once cooked, remove it and drain it very well.
Fill the pot again with at least 150ml of water and bring it to a boil, this time adding the sugar and mix very well. Add the orange peel, reduce the heat and cook for 15-20 minutes, or until the liquid is similar to a syrup, stirring occasionally.
Now put the brown sugar in a shallow bowl. 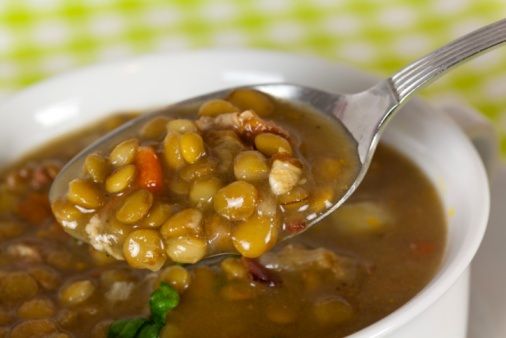 Wash the lentils (if they need to soak, try to keep them in water for at least 12 hours).
In a fairly large pot, fry the garlic, celery and carrot with a little oil, a pinch of salt and the chilli. Pour in the lentils and cover them with water. Add the bay leaf and cook everything for at least 40 minutes. Once cooked and all the water has evaporated, remove the bay leaves.
Meanwhile, cut the bread into cubes and fry it in a pan with a little oil.
Make it golden and crunchy. Drain the fried bread and let it dry on kitchen paper, then place it on the bottom of the plates and pour over the hot lentils.
Garnish with a drizzle of oil and a sprinkle of chilli.
For those who prefer, you could add a delicious and delicate lentil soup cotechino of seitan.
Enjoy your meal but above all Happy New Year.

Lentils: properties, benefits and how to choose them

10 veg recipes based on lentils