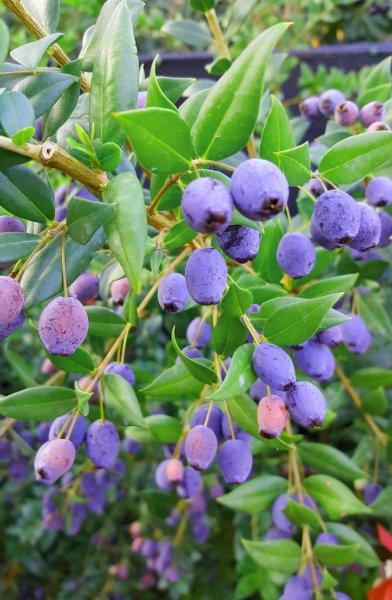 Properties and use of myrtle

Il myrtle (Myrtus communis L.) is a evergreen shrub of the Myrtaceae family. It is a species native to the Mediterranean areas, which has shiny and lanceolate leaves and pleasantly scented white flowers.

Le myrtle leaves they contain tannins and essential oil. The plant is traditionally used in the form of infusion, fluid extract or mother tincture for the treatment of hemorrhoids, leucorrhoea and lung diseases.

I fruits of myrtle they are dark berries and are used as a flavoring in cooking for the preparation of spirit, including the famous Sardinian myrtle. The essence is also used in the industry of aromas and perfumes and is used in aromatherapy for its balsamic and antiseptic action.

Properties and use of blueberry

Il blueberry it is a shrub present in different varieties, all belonging to the Ericaceae family: bilberry, cranberry and American blueberry.


Il Blackberry (Vaccinium myrtillus L.) is a small shrub widespread in all mountainous areas. In the country it is common in the Alps and the northern Apennines, where it grows above 1000 meters. It can also be cultivated, to use the leaves and fruits:

> the anthocyanins present in fruits they have a protective action on blood vessels, fight the action of free radicals, reduce edema and inhibit platelet aggregation;

> the extracts obtained from blueberry black they are also used to improve night vision and in retinopathies;


> the leaves instead they have hypoglycemic properties.

Il cranberry (Vaccinium vitis-idaea L.) produce berries which find use similar to those of the bilberry. The leaves instead they are used for their diuretic and disinfectant properties of the urinary tract.

Finally, the fruits of the American cranberry o cranberry (Vaccinium macrocarpon) are dark red berries rich in anthocyanosides and flavonoids and are used for the treatment of the urinary tract.

Thanks to his antiseptic action, the American cranberry is used in the prevention and treatment of cystitis.

The drug of the American cranberry is represented by fruits, which are taken in the form of concentrated and dried juice or extract.

The American cranberry is capable of inhibit the adhesion of bacteria to the bladder wall, thus carrying out an antiseptic action useful in the prevention and treatment of urinary infections.