Myotatic Reflex | What is that? What is it for? 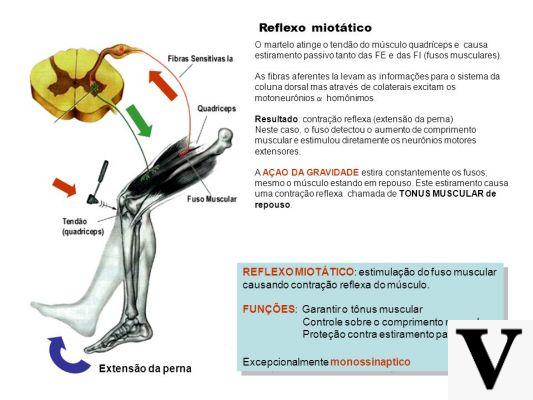 The Myotatic Reflex is also defined as a stretch reflex and is evoked by a lengthening of the muscle fibers to which a subsequent contraction responds. The immediate and most classic example available is the percussion of the patellar tendon with a hammer, which causing the stretching of the muscle leads to an involuntary, reflex contraction of the quadriceps femoris (method used for a first and quick evaluation of reflexes commonly performed by the your GP).

The myotatic reflex is defined as monosynaptic because the nerve fiber that sends the impulses connects inside the spinal cord with another neuron (synapse), exciting it and causing it to send a discharge to the same muscle from which the stimulus started, causing it the contraction.

The organelle that performs this delicate function, that is the receptor that sends the stimuli, is the neuromuscular spindle, a slow-adapting mechanoreceptor. Two things can already be understood from the name:

to. The first is that the receptor structure is spindle, elongated, and is placed in parallel with the exstrafusal striated muscle fibers (it measures about 1 mm and is about 0,1 mm thick),


b. The second is that it consists of a muscle component (intrafusal muscle fibers) and a nerve component (specialized stretch receptors and nerve endings).

To better understand the reflection, let's focus on the structure and function of the spindle; it is divided into central portion and polar portions, which have different roles and compositions. In the first we have the cellular portions of the fibers that contain the stretching receptors and which have a double composition, a core bag (dynamic receptors), which collect information on the degree of stretching and its speed, and those in the nucleus chain (receptors static) that collect information only on the degree of elongation and are double that of the bag.

The fibers through which the receptors send information to the spinal cord are Ia and IIa which respectively innervate the bag and chain receptors (which also receive some Ia fibers); there are 2 types of fibers because the information of the bag receptors needs a higher conduction speed, guaranteed by the Ia; these receptors are in fact involved in the real fast reflex activity (ie in the reflex as seen in the example of the hammer), while the other receptors, with a slower conduction, guarantee the maintenance of the postural tone.

The Ia fibers arrive directly at the motor neurons (ie the neurons that cause muscle contractions) which are excited and cause a reflex contraction of the muscle fibers (monosynaptic reflex: example of the hammer). Those IIa, on the other hand, first form a synapse with another neuron, an excitatory interneuron, and then on the -motoneuron as above (in this way the conduction is even slower: disinaptic reflex).


In the polar portion of the receptor we have the contractile elements of the intrafusal muscle fibers (i.e. a single muscle cell contains the receptor elements in the central portion and the contractile elements in the polar portion) which are innervated by small motor neurons? and everything has its why: in fact these small neurons, which receive information directly from the Spinal Cord and Cerebral Cortex, have the task of increasing the sensitivity of the receptor by exciting the intrafusal muscle fibers and causing further stretching of the bag and chain receptors. nucleus that discharge the impulses, thus ensuring constant control even during the phases of muscle contraction (co-activation of? -motoneurons and? -motoneurons) and increasing the perception of movement and position of the same muscle.

What is it for?

This last sentence makes us understand the role of the myotatic reflex and the neuromuscular spindle in increasing the perception of muscle structure (kinesthesia) and in maintaining tone. In fact, the receptors taken into consideration (bag and chain) are slow-adapting receptors, that is, it means that the discharge activity is continuous as the stimulus lasts.

By default, the receptors have a tonic discharge activity (minimum number of impulses even in the absence of the stretch) which increases when the muscle undergoes a stretch and which maintains an activity greater than the basal one until the muscle itself is brought back. to the starting position.

The response of the bag receptors is much more powerful and faster (greater phasic response), while the chain receptors answer yes with an increase, but more bland than the first; in this case, however, when the stimulus is lasting, the frequency remains high for a longer time (tonic response).


The higher the number of neuromuscular spindles inside the muscle belly, the greater the refinement of the movement as it is possible to have a painstaking control of the gesture. The daily usefulness of the mechanisms of the myotatic reflex can be found in walking as well as in other stereotyped activities (i.e. acquired and become automatic): the stretching of a muscle causes the activation of the myotatic reflex (as seen above) and more it inhibits the contraction of the antagonist muscles, allowing the movement of the limbs and the continuation of the gesture. In fact, the spindles increase their discharge even for stretching of the order of micrometers (i.e. 1/1000 of a millimeter !!).

The interesting thing is that the spindle discharges following a perturbation due to the application of a weight force and consequently to a stretching of the muscle. The tone of the antigravity muscles in standing position is an accentuated tone since the force of gravity stretches the extensors and in response to the stretching of the extensors, we have a contraction of the muscle.

There is another extremely important mechanism: the anticipatory feed-forward.

It is a control mechanism that actually occurs before the perturbation.

It occurs when there is an expected perturbation of the -motoneuronic discharge which anticipates the contraction. The example of the elevator is useful for understanding it: before the elevator starts to go up, the tone of the extensor muscles is increased due to the expectation of the change in the gravitational factor.

So we must not think of the Myotatic Reflex as a lifesaver that prevents us from excessive muscle stretching but as that fine mechanism that allows us, by regulating the elongation and responding with a contraction, the various gestures and actions we perform every moment.

Audio Video Myotatic Reflex | What is that? What is it for?
Myofascial Release | The Benefits of Foam Rolling and Body Rolling ❯

add a comment of Myotatic Reflex | What is that? What is it for?