Myelosuppression is a medical condition characterized by a reduced production of blood cells by the bone marrow.

Also known as myelosuppression or myelotoxicity, it is one of the most important side effects of chemotherapy treatments used for the treatment of tumors. Not all these drugs induce myelosuppression and the extent of the same depends - as well as on the type of drug - also on the doses, on the methods of administration, on the patient's health and on the number of previously administered administrations.

Parvovirus B19 targets red blood cell precursor cells, which it uses to replicate. Often asymptomatic, the infection can cause myelosuppression problems (especially anemia) in people with compromised bone marrow or immune function. 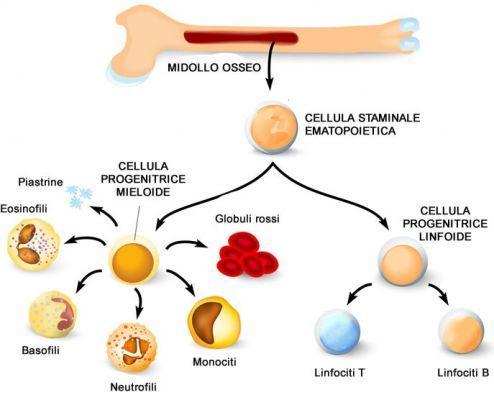 In individuals with myelosuppression, the bone marrow is unable to synthesize adequate amounts of blood cells.

The following table schematically shows the prevalent functions of blood cells and the consequences of their pathological reduction.


In general, the consequences of myelosuppression are all the more serious the more marked is the reduction of blood cells.

Of particular concern, in the oncological field, are the levels of white blood cells and especially of neutrophilic granulocytes; this is because their excessive decrease makes the patient susceptible to the development of a wide variety of potentially fatal infections.

Considering the dangers for the patient's survival, the use of drugs responsible for myelosuppression is contraindicated in case of:

It should also be borne in mind that:

Many chemotherapy drugs have negative effects on tissues characterized by a high rate of cell turnover, as occurs, for example, in the hair follicles, mucous membranes or blood.

Blood cells, in particular, are synthesized in the bone marrow in a defined process hematopoiesis. This process begins with progenitor stem cells, which possess the ability to differentiate into the different hematopoietic lines that give rise to white blood cells, red blood cells and platelets respectively.

Chemotherapy drugs create damage to these progenitor cells, while in general they do not create significant damage to mature blood cells.

In the case of severe myelosuppression, medical treatment is essential to try to restore normal blood cell levels. Among other things, the latter represent an important indicator for deciding when the patient can undergo a new course of immunosuppressive chemotherapy; this is because repeating the treatment when the blood values ​​are still too low represents a serious danger to the patient's life.

The treatments of myelosuppression are different, as are the related purposes:


Some of these treatments can also be carried out for preventive purposes.

The length of time it takes to reach the nadir (i.e. the lowest point of blood cell values ​​over time), as well as the median time to normalization of blood values ​​in the myelosuppressed patient, depend on the drug or drug combination and dosages. used. Generally speaking, it takes three to six weeks on average for a satisfactory recovery.

The onset of complications from myelosuppression, in addition to endangering the patient's life, compromises the effectiveness of the anticancer treatment; in fact, it can cause delays in subsequent cycles or a reduction in the dose of chemotherapy subsequently administered.