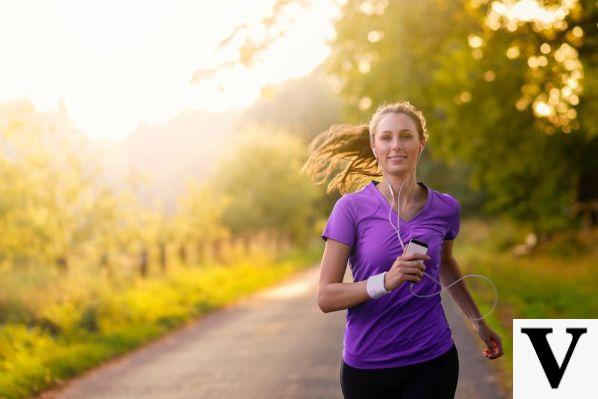 During physical activity, music is able to give us excellent sensations, it often increases concentration, at other times it relaxes us or motivates us, it can make us feel alive, almost invincible; yet in the last decade it has been banned from many sports, starting from marathons to other endurance disciplines, under penalty of exclusion.

The first time happened at the 2007 New York marathon when the organizers motivated the choice to ban music from the competition accusing it of distracting the athletes from the real goal of the race; while for the “USA Track and Field” the real motivation lay in the fact that the sensorially isolated athletes risked cutting off their “colleagues”; for other bodies the choice was due to the increase in the quality of the performance and therefore to an unbalanced competitive relationship between the runners who used music and not.

But what are the real effects of music on athletic performance described in scientific literature?

The first studies on the subject date back to the late 90s, they continued to evolve in the 2000s and interest increased particularly after the 2007 marathon.

Already in 1997 Karageorghis & Terry pointed out that in some moments of the competition, music has the ability to arouse a small but significant effect on performance, as well as being the ideal companion for training.


Scientific research subsequently developed has identified 5 key points in which music can influence performance (both in preparation and in competition): dissociation, synchronization, arousal control, acquisition of motor skills and achievement of competitive trance.

During the "submaximal" exercises, music can limit attention and in turn distract the mind from the sensations of fatigue.

This diversionary technique, which in psychopathology and psychiatry is called dissociation, lowers the perception of effort.

More precisely, an effective dissociation, which takes place by totally removing thoughts from the sensations of fatigue, can promote a positive state of mind by increasing the feelings of vigor and happiness and attenuating the negative ones of tension, depression and fear. (Bishop, Karageorghis. & Laizu 2007).

This is valid only for medium and low intensity efforts; at high intensity (or in anaerobic workouts) the perception of fatigue with its physiological mechanisms (for example the high respiratory rate and the accumulation of lactate in the blood) overcomes the impact of music. (T.Atan 2013)

In particular, some studies show that the effects of dissociation are found to decrease the perceived effort in a normal run at medium intensity by 10% (Karageorghis & Terry, 1999; Nethery, 2002; Szmedra & Bacharach, 1998).

In high-intensity work, even if the music does not reduce the perception of effort, it can improve it by assimilating the training to something more fun, modeling how the mind interprets the signals of fatigue.

For example, in a high-intensity run, music will not facilitate the work in terms of the signals that the muscles and organs send to the brain, but it will make it seem more pleasant.


The limitation in hard training is therefore that music cannot influence what the athlete feels, but how he feels. (T.Atan 2013)

Music alters psychological and emotional arousal and therefore can be used before training or competition as a stimulant or calming (e.g. for anxiety states) for the athlete (Bishop et al. 2007) by encouraging the achievement of optimal mental state.

Most athletes use sound to motivate and stimulate themselves, to mentally prepare for the effort; for others, music is a means of calming anxiety, such as Olympic champion Kelly Holmes who used Alicia Keys' soulful ballads at the 2004 Athens Olympics, or boxer Audley Harrison who used to listen to Japanese classical music before each meeting.

In particular, it is the rhythm that influences the psychological processes (it seems that a faster rhythm is associated with higher levels of arousal than a slower one) and the text together with other extra musical associations that affect the emotions. (Karageorghis and Lee 2001)

Research has shown how the synchronization of music in its rhythmic elements (beats and tempo) with repetitive movements over time, therefore for disciplines such as running, cycling, rowing or cross-country skiing, is associated with an improvement in the performance of the activity.

The musical rhythm can regulate the movement and thus prolong the performance; synchronizing movements with music allows the athlete to perform his activity more efficiently, again with a consequent improvement in endurance.

In a 2008 study, individuals who rode in time (in synchrony) with music were compared with others who, doing the same job, had only background music and / or background sounds (asynchrony), the latter needed 7% in more oxygen. (Bacon, Myers, & Karageorghis, 2008).

Famous is the case of the Ethiopian marathon runner Halle Gebrselassie who set the world record by running in time with the pop song "Scatman", selected because the rhythm of the music perfectly synchronized with the rhythm of his steps.

The effects of synchronization on running have been demonstrated in an experimental setting by Simpson and Karageorghis (2006) who noted how the speed in a 400m "sprint" is about 0,5 seconds higher in athletes who listened to synchronized music than a champion. control not conditioned by any music.

Music can have a very positive impact on the acquisition of motor skills. Particularly in children (or at least in the youngest) music accompanied by play or dance offers the opportunity to explore new ways of moving and to improve coordination.

Although no data is found in the more recent literature, some "old" research (Chen, 1985; Spilthoom, 1986) has shown that the controlled application of selected music can have positive effects on the "stylistic" movements of sport.

There are three plausible ways to explain how music increases the possibility of acquiring new and superior motor skills.

The first is that music is able to reproduce patterns of body rhythm and many other aspects of human movement, it can therefore transport the body through actual movement patterns, that is, it seems that the body follows forms similar to sounds.

A second explanation refers to the lyrics of the songs that can reinforce essential aspects of a sporting technique, for example by recalling a certain movement.

The third explanation is that music makes teaching more fun by increasing the individual's motivation to reach high levels in key skills.

5. Achievement of the competitive trance

Studies concerning the effects of music on the motivational state lead to think that music can help to reach the state of agonistic trance (flow in psychology, in English "flow" or "zone").

In fact, some research has shown that music can promote a trance state. In particular, Pates, Karageorghis, Fryer and Maynard (2003) in a study on the effects of “pre-task” music on netball players found improvements both on the perception of “flow” and on the performance of athletes.

The researchers concluded that the intervention of music (chosen by the athletes) and their imagery may have improved athletic performance by triggering emotions and cognitive processes related to the achievement of competitive trance.

Another study (Karageorghis and Deeth, 2002) examined the effects of “motivational music” during training by analyzing the stages of competitive trance through the factors indicated by the “Flow State Scale”.

Which Music to Listen to?

Having understood the benefits that music brings to the performance, all that remains is to understand how to choose the correct playlist to accompany our business.

An athlete who is looking for music to accompany his training or competition must begin by considering in what context he "operates" (Karageorghis, Priest, Terry, Chatzisarantis, & Lane, 2006) or what kind of activities he will perform, what are they the objectives of the session, how our activity can affect other athletes and those around us, with which devices it is possible to listen to music.

Some activities lend themselves very well to being accompanied by music, for example the more "repetitive" activities such as stretching, warm-up, weight training, circuits and others like that.

In any case, the athlete must choose, from a list of songs he already likes, those that have a tempo and a rhythm that are well associated with the type of activity.

To evaluate the effective motivational quality of a specific music, the “Brunel Music Rating Inventori” or its derivative BMRI-2 can be used.

For example, an athlete who wants to bring his heart rate to values ​​around 120 bpm during his warm-up should choose music with a time between 80 and 130 bpm, the tracks must occur in a gradual increase in the musical tempo accompanying the progressive. increased heart rate.

In well-structured workouts (for example circuits, or with precise intervals) it is also possible to "sew" the music listened to on the various components of the training so that, for example, the moment of exercise and recovery are characterized the first by fast music and at high volume and the second a slower and lower volume.

One study calculates a 20% improvement in performance in athletes who followed this type of approach for a week. Another study (Priest & Karageorghis, 2008) has found with some frequency the tendency of many athletes to coordinate with the moments of maximum effort some specific musical "segments" (the technique is called segmentation) of a track that they find particularly motivating. .

The technique works even better if the athlete knows the track very well and is able to anticipate the “flow” dictated by the music. It is also efficient to adjust the time according to the intensity of the effort made (Karageorghis, Jons and Low, 2006; Karageorghis, Jones and Stuart, 2008).

How to listen to music?

Another important choice is how to listen to music, or rather through which device. When you decide to accompany your training or competition with music, some aspects must be taken into account when choosing the device to use.

For example, if the sound can annoy someone nearby, it is necessary to listen to it through headphones or earphones, or if the goal of the music is to encourage group spirit or to motivate a group of athletes, it can be delivered with other portable and non-portable devices.

If distraction is an important factor, another aspect to be carefully adjusted is the volume which should be slightly high but without exaggerating, without causing discomfort or damage to the ear and / or hearing. In particular, it is recommended to keep an intensity below 75 dB to avoid significant damage. (Alessio & Hutchinson 1991).

In light of everything, in choosing our accompanying playlist, the researchers recommend assembling a wide selection of pleasant and familiar tracks that follow the following criteria: strength and energy of the rhythm, positive texts associated with the type of movement, rhythmic patterns well assimilable to patterns of the body rhythm of the activity in progress, uplifting melodies and harmonies, associations with sport, exercise, triumph or overcoming adversity and finally a style and a language that meet the tastes and socio-cultural background of the 'athlete.

Furthermore, another parameter to be taken into consideration is the variability of the selection, considered by some studies to be of primary importance. (Priest, Karageorghis and Sharp, 2004).

It therefore emerges that in reality there is no ideal compilation of music suitable for sport but on the contrary it is all very subjective and each athlete must choose their own playlist according to their tastes and their activity.

In conclusion, it was illustrated how music can influence both training and competition in different ways with quantifiable and significant effects, increasing the quantity and quality of the exercise.

Today many athletes accompany themselves in their activities with music often chosen without any criterion other than that of appreciation (albeit fundamental). The aim of this article is precisely to advise the average athlete and push him towards a reasoned and functional choice of his own sports playlist.