Multitasking: If You Know It You Avoid It. 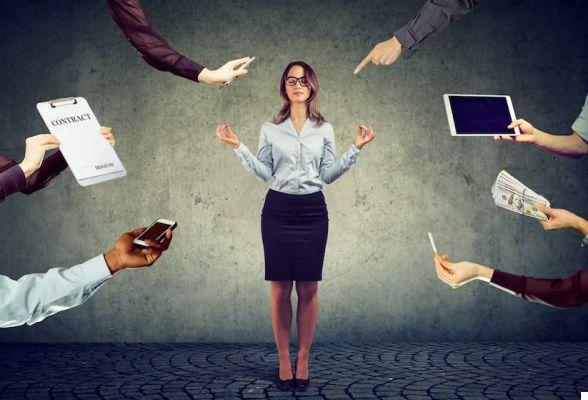 Among the many lies that are read about how to be more productive, one of the hardest to die is the one about multitasking

The reason is understandable: during our typical day, we are subject to so many different stimuli that the ability to deal with multiple things at the same time it really sounds like the ideal solution.

The truth, however, is that multitasking is not only useless, but also harmful.

The fact that, despite this, so many persist with pride in practicing it, depends partly on mere suggestion and partly on interesting biological evolutionary reasons that I will tell you.

In the meantime, however, let's start from the beginning ...

Did you know that the word “multitasking” was invented in the 60s by computer programmers?

It indicates the ability of a software to execute several programs at the same time, with a simultaneity that, however, is only apparent: in reality, in fact, the software continuously jumps from one program to another.

The same thing happens to our brains when we perform two tasks they occupy the same cognitive channels: his attention does not remain fixed on both tasks, but constantly hops between them.

We can therefore, for example, hum and run at the same time with adequate concentration on both activities: in fact, in this case, the cognitive channels used are different.

But when the cognitive channels are the same or almost the same, as happens for example for the pairs of actions talking / writing or driving / looking at the mobile phone, our concentration is forced to jump from one activity to another, so that both are adversely affected.


Not surprisingly, according to statistics, a quarter of car accidents are now due to the use of mobile phones in the car.

Yet, there are many who still persist in saying that there is no problem listening to a text message while driving.

It's probably because multitasking has also made them get a little dumber.

And I'm not kidding: as you will read shortly, this has been amply demonstrated by Professor Clifford Nass of Stanford University.

In the summer of 2009, fascinated by the alleged abilities of multitaskers - in those years multitasking was so fashionable that people even put it on their curriculum vitae - Professor Clifford Nass decided to delve deeper into their abilities.

Thus he divided a sample of students into two groups:

He then subjected them to a series of cognitive tests focusing primarily on accuracy and speed with which they were able to identify relevant information interspersed with various types of distractions.

The results he got were amazing.

The high multitaskers, in fact, contrary to what was expected, scored (on average) a lot lower to those of low multitaskers.

That is, they were not those phenomena that were expected, on the contrary, they were a little scarcer in everything.


This experiment was followed by many others which, in a few years, completely overturned what, until then, had been the common beliefs about multitasking.

In particular, it was shown that it:

Despite this, however, we persist in living trying to devote our attention and our energies to 10 things at the same time.

Because we love multitasking so much

According to Clifford Nass, our penchant for multitasking rests on the same reasons why we overdo harmful foods.

For hundreds of thousands of years we have evolved in a resource-scarce environment, and so we have learned to prefer foods that are high in calories, fat and sugar.

Likewise, we have developed a predisposition to pay attention to as much information as possible, particularly relating to other human beings, because vital to our survival.

Or, said, in other words, when on earth we were four cats and there were no cell phones / newspapers / TV / books / office colleagues / friends of the club etc etc, to be hyper-responsive compared to external inputs it was an advantage.

Today we are 7 billion and we are bombarded with information, this one hyper-reactivity it crowds our mind in an excessive way and makes it work badly.

Do one thing at a time

“Do one thing at a time” my mom and my elementary school teacher told me.

That's what I repeat every day to my 5-year-old son, and that's what I say to you today too.

Especially when you want to achieve results in a cognitively complex task, forget the illusion of multitasking and instead devote all your unconditional attention to one thing.

To do this, I recommend some rules that I have already talked about often in the blog, and which are intended to protect your time from the interference of others and your natural tendency to get distracted:

But, above all, it is necessary to implement a complete change of mentality, realizing the fact that, in a world (the Western one) characterized by the abundance of choices and resources, less is more.

Not only from the point of view of productivity, but also from the ethical and existential one.

In fact, when you get rid of all the noise around you and find yourself with fewer, but more important things, it becomes easy to find your true focus and achieve your true goals.

add a comment from Multitasking: If You Know It You Avoid It.