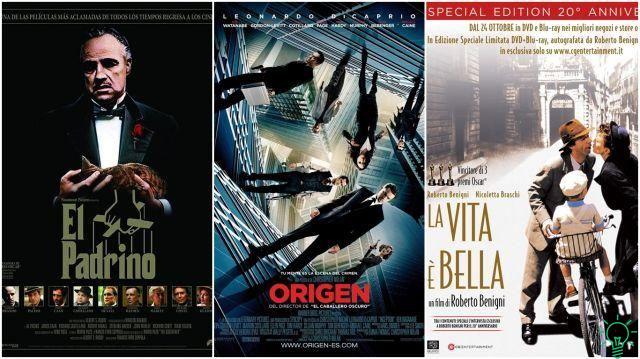 From "Into the Wild" to "The Imitation Game," some of Hollywood's greatest films are inspired by true events and personal stories of tragedy, resilience and success. Check out this list of movies based on true stories that immortalize moments, actions and memories of real people.

25 movies based on real events

Movies based on real events: shot before 2000

"I'd rather be here, a free man among my brothers, facing a long march and a hard fight, than be the richest citizen of Rome: fat from food he didn't work for and surrounded by slaves." You have just read one of the iconic and thought-provoking sentences in this masterful description of the most famous slave revolt in history. Directed by the great Stanley Kubrick, the film is hailed as one of the best films about the Roman Empire.

This film, based on true events, tells the story of the Welsh diplomat and soldier Thomas Edward Lawrence in the Arabian Peninsula during the First World War. It recounts the emotional battles of the officer mired in the violence of war, his identity and his loyalty, divided between his homeland (Britain) and his companions within the Arab desert tribes. A truly epic masterpiece.

Alcatraz, built on an island in San Francisco Bay, was the most secure prison of its time. Escape was thought to be impossible until three bold men (played by Clint Eastwood, Fred Ward and Jack Thibeau) attempted to escape in 1962. Their success is still up for debate, but this compelling narrative is a great summary of true events mixed with popular fantasies. .

Apocalypse Now is based on "Heart of Darkness" by Joseph Conrad (1899), which in turn is based on real events experienced by the author. In this revival of history, set during the Vietnam War, Captain Willard, played by Martin Sheen, is sent to Cambodia on a dangerous mission: to assassinate a renegade colonel (Marlon Brando) who has taken over as deity in charge of a local. tribe.

Midnight Express is the true story of Billy Hayes, an American college student who is caught smuggling drugs from Turkey and jailed. The film's title is the slang used in prison to indicate an inmate's escape attempt. Billy tries to escape several times, but the guards catch him and beat him badly. One of the most famous elements of the film is its soundtrack, which won the Oscar for Best Original Score in 1979.

New Orleans District Attorney Jim Garrison discovers that there are more facts to the Kennedy assassination than are told in the official story.

This film tells the story of Oskar Schindler (skillfully played by Liam Neeson), a Nazi businessman who decided to follow his conscience, managing to save more than 1.000 Jews from the Holocaust. The film is directed by Steven Spielberg and stars Ralph Fiennes as the top Nazi executioner, the infamous Commander Amon Goeth. The film was very well received by critics and audiences alike, winning the Academy Award for Best Director and Best Picture.

An old man embarks on a long journey aboard his lawnmower to reunite with his sick brother. It is based on a true story: Alvin Straight, an Iowa farmer, in 1994, at the ripe old age of 73, drove 240 miles (386 km) on his riding lawn tractor to visit his brother who had suffered a stroke. heart attack. . He was traveling at 8km/h and it took about 6 weeks.

This film, which tells the story of mathematical prodigy John Forbes Nash Jr, is proof that there is a fine line between genius and insanity. Viewers get an up-close look at the life of this incredibly gifted, but equally insane individual, played by Russell Crowe. Nash suffered from schizophrenia, which greatly affected his personal life, relationships with family, friends, and his work.

This film, which earned Julia Roberts an Oscar for the role of leading actress, follows the life of Erin Brockovich, a small-town lawyer and mother of three. Brockovich, without proper education, is hired as a lawyer and accidentally comes across a serious case of water intoxication, causing a huge increase in cancer cases in her hometown. She will have to fight hard against big companies. An engaging and interesting story.

Biography of the famous artist Frida Kahlo, who channeled in her works the pain of an incapacitating pathology and the storm of a difficult marriage.

Leonardo DiCaprio and Tom Hanks star in this feature film based on the life of Frank Abagnale Jr. The young Abagnale became an expert in counterfeiting and managed to cash millions of dollars in checks, posing as a pilot, doctor and lawyer during his criminal life. path. What's more impressive is that he did it all before his XNUMXth birthday and the only reason he started was to get his parents back together, who had been in dire financial straits and broke up. The film combines comedic scenes with excellent action and acting. Maybe DiCaprio deserved to win the Oscar?

The Pianist, directed by Roman Polanski and starring Adrien Brody, is a film about the true story of Polish Jewish musician Wladyslaw Szpilman, who fought to survive the destruction of the Warsaw ghetto during World War II. This critically acclaimed film won three Oscars, a Palme d'Or, and many other major awards.

This film tells the true story of the Spartan king Leonidas and his 300 men who fought against the Persians in the Battle of Thermopylae, between Greece and Persia (present-day Iran) in 480 BC With Gerard Butler as king and Lena Headey (AKA Cersei Game of Thrones' Lannister) as his queen, the film combines stunning visuals with skillful acting, bringing history to life.

A film based on the true story of a boy's spiritual journey through nature. “Into the Wild” reflects on the conflicts and problems that afflict those who live a materialistic life. The protagonist is imbued with the desire to be free and independent, to escape the norms of society and transcend nature. After graduating from college, model student and consummate athlete Christopher McCandless disposes of all his possessions, gives the contents of his bank account to charity, and hitchhikes to Alaska to pursue his dream. Alexander Supertramp: a legend was born.

Movies based on true stories: the most recent

Chris Terrio adapted the screenplay for the film based on intelligence agent Tony Mendez's book, "The Master of Disguise," and Joshuah Bearman's 2007 article, "The Great Escape: How the CIA Used a Fake Sci - Fi Flick to Rescue Americans from Tehran". . The film narrates the joint operation between the United States and Canada, called "Canadian Caper", in which Méndez led the rescue of six American diplomats from Tehran, during the hostage crisis in Iran (1979-1981), using images of a science fiction film. .

This dramatic adaptation of Clint Eastwood is a brutal tale of Navy SEAL sniper Chris Kyle, whose precision saved countless lives (and took just as many) during the Iraq War, making him a legend. However, when he was finally released and returned home, Kyle struggled to escape the ever-present shadow of war and death, and struggled to reconnect with his family.

Starring the brilliant Benedict Cumberbatch (aka Sherlock), this gripping film tells the story of mathematical scientist Alan Turing, who attempted to crack the Enigma code the Nazis used to encrypt their radio messages during World War II. Turing was a genius but it was very difficult to work with him, as he considered his colleagues intellectually inferior. To succeed in his enterprise, Turin had to overcome both mathematical and social difficulties.

This biographical drama documents the life of Solomon Northup, a free black man from upstate New York who is kidnapped and sold into slavery in 1841. "12 Years a Slave" won the Oscar for Best Picture and was revered by audiences and criticism. Not only was it brilliantly directed by Steve McQueen, but the film was moving and realistic.

The Bling Ring is a film written, directed and produced by Sofia Coppola. The cast of the film is important and among the protagonists there is also Emma Watson. It is based on the 2010 Vanity Fair article titled "Suspects Were Wearing Louboutins" by Nancy Jo Sales, which featured a real gang of thieves known as The Bling Ring. The story follows a group of teenagers obsessed with fame and luxury, who use the Internet to track down the whereabouts of celebrities and break into their homes.

“The Danish Girl” is a romantic drama film directed by Tom Hooper, based on the 2000 novel of the same name by David Ebershoff, loosely based on the lives of Danish artists Lili Elbe and Gerda Wegener. Lili and Gerda's marriage and work evolve as Lili continues her innovative journey as a transgender pioneer.

After becoming a quadriplegic due to a paragliding accident, an aristocrat hires a young black man to be his caretaker. The film ends with the images of the protagonists of the true story on which the film was based.

The true story of how the Boston Globe uncovered the massive child sex abuse scandal and cover-up within the local Catholic archdiocese, which shook the entire Catholic Church from within.

In 2006-2007, a group of investors bet against the US mortgage market. During his investigation, it emerges how dirty and corrupt the financial market is.

Held captive for 7 years in a closed space, a woman and her young son finally gain their freedom, allowing the boy to experience the outside world for the first time.

The film is a film adaptation of the novel “Room”, written by Emma Donoghue, which is inspired by a true story: the Fritzl case, a criminal episode in the Austrian city of Amstetten.

You can find them in our other rankings:

The best movies of all time according to avid inspiring fans: part one

Why are you obsessed with the past and 4 ways to leave it? ❯

add a comment of Movies based on true stories: the 25 must-sees