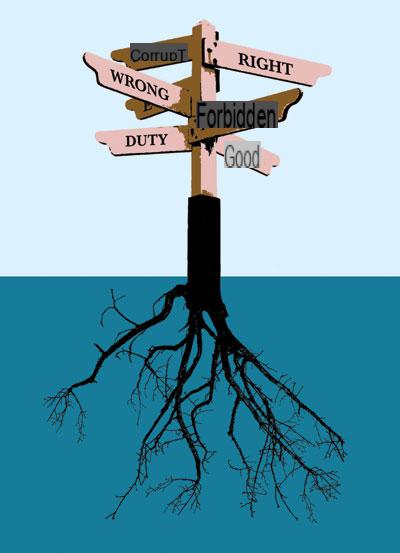 There are many proofs
which offer us the various scientific studies in the area of ​​psychology that we
they confirm that we do not always act or decide in a completely conscious way.
Lately Travis Proulx and Steven Heine, researchers at British Columbia University, have
developed a very peculiar study with which they demonstrate how they can vary
la moral flexibility of a
person and his aggressive attitude with respect to the explicit threat level
or implied that this experiences.

To prove
this involved 81 students who had to fill out a
questionnaire in which they expressed their preferences regarding entertainment
and free time. But for a subset of students, the researchers have
organized a joke: while the experimenter tried to take the
second part of the questionnaire by a cupboard was replaced, without it
students realized it, by another girl dressed in the same way. As well as
the researchers assumed, only five participants realized
joke while the rest fell victim to blindness
to change. Change blindness is a second perceptual phenomenon
which people don't notice that something has changed within a
context, even when the change is relevant. Why have
place this phenomenon it is enough that the scene undergoes a transition
temporal (just blink or move your eyes). It all depends on the
the fact that we observe the context with an all-encompassing gaze and with one
widespread attention, and if the scenes change in some details (as for
example in the girl's face), our memory is unable to
record the before and after so that we will not be aware of the
differences. But back to the essence
of the study, the researchers used another subgroup to which
participants were asked to answer questions related to their own death,
thus increasing the feeling of vulnerability and mortality of each of them. To a third
subgroup (chosen as the control group), was only asked to
complete a leisure time questionnaire. Finally, everyone
a story about the arrest of a prostitute was told and he came
asked them to judge her and determine what sum this would have to pay
as a deposit (between 0 and 1000 dollars). Curiously i
results showed that both the participants subjected to the phenomenon of
change blindness as those who underwent the priming of death, were more severe and increased
significantly the amount of the deposit. On the contrary, those who do
they limited to answering questions related to free time showed themselves more
condescending. The authors of the
study suggest that the activation of personal, evoked threat patterns
either consciously (with questions about death) or unconscious (with the
replacement of the experimenter) help to create an attitude
defensive that ends by affecting our judgments. Following the logic
of experimenters, many small changes occurring in our environment,
which we do not realize on a conscious level, could trigger in
us a defensive attitude, making us less flexible and more people
criticisms in our judgments. In short: when we are afraid of ours
moral flexibility varies and we become more severe judges.
I personally don't accept this idea, but if so, at least know how
we work allows us to be more aware of our prejudices, and
this is a step forward that will help us eliminate them.
Love phrases: the right words to enlarge (and share) your heart ❯