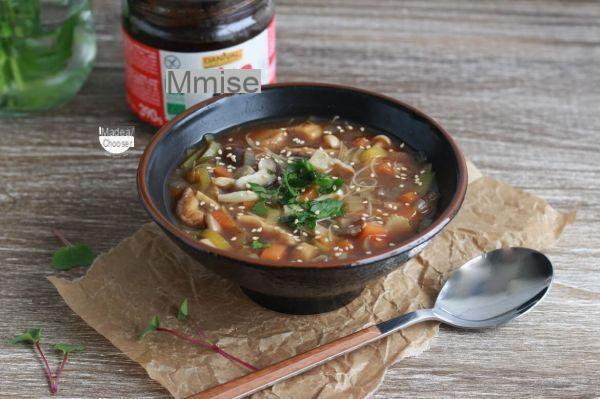 In short, miso is one fermented pasta which can be obtained from a base of various cereals and legumes, such as soy, rice, barley, millet and others.

It is a special condiment and flavoring, also called "superfood" which serves to enhance the flavor of oriental, Japanese and Chinese dishes.

Now also known in the West, where it is difficult to find it completely natural and not of industrial production, it is mainly used for prepare Japanese miso soup, but can also be used for many other recipes.

If you truly loveself, you have patience in the kitchen and want to feed yourself naturally, here's how to do it the basic recipe for miso, an experience that some purists define as "mystical".

Those who engage in this must absolutely know the traditions of Japan and learn the use of Aspergillus oryzae, a stringy, probiotic fungus-fermenter that starters organic grains such as soy and rice, and which is the basis of the "birth" of miso.

How to make miso: the recipe

From an interesting blog about Japan and thanks to the Tempodivivere and Kenshosake sites, we discover and rework the basic recipe for miso, which is not too easy to do. Indeed, before making miso, koji must be produced, or fermented rice. By letting you read the production of koji from the site indicated and imagining that you have the koji already made - you can also buy it in organic, natural and specialized stores or online - here's how to proceed to make miso.

Boil the soy beans in plenty of water for about an hour (if you use the pressure cooker the times are halved). Once cooked, drain the faglioli and puree them with an immersion blender.

Then mix the soy with the koji and add the salt. Leave this pasta in a basin - it would take the traditional barrel - for a period ranging from two to six months, up to more than a year, to ensure that it ferments and seasons before using it.

Among the basic cereals for the production of miso they can also be used: rice, buckwheat, barley, millet, hemp seeds, rye, wheat or chickpeas. Some producers have also started making miso starting from chickpeas, corn, azuki beans and even quinoa.


Miso in the oriental tradition

According to oriental medicine, For the richness of nutrients which contains (proteins, enzymes, amino acids, B vitamins) miso is to be considered a product that ensures longevity and well-being to the person.

According to macrobiotics, miso consumed before meals promotes digestion and assimilation of all nutrients and is a alkaline food, rich in active enzymes that are beneficial for the stomach and intestines, which alkalize the blood, freeing the mind and improving the bacterial flora.

Useful reading
> “The art of fermentation”  di Sandor Katz ;
> "The new macrobiotic cuisine" by Michio Kushi; "
> "Miso soup and recipes with miso: how to use miso, a Japanese fermented food, in everyday cooking" by Kanako Okuda, Kanako Kubo