The military press, also called overhead press or slow forward, is an excellent exercise for the shoulders, but not only: the deltoids are stimulated along the entire range of motion, but also the trapezius, scapula lifts and rhomboids, the triceps and the bundles. clavicles of the pectoralis major.

Get into a standing position with your back in the position of strength and your knees slightly bent. Feet should be shoulder-width apart or slightly higher.

At this point, make sure that the barbell rests on the collarbones or in any case on the upper part of the sternum, with the hands positioned at a variable distance, but always higher than that of the shoulders.

1. Common mistakes in the execution of the military press

A common mistake, which is very often made during the execution of the military press, is to perform a partial movement: the athlete stops when the arms are parallel to the ground.

By doing this, the range of motion is reduced and the part where the deltoid works the most is avoided, in fact, in the last degrees of the movement, trapezius and shoulder blade elevators steal work from the deltoids.

The correct movement requires that the elbows are brought lower, almost towards the hips, whether you are looking for hypertrophy or performance.

Another mistake in the execution of the military press is to start with the elbows forward and not below the bar, which means not having a good angle of thrust in the starting position. Keeping the correct position of the arms when the barbell is in the chest is essential to perform a good overhead press.

Even starting the movement with the push of the legs, if we want to perform a military press and not a push press, is a mistake: the push allows you to avoid the sticking point (when the barbell is approximately at eye level), which is the highest point. difficult to lift, but it is precisely against this that you have to fight to improve in the exercise.

Another mistake you see being made is to transform the military press into a sort of standing incline bench. The more you lean back, the more you will use your chest instead of your shoulders and the spine will be subjected to unhealthy tension.

Starting from these fixed points, the military press lends itself to different variations.

The slow back (behind the neck barbell shoulder press) is the variation in which you start with the barbell resting on the upper part of the trapezius, and then extend the arms upwards. It is not suitable for all subjects as it requires ample joint mobility of the arm in external rotation, which is why it has fallen into disuse in recent years. 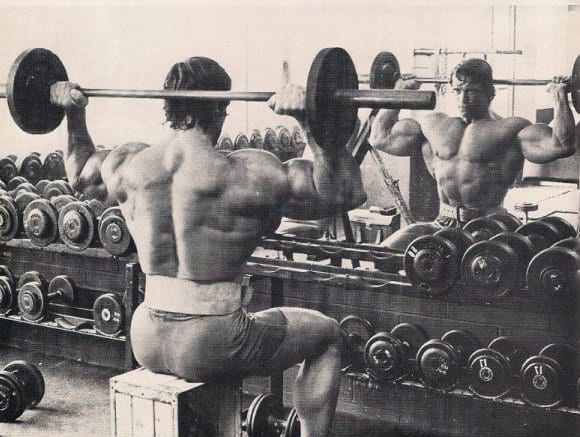 The slow with dumbbell (dumbbell shoulder press), is the response to the slow forward with independent arms, involves more the stabilizing muscles and is less burdensome at the joint level thanks to the more physiological trajectory. It also seems that this version stimulates the lateral and anterior heads of the deltoid in equal measure, unlike the version with a barbell in which the lateral head is stimulated more. 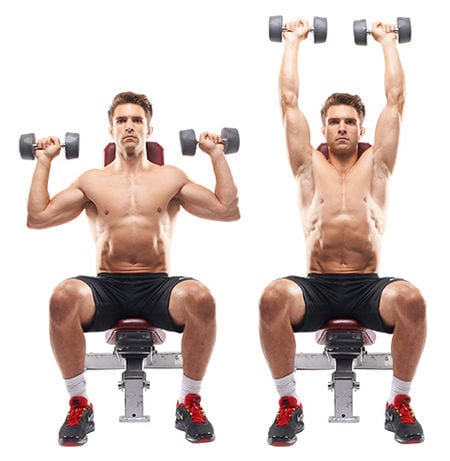 The Arnold press is a variation of the dumbbell slow introduced by Arnold Schwarzenegger. You start seated, with the dumbbells held on your back, at shoulder height, push upwards by rotating your wrists so that at the end of the movement your palms are facing forward. 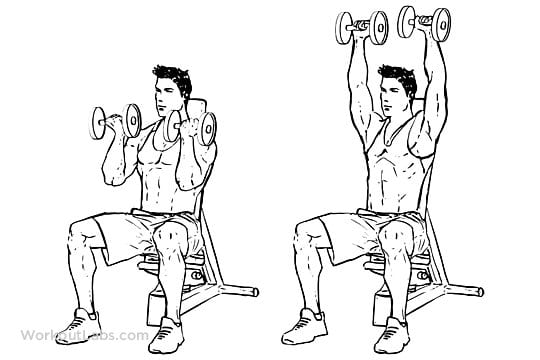 The push press is the variant of the military press in which the thrust of the legs is exploited in the concentric phase of the movement, lifting the load explosively. In the eccentric phase, the load is lowered in a controlled manner to the starting position on the collarbones, but without mobilizing the lower limbs. Thanks to the push of the legs it allows to lift loads higher than those used in the military press. 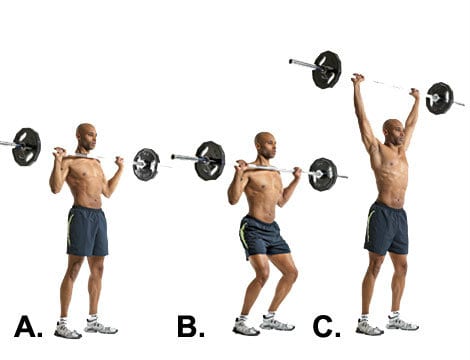 The military press and its variants are excellent exercises to build strength and mass in the upper body, in order not to incur injuries it is necessary to take care of the execution of the movement: the back must always remain in its position of strength and the knees, in starting, they must not be fully extended, for the grip also use the thumb and keep the wrists straight.

Also avoid the common mistakes we saw earlier that could limit the results.