McDonald's launches the 100% vegan BigMac: here's where (and what's inside) 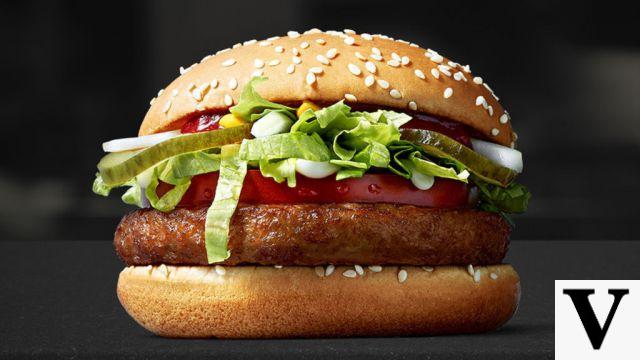 The BigMac will also have a vegan version. This was announced by Mc Donald's himself, confident (perhaps) of breaking through the hearts of those who do not consume meat-based foods. Here's where it will be sold and what the new Mc veggie burger is made of.

After the vegan McNuggets sold in Norway, now one of the flagship products of the most famous fast food chain in the world has decided to launch a panino veg.

It is the Germany in which from 29th April the vegetable BigMac will be on sale. Renamed Big Vegan, will be free of original animal ingredients and will be included in standard fast food menus. For this it can be combined, like all the others, with fries or salad as a side dish.

It will certainly be vegan, perhaps a little less healthy. Yet Mc Donald's claims that the product could satisfy even the most demanding palates. The Big Vegan in fact was born within the campaign "Believe it or not," in which the company is working to try to provide quality products:

"After all, in the social debate on animal welfare and sustainability, the demand for plant protein sources is stronger," said Philip Wachholz, company spokesman for McDonald Germany. “Although the percentage of vegans in Germany is still relatively low, with Big Vegan we are specifically targeting the far-reaching trend of the occasional forgoing animal products. This gives us more choice and we are convinced that our new vegan burger will meet the taste of all McDonald's lovers. "


What's inside the vegan BigMac

Good question. TO reply it is Mc Donald's that on its website lists the ingredients at the base of the new vegan burgers. They are in fact based on soy and wheat, with the addition of red beetroot, peppers and carrots, all seasoned with garlic and a vinaigrette.

Finally, the burger is served in one of the classics sandwiches with sesame and garnished with salad, tomato, cucumber and red onions. Ketchup and mustard sauce complete the mix.


Cooked separately from other burgers to prevent it from coming into contact with animal fats, Big Vegan will be available in all German restaurants from 29 April. In those with a limited range of products, it is offered in a smaller version than the classic but both variants will replace the Veggieburger.

The cost? It should be slightly cheaper than the BigMac at € 3,70.

In our opinion, it is unlikely that Big Vegans will be able to convince those who, by ethical and health choice, avoid the consumption of junk food.

add a comment of McDonald's launches the 100% vegan BigMac: here's where (and what's inside)