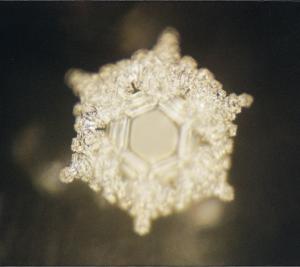 With each passing day, the physical (especially the quantum physics) penetrates more and more psychology, giving rise to a tormenting and uncertain but still seductive relationship. In this context, much discussed in the scientific community, the researches of Masaru Emoto relating to water.

It must be said that Emoto is a doctor who deals with alternative medicine and who has conducted studies on the relationship between water and emotions in the General Research Institute of Tokyo. Masaru Emoto proposes a very simple idea: our emotions and our thoughts would have a certain type of impact on the water, giving it a certain organization that varies depending on the negativity or positivism of thoughts. To reach these conclusions, Emoto exposed the water to different words, images and music, and after it froze he observed the ice crystals that formed. Of course, we know that each water crystal is different from the other but Emoto has managed to find some correlations between emotions, words, music and the shapes of the crystals. Through his studies conducted around the world, Emoto has for example found that when distilled water is exposed to rock music, most of the crystals break or acquire non-symmetrical, chaotic and fragmented shapes. But the same "rock effect" is found if the water is exposed to people who have negative thoughts or very strong negative emotions such as anger. But the curiosities do not end there, when the water was treated with aromatic floral oils, the crystals showed a tendency to imitate the shape of the original flower. Furthermore, Emoto also experimented with the tenses of sentences, subjecting the water crystals to words such as: “let's do it” and “do it”; observing that the word "let's do it" formed symmetrical crystals while the word "phallus" did not give rise to the formation of any crystal. At this point, Emoto states that our negative emotions and thoughts would not only cause damage to ourselves but could also have an impact on the world around us, even if these changes would not be perceptible to the human eye. As you can imagine, this theory has various detractors, many of whom point out that its research would lack control groups with which to compare the crystallization of water. The debate is still open since in 2006 Emoto carried out a study together with Dean Radin, having a considerable success from a methodological point of view. The sample of volunteers involved about 2000 people, Japanese and Californians. A second study, however, carried out in 2008 with 1900 participants did not obtain the desired results. However, the idea itself is interesting, or at least curious. I imagine it will be necessary to carry out more tests before accepting or definitively discarding these theories.
Autobiographical memory: how is it organized? ❯

add a comment of Masaru Emoto: relationship between water and emotions