Mamey sapote: origins, benefits and how to eat it

Pouteria sapota, o mamey sapote, is a native fruit of Central America and the Caribbean, and is today cultivated throughout Latin America, in the United States, in Australia.

Like all sapote (term deriving from the Nahuatl language, "tzapotl": sweet fruit) is an evergreen capable of reaching majestic dimensions when it finds suitable conditions.

La berry varies in size and shape depending on the variety: it ranges from 8 to over 20 centimeters in length, the skin is always earthy brown (it can recall kiwi), and the pulp changes from salmon pink to deep red.

When not ripe it is quite hard and full of latex which makes it chewy and practically inedible; when fully ripe it softens, the consistency is soft and creamy even if it contains a kind of granules that gives it a rather sandy feel.

The taste is always sweet, for non-lovers too sweet, so much so as to recall pumpkin compote or sweet potato, or even eucalyptus honey, with final hints of almond and chocolate. Although it resembles the other sapotes (Sapotaceae) it is easily distinguishable for its size and taste.

How do you eat mamey sapote?

Find it in the country it is an absolute rarity but going on vacation to the Caribbean, South America or Florida, we must not miss the opportunity to try it.

How do you eat? As mentioned, once it is established that the fruit is ripe, it is enough to cut it in two, remove the black and shiny seeds, and eat it with a teaspoon.

Obviously, it also lends itself very well to smoothies, ice creams and milkshakes… Very popular is the mamey sapote milkshake with milk and cream cheese. Not infrequently it is also found in the form of jam. 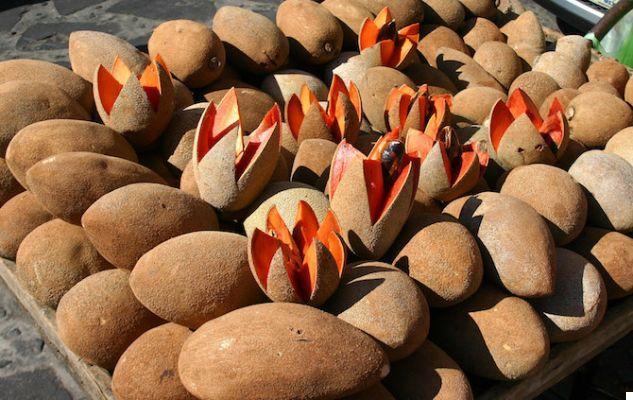 On a nutritional level it is to be reported as one of the fruits with higher percentage di vitamin B6 or pyridoxine, in a highly digestible form, important for the assimilation processes of amino acids; it is also rich in Vitamin B3, Vitamin B2, Vitmina C and Vitamin E.

The high level of vitamin B6, which we have mentioned above, optimizes the production of hemoglobin and therefore is of great help in case of anemia, in particular by decreasing symptoms such as fatigue, exhaustion, lack of energy and the presence of chronic pain.

In addition to serving as a excellent natural vitamin supplement, the fruit contains potassium and manganese, dietary fiber and various elements related to carotenoids.

Precisely the non-soluble dietary fiber of the mamey sapote, composed of excellent carbohydrates, from a particular sense of prolonged satiety and makes it a fruit ideal for weight control.

The part of fsoluble food ibrainstead has a excellent effect on the cardiovascular system, clearing the vessels of negative cholesterol, thus reducing the risk of heart problems, thanks also to Vitamin C which keeps the level of venous elasticity high. Also there Vitamin E, present in good quantity in the fruit, has a similar effect, as it contributes to remove plaques in the arteries decreasing the risk of heart attack.


Vitamin E is also helpful for women, as one of the best natural treatments for balancing hormones, great for problems related to the menstrual cycle and menopause.

Convinced that calcium intake is essential for bone health, many have begun a gold hunt for this trace element, without knowing that the most important trace element to take for this purpose is potassium. The high level of potassium in foods of plant origin is in fact, research data in hand, the best method to maintain the health of the skeleton.

What about niacin or vitamin B3 instead? It is considered the number one enemy of Alzheimer's and in general a good assumption of it is correlated to a lowering of risks of degeneration of brain capacities; it is no coincidence that the ancient Aztecs used mamey sapote for fight epilepsy.

Also discover the uses of Manilkara zapota, whose fruits are considered super food

Audio Video Mamey sapote: origins, benefits and how to eat it
Top vegetable of June, the courgettes ❯

add a comment of Mamey sapote: origins, benefits and how to eat it