Making money with the mind: how to attract wealth 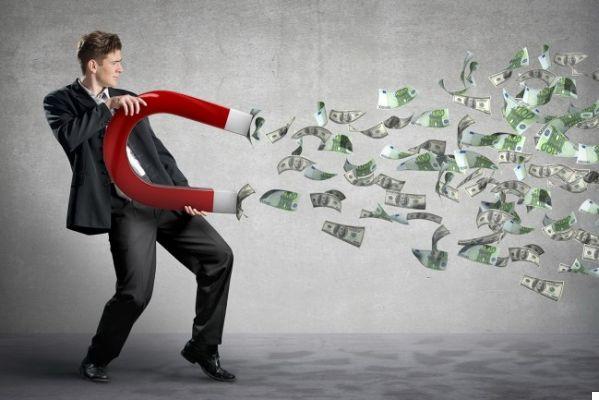 Making money with your mind it does not mean that one can enrich oneself simply by using the mind; rather it means that the financial success - as well as any other achievement in life - it starts with the mind. All human achievements - from the most irrelevant to the most extraordinary - begin with an idea, an intention, a thought or a project; while the action always comes later.

If you want make money with your mind, you must first decide how much money you intend to earn. Second, you have to cConfirm that it is really possible to earn the money you want and that you deserve it. Then you have to focus on you on it thinking about it and visualizing it as if it were already in your possession. And finally, you obviously have to be willing to pay the price to get it, in terms of concrete actions to be carried out, sacrifices to bear, perseverance e time to invest.

Ma most people don't have such a mental approach to money and it is not surprising that he does not get rich (in another article I have already suggested what it is the right attitude towards money). Many have some limiting beliefs about money and they feel - consciously or unconsciously - that they do not deserve great gains. They believe that life has to be a tiring struggle of sweat and tears, and that it is perfectly normal to work hard and never succeed. In short, they have a mental program that focuses on economic hardship and not on wealth. This means leaving already defeated. It's clear that having the right mental attitude is not enough to get rich: need Act e action requires sacrifice. But the sacrifice - preparatory to financial success - in the mentality of the winners it becomes the means to reach a better existence and not the end of existence itself. The problem is when one is convinced that sacrifice must be the reason for living: thinking in this way one inevitably condemns oneself to a hard, wretched and austere life.

If you believe you are beaten, you will be.
If you think you don't know how to dare, you won't dare.
If you want to win but think you can't,
It is almost certain that you will fail.
If you imagine losing, you've already lost,
Because in the world it is true that
Success begins with the will of the individual,
It's in his mind.
If you believe you are being outclassed, you will be.
To rise you must aim high,
you have to be sure of yourself first
To be able to win a prize.
Human battles don't always smile
Who is stronger or faster.
Sooner or later who will win
He will be the person who believes he can win.

da Think and Enrich Yourself
on Napoleon Hill

Making Money With Your Mind: First identify your limiting beliefs about money

make money with your mind devi clear your thoughts of all limiting beliefs about money. We often mature one negative predisposition towards wealth from childhood. It is likely that as a child or adolescent you have already heard that:

these messages are very dangerous and devious since, by acting on the unconscious part of the mind, can undermine and sabotage the odds of financial success. One may intentionally desire wealth, but if one unconsciously despises it or judges it negatively, it will hardly be achieved. In fact, it is necessary that the conscious and unconscious beliefs are aligned so that we predispose ourselves in a positive and empowering way to achieve their goals.

Of course, we all know that there are rich people who are very greedy, who neglect their families or who have an unruly and vice-filled lifestyle. But believing that money is to blame is wrong: money only emphasizes what one already is. If a person is greedy, workaholic, or addicted to drugs, the money will help him to be who he has chosen to be. Conversely, if a person has a generous soul, becoming rich is likely to do good and will donate part of his possessions to those most in need.

More limiting beliefs about money that could preclude yourself from enjoying wealth that you deserve or want are the following:

How to change limiting beliefs about money

make money with your mind devi change limiting beliefs about money using a technique as simple as it is powerful. Through the technique that I propose to you you will replace negative beliefs with positive and empowering beliefs, able to mentally predispose yourself to wealth. Follow i three steps subsequent:

Use the power of letting go to safeguard your millionaire mindset

When you do the exercise described above, it is likely that, in addition to the positive affirmations about money, “competing” thoughts or objections arise in you such as: do not make fun of yourself, you will never be rich; come on, you know that to make money you have to have money. When this occurs first put the objection in writing. Then close your eyes and don't be afraid to think about that negative emotion. If you try to forcibly eliminate it or ignore it, it won't disappear. After you have experienced the negative feeling, let go of the thought and the emotions that accompany it. Imagine that the piece of paper on which you wrote the objection is swept away by a river that flows rapidly and dissolves forever in the water or that it is burned and disappears as it becomes ashes.

Making money with your mind by visualizing wealth and well-being

In unconscious part of your mind can plant any idea by reiteration of thoughts imbued with positive expectation and the emotion associated with having a certain amount of money already. Therefore, another exercise which I suggest you for make money with your mind It consists in display. Visualize what you want as if you already have it. View precise and detailed images that confirm the desired income levelsuch as pay slips, checks, wire transfer receipts, or people who deliver cash to you. View pictures of your ideal bank statements. View pictures of things you could buy, do, or donate if you've already met your financial goals. Be sure to add the olfactory, auditory and kinesthetic dimension to the visualization. Money has a certain surface and a certain smell - try to imagine there tactile sensation of touching a lot of money as well as their scent in a situation where you have just come into possession of a certain amount. Or imagine an experience that you will allow yourself thanks to the money: you are in a gorgeous vacation spot and hear the sound of crystal clear waters crashing on the white beach while a rustle of wind caresses your skin. In the end, remember to add the feeling of gratitude and appreciation for the things you visualize as if they were already in your possession; this feeling it will really attract more abundance towards you.

We have therefore seen that make money with your mind it is not such an abstract and absurd concept: constantly feed your thoughts with pictures of the wealth you want. The millionaire mindset that you will mature it will encourage you to find the ways and means necessary to carry out your financial projects.

Spend less: here are 3 ways to save and live better

add a comment from Making money with the mind: how to attract wealth