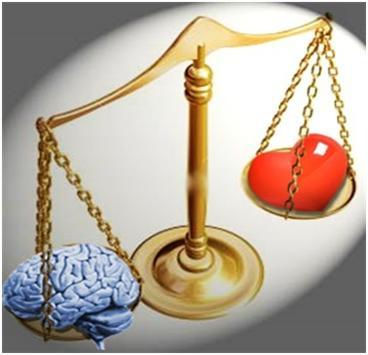 All of us, in a given moment of our life,
we had to to make decisions
difficult that we never wanted to take. In these cases we struggle
normally between two positions: we let ourselves be carried away by sensations or we decide
based on the rational aspects of the situation. Sometimes you can find a
intermediate point between those that are suggested to us by our emotions e
what the logic indicates. Other times it is impossible. So ... what do we do? Like
do we face decisions like this?

A recent study developed by University psychologists
DePaul of Chicago, shows us some unexpected conclusions: let ourselves be carried away
from emotions is not as bad an option as many think. These researchers asked the participants in the
I study that they made many different decisions; relating to the purchase of a
car, choice between different apartments, the holiday destination and between
various medical therapies. To simulate what happens in reality, it did not come to them
offer all relevant information with respect to the different options, so that
the participants only knew a few details. In this way one was created
situation of uncertainty quite similar to those experienced in everyday life. After the people made their decision (in
intuitively and letting oneself be carried away by emotions or in a rational way e
logical, analyzing the details), they were offered more details than the
opportunities and the benefits resulting from the decision were established. Thus, it was found that whoever took the
decisions based on his emotions, he usually got more benefits
compared to those who made decisions based on the rational aspects of
situation. For example, in one of the experiments only 26% of the people who
they thought rationally focusing on the details got one
a profitable response in the long run. On the other hand, the percentage of
profitable decisions increased by 68% among those who broke up
carry by their feelings. However, this technique has proven itself a lot
effective when quick decisions had to be made and not counted
with many details about the different options. However, the results are there
reversed when the experiment is repeated giving more time to the participants.
That is, when it is possible to take a calm decision it is better to reflect. So… A
what are these differences due to? Because emotionality can be more effective in one
situation rather than the other? Researchers speculate that when we should take
decisions quickly, our logical mind is not a good advisor, given
that our attention tends to focus on unimportant details.
However, our unconscious makes a very fast path through ours
previous experience and our knowledge and quickly draws a conclusion
which is popularly known as the fruit of intuition and of the heart. In other words, our logical mind needs to
time to think. The process of analysis, comparison and generalization
consumes time and therefore it is not always possible to find a solution in
short. On the contrary, the unconscious would be much faster. However, the unconscious is not infallible. Because of this,
when we have more time, it would be better to apply logic for
get to the gist of the problem and make a better decision.
Affective presence: did you know that we all have a unique "emotional signature"? ❯

add a comment of Making decisions: emotion vs. reason