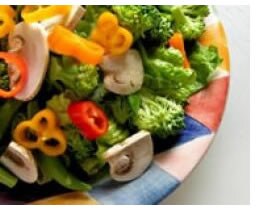 The macrobiotic diet is not a dietary scheme but a food philosophy that affects the entire lifestyle of those who follow it. The term macrobiotic derives from the Latin makros + bios, meaning big / long life; is a noun coined by the Japanese doctor Nyioti Sakurazawa between the end of the 800th and the beginning of the 900th century who, inspired by the ancient Japanese culture, then exported the food style of the long-lived Buddhist monks to the USA.
The macrobiotic diet pursues the balance between yin and yang, where yin refers to acidic foods and yang to alkaline foods; among these, there is a third category known as "naturally balanced" foods.

* According to bibliographic sources, the egg is placed in both yin and yang; therefore, in order to avoid the disclosure of conceptual inaccuracies, we will totally refrain from including them in the example that follows.
NB. For the macrobiotic diet, chewing and taste are of decisive importance, at least as much as the choice of foods themselves!
In practice, for every yin food there must also be a yang food, while balanced foods do not need to be compensated. In fact, subsequent revisions of the macrobiotic diet have adapted quite a lot to the contemporary lifestyle, partially losing their philosophical nature. Well, in the next example a REAL example of a macrobiotic diet will be proposed which, although not very applicable, will certainly be faithful to the idea of ​​Nyioti Sakurazawa and the Buddhist monks.
The positive and negative aspects of the macrobiotic diet are described in the article: Macrobiotic diet.
NB. The only food supplements tolerated by the followers of the macrobiotic diet (a little less by the ancient Buddhist monks) are based on vit. A, D, E, K and B6.