Lower trapezoids | How to train them with calisthenics

The trapezius muscle is a muscle often underestimated in relation to its importance. It is a very large muscle and has direct control over the movements of the shoulder blade. In all cases, shoulder problems are due to problems with the scapula and very often we refer to a lack of strength in the lower trapezius. The trapezius is divided into 3 districts based on the orientation of the fibers.

The lower trapezius originate from the seventh to the twelfth thoracic vertebrae and are inserted on the upper lateral margin of the spine of the scapula. It is innervated by the accessory nerve, the eleventh cranial nerve, and by the branches of the cervical plexus (C2, C3 and C4). The action of this muscle is to lower the shoulder blade and addure it. It therefore participates in the maintenance of the raised arm. It also has a stabilizing function of the scapula.

A good idea could therefore be to include both exercises that directly train the function of depression and scapula adduction and exercises that require stabilization work. The lower trapezius also works together with the serratus anterior in shoulder flexion, mostly between 60 and 120 degrees. Although the lower trapezius is a strong muscle, it is necessary to use low weights for its direct training. This is necessary for two reasons:

The very long lever arm is due to the fact that to better isolate this muscle it is better to perform extended elbow movements. Keeping the weight in the hand and the elbow extended means that the arm of the force on which the lower trapezius acts is given by the entire length of the lower limb. The second problem is quite clear; in particular, the upper trapezius tends to prevail in isolation movements. It can be understood that this happens because the shoulder is elevated while it should remain depressed.

It is possible to train the lower trapezes using only one band or even without. If you have the possibility, it is useful to use both methods.

The exercise is as follows: attach a rubber band at the sternum or a little lower. Grasp the elastic with a prone grip. Keeping the elbows extended, bring the hands above the head, in line with the torso, forming a greater angle with it of approximately 145 degrees. Slowly return to the starting position. 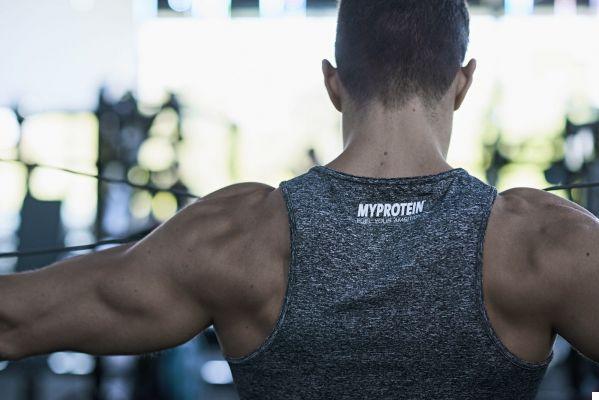 Another exercise is the following: position yourself prone with your arms at your sides. From here lower your shoulder blades and lift your arms off the floor. Perform a full shoulder abduction (like a lateral raise but bringing the arms up to the ears) always keeping the shoulder blades lowered.

As the arms progress in abduction the shoulder must be extra rotated. Achieve maximum abduction, hold the position for a couple of seconds and then return to the starting position. Movement must always be slow and controlled. When you are able to do 15 reps correctly you can hold a 1kg disc as additional weight.

Audio Video Lower trapezoids | How to train them with calisthenics
Pull-ups at home | What tools to use? ❯