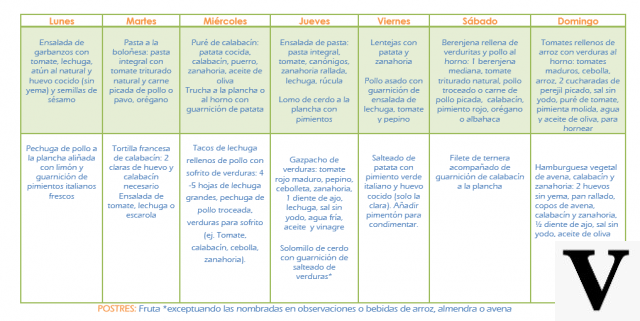 Excess sodium is the most important nutritional factor involved in the increase of blood pressure and in the onset of hypertension in predisposed individuals. High blood pressure is also favored by other predisposing factors such as: diseases (e.g. kidney failure), genetic and / or family predisposition, overweight, sedentary lifestyle, smoking, alcoholism, hyperglycemia, diet low in potassium and ω ?? 3 fatty acids , diet rich in saturated fatty acids etc.
In addition to representing a pathology in its own right, hypertension is a risk factor for the diagnosis of metabolic syndrome, a pathological complex that dramatically increases the risk of ischemic heart disease and / or cerebral vascular syndrome.

NB. The association of type 2 diabetes mellitus and arterial hypertension significantly increases its harmfulness to the body.

Originally, the low-sodium diet had as its main feature the limitation of foods containing added sodium or table salt and the abolition of the so-called "discretionary" salt (the one added at home). Today, the low-sodium diet is a much more complex eating pattern; first of all, the low-sodium diet is often also a low-calorie diet, this is due to the fact that many cases of hypertension recognize a multiple etiology, among which the excessive accumulation of adipose tissue (overweight and obesity) with an increase in the Mass Index stands out Body (> BMI or BMI, often in the abdominal area).
Furthermore, the low-sodium diet can be corrected on the basis of other existing pathologies, in order to make it effective also in restoring the other compromised metabolic parameters; in many cases, the low-sodium diet thus evolves into an anti-metabolic syndrome diet.

The most useful and frequent measures to be used in the composition of an "anti-metabolic syndrome" low-sodium diet are:

Furthermore, it is advisable to combine the low-sodium diet with: abolition of smoking, reduction of excessively stressful situations and start-up of an open-ended protocol of aerobic and anaerobic motor physical activity.
In summary, the low-sodium diet is aimed not only at moderating blood pressure but also at reducing overall cardiovascular risk, especially in the presence of other risk factors for ischemic heart disease and cerebral vascular syndrome (facilitated by atherosclerosis and hypertension or by hereditary factors such as aneurysms). NB. The low-sodium diet may also need the right precautions for the prevention of hyperuricemia or gouty attacks in predisposed subjects, but it is a rather peculiar and specific therapy.
In practice, the low-sodium diet aimed at compensating for hypertension and other predisposing metabolic parameters (overweight, hypercholesterolemia, hyperglycemia or diabetes, hypertriglyceridemia, high oxidative stress, etc.) is structured as follows:

Useful supplements in the low-sodium diet

The supplements useful to the low-sodium diet to decrease blood pressure are:


It may be necessary to associate some generic food supplements to the low-sodium and low-calorie diet; this is justified by the fact that in the most restrictive regimes, the relative food portions are often not sufficient to reach the recommended rations for mineral salts and / or vitamins.


In LIGHT BLUE: the perfect achievement of some desirable recommended rations of the most IMPORTANT nutritional components for the low-calorie, low-calorie and PREVENTIVE diet against metabolic diseases (weighted to the specific case).


In yellow: the total fiber intake which, optimally, should be around 30g / day; obviously, since it is a translation of a single day, it is not possible to show the weekly average which would also include legumes and other vegetables (richer in fiber than the foods present in the example).


In red: the intake of TOTAL simple carbohydrates which, according to the recommendations, should be 2-10% lower than the value obtained. However, considering the nature of the carbohydrates in place (exclusively intrinsic and not added fructose and lactose), it is possible to state that the glycemic index (GI) and the glycemic load (CG) of individual foods and meals are more than suitable. After all, consider that fructose (which represents most of the simple carbohydrates mentioned above) has the lowest GI of the available carbohydrates. The same quantity of simple sugars contextualized in a low-sodium but NORMOcaloric diet would have determined a lower ratio and suitability for dietary recommendations; therefore, it is a purely proportional issue.
Below we will report the rest of the low-sodium and low-calorie weekly example for the subject under consideration.