Losing weight in a group is better. And it works 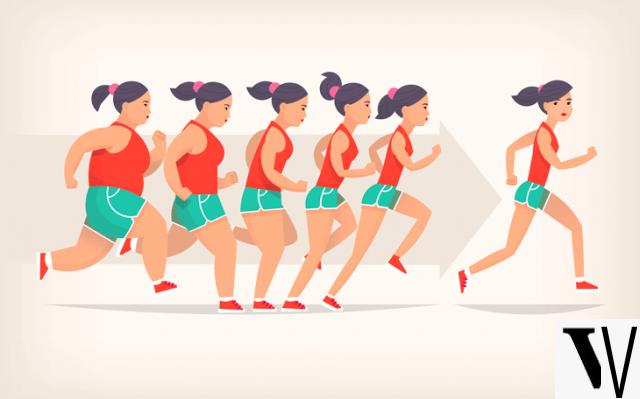 In the beginning it was Jean Nidetch, housewife of the sixties struggling with the extra pounds, which, becoming an entrepreneur, brought the metodo Weight Watchers (literally "the sentinels of weight"). What remains of his idea that the key to succeeding in losing weight is go on a diet with others and feel "supervised"? Very.

Weight loss groups in hospitals, specialized centers, associations, which over the years have seen requests multiply. But also blogs, forums and communities, with spontaneous initiatives by aggregation between thin aspirants who no longer want to feel lonely and sad in front of a plate of salad.

The most famous among the townspeople, Lose weight together.forumfree, has more than 140.000 visits, over 1300 users and 1200 discussions on the topic. It has a strict regulation and a specific purpose: lose weight in health. Unlike others, who even go so far as to propose dangerous "weight competitions", along the lines of the American reality show The Biggest Loser, where the competitor who slims the fastest wins money. The risks? "Restrictive diets, frustrations that result in binges and yo-yo syndrome, with a sudden recovery of the lost kilos », comments Dr. Emanuel Mian, psychologist and psychotherapist expert in eating disorders.

Lights and shadows of the virtual world

«Online groups can help if the kilos to lose are few, if the participants are healthy and no one suffers, or has suffered, from eating disordersContinues the expert. “But if there is no scientific moderator and if there is one almost obsessive underlining of the numerical data "weight", better stay away from it. Also watch out for those looking to sell something. Supplements, especially. Be wary of those who come up with a nickname, without name and surname, ”recommends Dr. Mian.

Praiseworthy instead initiatives of some former obese who have created groups on Facebook to share specific cooking recipes for those who have undergone surgery to lose weight, such as "Buono e bariatrico" or "Bistrot bariatrico".

The example of Casalecchio di Reno

Even in the real world, meanwhile, the old "group therapies" have evolved. "They are no longer just an opportunity to share and socialize, lead to concrete actions: for example, the beginning of that physical activity that you would not have undertaken alone ”, explains the doctor Evelina Villa, psychologist and psychotherapist responsible for the project "Losing weight together" of the Polisportiva Masi of Casalecchio di Reno, in collaboration with the Municipality and the local health authority Bologna Sud, aimed at people with various degrees of overweight.

«The project has existed for years but in recent times the requests have increased, so much so that a maximum number of participants (15 per group) must be established, which is essential to guarantee effectiveness. The program provides itineraries lasting a quarter and includes group meetings moderated by a professional, of approximately one and a half hours, once a week, e group sessions in the gym, with qualified instructors », continues the expert.

«The feedback is very positive, especially on the front of food awareness. Every year we help up to 40 people, who reach the weight loss target established: those with an obesity index manage to lose even 10-20 kilos ».

The example of Merano

At Terme Merano, in the hills of South Tyrol, the "Living with more lightness" project has had so many requests for membership that it has decided to welcome new participants after the path has already begun.

«Started in February, it will end in October but there is still time to register. The program includes a 9-month course of exercise and nutrition, with the support of specialists, in the gym, in the water and in the laboratories of the spa», Says the doctor Salvatore Lo Cunsolo, medical director of Terme Merano. «It is aimed at people over 16 with a body mass index greater than 25, resident or not, who understand the German language. We meet twice a week to practice fitness classes and prepare healthy meals together. THE there are 35 participants per group: in the end they lose an average of 7 kilos, but above all they learn a new lifestyle ».

The heirs of Mrs. Nidetch

What about Mrs Nidetch's old Weight Watchers? Since 2006 the country no longer exists. To carry on the method and to promise to do disappear a kilo a week following the Mediterranean diet, there are Weight Wellness consultants. They have transformed the ancient "reunions" into more active haunts, in which they also exchange practical tips and recipes. 1000 to 1500 people turn to them every year to lose weight in company.

«Group meetings are essential: we call them the "Appointments that make a difference"He explains Rosa Bavetta, Weight Wellness nutritional counselor in Milan and Monza. “During these occasions difficulties, obstacles, problems are shared, which are more common than what is believed ».

They are weekly, they last one hour each and take place in locations spread across the country (to find the one closest to weightwellness).

Paths to the hospital

If the problem isobesity (body mass index greater than 30), a hospital course is recommended, such as the one proposed by the Irccs Auxological Institute of Piancavallo (Verbania).

«Our group programs are inspired by one of the cardinal principles of the Mediterranean diet: conviviality»Explains the professor Gianluca Castelnuovo, psychologist and psychotherapist. «Diets often fail because they are based on deprivation: the group helps to rediscover the pleasant side of eating well».

How does it work? "A multidisciplinary team (endocrinologist, psychologist, dietician and others) makes the diagnosis and, depending on the case, can direct you to daily (outpatient) or long-term courses, with hospitalizations lasting 40 days ”, explains the expert. "The psychologist moderates the weekly group meetings. The motor part of the program includes various activities, from the exercise bike to the walk outside, always together. Participants are a thousand every year. The service, in the presence of a diagnosis of obesity, it is provided in agreement with the National Health Service (on an outpatient basis, a ticket of 66 € is paid for those who are not exempt) ".

The proposals of the associations

There are also “self and mutual help” groups, which they do not require the presence of doctors or psychologists: The moderator is a participant (currently or previously in care).

THENational association slim down together Onlus organizes weekly meetings (duration 90 minutes) in Friuli Venezia Giulia and Veneto and, in some periods, also in other Regions (andienonsolo / where-we-are / our-groups /).

The groups ofObese Friends Association, on the other hand, they are dedicated to those who have an obesity problem: they are free and can be composed of people who they have not yet started any treatment process or who have already gained weight loss. The duration is approximately two hours.

Audio Video Losing weight in a group is better. And it works
Ketogenic diet, what it is and when it is needed ❯

add a comment of Losing weight in a group is better. And it works