Lose weight: treatments to do at home with bandages and muds 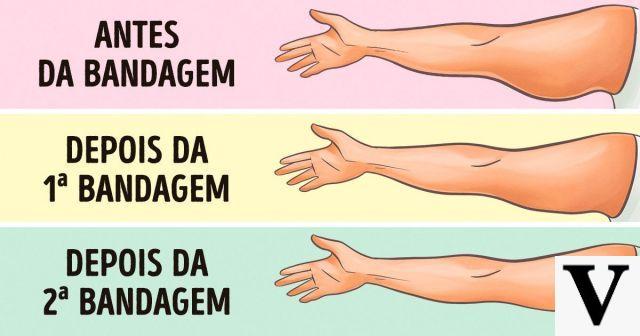 If, before going out in the sun, you need one last minute remise en forme in the most critical points, you need targeted and fast-acting cosmetic treatments. For example a beauty program inspired by cabin treatments, such as bandages or muds.

To enhance the results, do a scrub before proceeding with the application of the product, like this favor the penetration of active ingredients. At the end of the session, do some movement (even a simple walk is fine), so you stimulate the drainage even more.

The “mummy effect” bandages can be found in many versions also for home use and they are a real cure-bump. «You wrap the areas you want to remodel with disposable strips of lightweight fabric, generally cotton, slightly elastic, soaked with slimming and toning substances, such as fucus, caffeine, ginseng or with a gel enriched with phosphatidylcholine; draining active ingredients such as saline solutions and butcher's broom; cooling ingredients such as mentylactate », explains the cosmetologist Umberto Borellini. «The slimming bandages act on several fronts, first of all for the principle of osmosis, or rather for the transfer of active ingredients, but also for the vasoconstrictive effect induced by the cold and for the gradual compression exerted by the bandages, which in synergy produce a slimming, draining, firming and anti-cellulite action».

The advice is to wrap yourself in bandages once a week, for at least 50 minutes: thanks to the drainage you will have suffered the loss of one or more centimeters, which is perfected after subsequent applications.

Sludge acts both indirectly and directly. The indirect remodeling effect is due to the increase, during the laying period, of the skin and subcutaneous temperature which stimulates drainage, cell metabolism and the elimination of waste and interstitial fluids, with benefits also for cellulite.


«The direct one is given from algae and salts, such as phosphorus, calcium, magnesium, iodine, which have a draining and lipo-reducing action as they restore, among other things, the correct balance of ionic exchanges of the superficial fat metabolism », says Borellini. There are two other significant actions: the smoothing one on the skin and firming the tissues, always due to the substances assimilated by osmosis, which help to "contain", almost with a sheath effect, the curves. The frequency is 2 weekly applications, with variable application times according to the chosen product (on average, from 30 to 40 minutes).

add a comment of Lose weight: treatments to do at home with bandages and muds