It is essential to start the article with a premise regarding the nutritional correctness of this diet. In this regard, we remind you that there are no miraculous diets capable of promoting localized weight loss, and not even balanced diets based on a single ingredient. 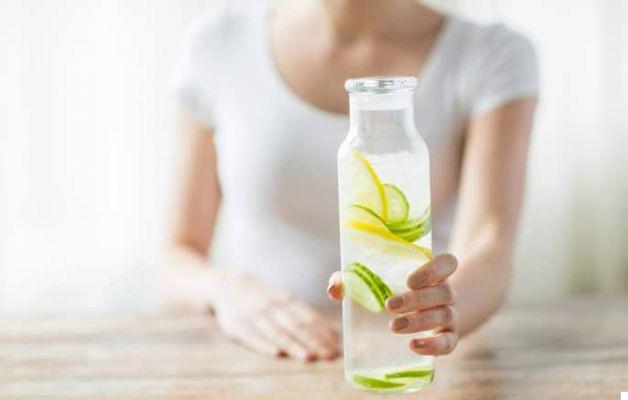 More generally, all dietary regimes that involve the use of a single food (grapefruit diet, water diet, watermelon diet, egg diet, etc.), are to be considered real hoaxes.
The goal of the following article is to describe the cardinal principles of the lemon diet, without endorsing or advertising it in any way.

Lemon Diet: How Many Are There?

By lemon diet we can mean various food strategies, since the name is not registered or protected in any way.
Among other things, lemon is a fairly common product and being generally associated with the concept of "healthy food", it is widely used in the so-called "weekly" or "magazine" diets.
There are therefore different lemon diets: some are aimed at slimming, others at detoxifying the body.
Below we will go into detail regarding the best known and most used lemon diet, namely the "Lemonade Detox Diet”(Lemon Detox Diet), also known as the“ Master Cleanse ”.

The lemon detox diet has been around for nearly 50 years, during which time it has undergone many variations from the original strategy. Recently, Master Clease has become popular again, but only thanks to the endorsement of famous "pop idol" Beyoncé Knowles.
The purpose of the lemon detox diet is to degrade and eliminate toxic substances in the body, also contributing to weight loss in a short time.
Its creator, Stanley Burroughs, invented it to try to cure some diseases of the digestive system and after various experiments he published a book about it.
Entitled "The Master Cleanser", the text speaks above all of a hypothetical clinical success in the treatment of a patient suffering from gastric ulcer (with a history of failure of about three years behind him): "Without remedies, the patient followed the directives of Burroughs and in eleven days he was totally healed ”.
The same source cites other similar cases, all characterized by the resolution of the problem. Moreover, in addition to the improvement of the disease, Burroughs ensures a reduction in excess body weight.
Obviously, these statements have aroused many doubts, but the evidence of healing seems to be more than one.
Recently, Tom Woloshyn released another book called "The Master Cleanse Experience", published in 2009 by "Ulisse Press". The text summarizes the clinical experience of this treatment and, in addition to the remission of pathologies associated with weight loss, cites many other benefits, such as: improved sleep, outlook and clarity, and remission from certain addictions.
Scientific developments have clearly identified the risk factors for the accumulation of certain waste, which are: improper diet, sedentary lifestyle, stress, pollution, etc .; in fact, the lemon detox diet works on the principle that, to deal with any disease, it is necessary to completely purify the body. This is why the Master Cleanse is not only aimed at itself, but represents the first link in a long chain of habits to be adopted indefinitely.
By adhering to a healthy diet, exercising regularly and reducing general stress, it would also be possible to permanently maintain the results obtained.

According to Tom Woloshyn, undergoing the detox diet is like preparing for a marathon; it is necessary not to look away from the objectives and get rid of all doubts.
The creator offers this insight being aware, more than anyone else, of the side effects induced by the Master Cleanse system.
According to Woloshyn, some may benefit from a preliminary phase of a vegetarian diet to reduce the trauma typical of starting therapy. In addition, those who regularly take coffee or cola-like drinks should gradually reduce their daily intake by supplementing with pantothenic acid (vitamin B5), which should prevent the onset of caffeine withdrawal migraines.
People who have undergone an organ transplant and anyone taking immune suppressing drugs cannot deal with this system. In fact, Woloshyn warns that the lemon detox diet stimulates the immune system and effectively inhibits drug results; according to him, this combination could lead to rejection of the transplanted organ.

Organization of the Diet

The Lemon Detox Diet is a cleansing program that encourages the intake of a drink consisting of the following ingredients: lemons, pure maple syrup, cayenne pepper and water. The treatment period lasts about ten days.
To create this drink, simply mix the ingredients in the quantity suggested by Burroughs and drink about 6 glasses a day. In case of hunger, it is allowed to increase the dose up to 12 glasses.
It is also advisable to take a laxative every morning and every evening, in order to evacuate at least three times a day. This process will allow you to completely remove the toxins accumulated inside the intestine.
Master Cleanse lemonade must be drunk fresh, without subjecting it to microwaves or other heat sources, to avoid reducing the effectiveness of the active ingredients (vitamin C, other antioxidants, etc.).
According to the creator, hunger pangs will progressively diminish with each passing day.
Stopping the lemon detox diet is as critical as starting it. The first day you should gradually introduce orange juice, the second soups and broths, the third fruit and vegetables. It is necessary to be very careful not to overdo or accelerate the recovery and it is recommended to always drink plenty of water. When finished, it will be easier to follow a healthy diet by avoiding or cutting down on foods of animal origin.
The gains from the Master Cleanse diet are an effective strategy to change old habits and start a prevention against certain diseases.

Over the years, Stanley Burroughs' original recipe has been slightly modified, but not always successfully. Other fruit juices and / or capsules and / or protein powders have been added; however, some ingredients reduced the effectiveness of the diet.

The purpose of the program is to “put the digestive tract on vacation for ten days”, so it shouldn't be allowed to ingest other foods. Not surprisingly, Stanley Burroughs also discourages taking supplements and vitamins, as they could interfere with the body's purging system. Lemon would be a natural source of minerals and vitamins, while maple syrup should be able to provide the most urgent energy needs. Also the amount of water should not be too little or too much, as it would compromise the recommended intake of 6-12 glasses of lemonade per day.
The recipe provided by Stanley Burrough is as follows:

For those who don't like this lemonade, you can:

The lemon diet, understood as the Master Cleanse, is a potentially risky food strategy; not so much for the infamous (and imaginative) strengthening of the immune system with the consequent risk of rejection of transplanted organs, as for the enormous stress to which the organism is subjected.
In fact, the lemon diet is a real form of fasting, which according to its discoverer should be controlled by the intake of a simple drink.
The dangers of the Master Cleanse diet are mainly nutritional.

The body and mind of a person who fasted for about 10 days cannot function optimally and below we will list some of the side effects hypothetically related to the lemon diet:

Ultimately, leaving out the purifying effect (on which it is not possible to put forward certain hypotheses), it is rather evident that the lemon diet represents a very bad, risky and absolutely inapplicable food strategy.
Especially in some conditions - such as pregnancy, breastfeeding, menopause, certain pathologies, intense sport etc. - it even represents a serious health risk.