Leeks, cousins ​​of garlic and onions, have a delicate and inviting flavor; versatile in the kitchen, they are antioxidants, diuretics, laxatives, anti-cholesterol and vitamin supplements. Let's get to know them better.

> 2. Properties and benefits of leeks

> 3. Calories and nutritional values ​​of leeks 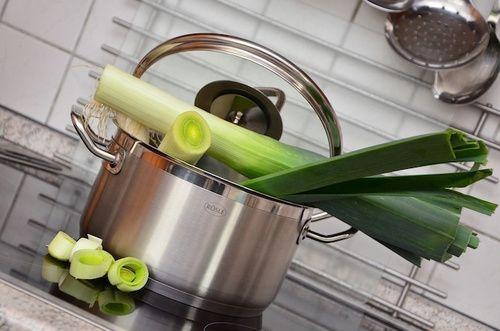 Leek is a variety of vegetable known scientifically with the name of Allium Ameloprasum, a monocotyledonous plant belonging to the Liliaceae family, also placed by modern cataloging in the Amaryllidaceae.

It has a elongated cylinder structure, with green leaves on the outside and lighter towards the heart of the plant. They are grouped in the opposite way, forming a kind of large stem.

I fiori they are very light green, almost white, and form a flowery umbrella that develops in the second year of the plant. Originally from the Mediterranean areas, leek is widely cultivated even in areas with colder climates. Unlike garlic and onion, its bulb does not grow underground.

Properties and benefits of leeks

Leek has diuretic properties, laxative and is a detoxifying and moisturizing food. Great natural antioxidant, thanks to the presence of flavonoids, minerals and vitamins, it has significant benefits for human health, especially when consumed raw.

Laxative, antibacterial and natural moisturizer, leek is great ally of the cardiovascular system and circulatory, as it helps to destroy bad cholesterol that clogs veins and arteries. Similar in properties and benefits to onion, it is richer in calcium, iron, fiber, protein and vitamins, especially vitamin C. They also contain vitamins A, K, E.

The white part of the leek is consumed, which constitutes the heart of the plant, generally discarding the green apical part. This is excellent if consumed in soups, soups and risottos and it should be remembered that, compared to the central part, it has a higher concentration of vitamins. Even better if the leek is eaten raw, in salads for example, so as to make the most of its nutritional values.

Leeks among the best foods of the winter season: discover the others

Calories and nutritional values ​​of leeks

Leeks, for the beneficial virtues listed above, they are allies of cells and the renewal process that interests you; allies of the immune system, they defend the body from fungi and bacteria.

They can also be defined liver allies, for its purifying properties, and intestinal and bladder functionality. Let's not forget the benefit they bring to blood circulation, veins and arteries, also containing anti-cholesterol substances.

National symbol of Walesknown in Africa and the Middle East, the primacy for variety is held by French neighbors; leek, this versatile vegetable was already appreciated in the times of the Greeks and Romans, with whom the Emperor Nero was so fond of it as to be nicknamed "the porrofago". In Cervere, in the Langhe, the traditional Leek Fair takes place every year around November.

A recipe with leeks

For two / three people. Cut a couple of leeks into thick slices, discarding the outermost green part. Put them in a large pot with just over half a liter of water, three diced potatoes and a pinch of salt. When it starts to boil, count about 25 minutes of cooking.

Turn off the heat and blend everything with the hand blender for a few seconds. Add a tablespoon of Parmesan cheese to the cream and, if you like, some cream or vegetable soy cream. Serve accompanying with freshly ground pepper and croutons.

Leeks among the March vegetables