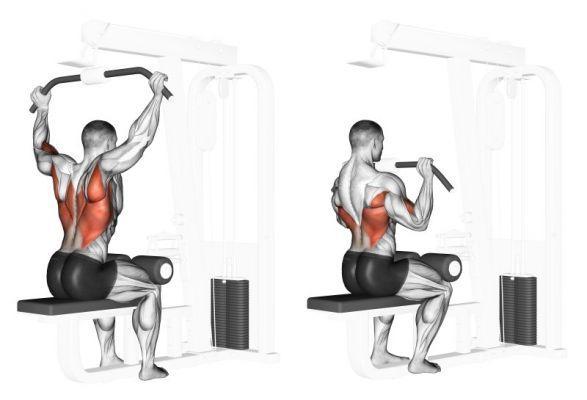 The starting position sees the athlete sitting on the lat machine with the legs locked, the back in its position of strength and the torso tilted back 20/30 degrees. The hands holding the bar with a prone grip, therefore with the back facing the athlete, are placed at a distance greater than that of the shoulders which are almost completely flexed in the transverse plane and abducted in the longitudinal plane while the elbows are extended. The shoulder blades, rotated upwards, can be elevated or depressed; in the second case there is no action 6. The execution consists in pulling the bar down / back, first by depressing the shoulder blades (if the starting position was with the shoulder blades elevated), then, maintaining the fluid movement, adducing the shoulders in the longitudinal plane and extending them in the transverse plane, while the shoulder blades rotate downwards, are adducted and the elbows are flexed. The movement ends when the bar touches the upper chest. The inclination of the torso does not have to vary throughout the execution of the movement, however it is possible to partially extend the hip during the concentric phase of the movement as a cheating technique. This variant is aimed at the development of the upper bundles of the great dorsal, at the central and inferior bundles of the trapezius, while in the flexion of the elbow the load weighs more on the brachioradialis and brachialis. The involvement of the pectoralis major is greater than in the supine or neutral variant.