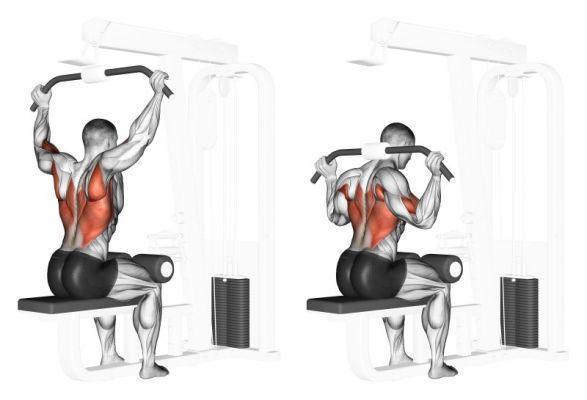 The starting position sees the athlete sitting on the lat machine with his legs locked, his back in his position of strength is perfectly vertical a few centimeters ahead of the pulley of the machine. The hands that hold the bar with a prone grip, therefore with the back facing the athlete, are placed at a distance greater than that of the shoulders which are abducted in the longitudinal plane. The elbows are extended. The shoulder blades, rotated upwards, can be in elevation or in depression; in the latter case there is no action 5. The execution consists in pulling the bar down on the pure vertical plane, first, depressing the shoulder blades (if the starting position was with the shoulder blades elevated), then, maintaining fluidity in the movement, adducting the shoulders on the pure longitudinal plane, while the shoulder blades rotate downwards and are adducted and the elbows flex. The movement ends when the bar touches the upper back behind the neck. This variant is aimed at the development of the lower bundles of the great dorsal which most influence the "V" shape of the thorax; while in the flexion of the elbow the load is more on the brachioradialis and brachialis. The involvement of the pectoralis major is less than in the prone-to-front variant.