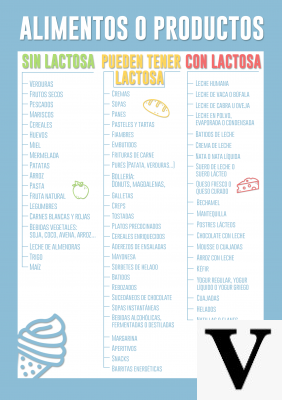 What is the lactose-free diet?

La lactose-free diet it is a totally dietary regime private (or almost) of the typical sugar of milk.

What is the lactose-free diet for?

Eliminating lactose from your dietary habits is usually a real one need of the so-called intolerant lactose.

These, for different reasons, definitively or provisionally, show ainsufficiency dell 'enzyme intestinal deputy for the digestion of lactose.

This involves the onset of more or less clinical symptoms and signs uncomfortable or even, as happens with the suckling, even serious - for the complications in the medium and long term.


Before going into the merits, however, let's make a brief summary of lactose and related food intolerance.

For further information: Lactose: What it is and what it is used for

Lactose is a carbohydrate, more precisely an oligosaccharide-disaccharide composed of glucose and galactose.

It has a modest sweetening power and provides the same calories as other sugars (3,75 kcal / g).

It is the first source of calories in nature, together with fatty acids, available to the newborn and up to weaning.

Its quantity in milk varies according to the mammal species and the lactation period.

It is digested in the small intestine, thanks to an enzyme located on the brush border of enterocytes called lactase which separates glucose from galactose; much of the latter will then be metabolized by the liver into glucose.

Genetic and absolute lactase deficiency can be dangerous in the newborn; if not diagnosed in time it can lead to severe malnutrition.

On the other hand, even in subjects who have had it, after weaning it can thin out to the point of compromising the ability to digest lactose.


Many microorganisms have the ability to use lactose for energy; think of lactic bacteria which, by fermenting, release compounds such as lactic acid (as occurs in yogurt).

For further information: Lactose in Food

Adult lactose intolerance is one condition, not a disease. For the newborn, as mentioned above, the situation is different - specific delactosed milks are available for pre-weaning.

Caused by lactase deficiency, lactose intolerances are divided into: genetics e acquired; the latter can also result transient (mainly due to an infectious or inflammatory bowel disease, but which can be reversed by gradually reintroducing lactose into the diet).

Lactose intolerance affects certain populations more than others, such as Asians, and more families who do not consume milk and derivatives continuously.

These are due to the indigestible residue of the lactose which first attracts water from the mucous membrane of the small intestine into the lumen, then once in the colon they determine a lively fermentation by the physiological microbiota.


They disappear with the elimination of lactose from the diet.

How to structure a lactose-free diet?

The total absence of lactose can only be obtained by means of an accurate selection nutritional, which requires many exclusions e replacements.

It must be said that not all intolerances are the same. There subjectivity plays an important role in the management of the diet, as different can be: theetiology, type and severity symptoms.

This means that the diet can to vary, as the case may be, in his concentration tolerable maximum lactose present.

To give a practical example, among the intolerant there are those who tolerate yogurt, which shows a lactose level of 2-7 g / 100 g (depending on the level of skimming and lactic fermentation); others, on the other hand, could not even "lick the spoon".

As long as it comes to to exclude, the problems are really limited. It is sufficient to pay close attention to both milk and its derivatives containing lactose, but also to the occult ingredients that contain them. For this it is always necessary to carefully read the nutritional labels.

If we talk about replacements instead, the discourse changes. To replace a food, you need to know its function in the diet.

Nutritional function of milk and derivatives

Milk, which we remember being a lot Useful from a nutritional point of view but DON'T essential in the post-weaning diet, it is an excellent source of: water, high biological value proteins, phosphorus, calcium, vitamin B2 or riboflavin and vitamin A or retinol.

Water, protein, phosphorus and vitamin A can be easily obtained from other nutritional sources. It is different for calcium and riboflavin, which needs can be met with extreme effectiveness by consuming milk and derivatives, and less easily by excluding them.

It is no coincidence that "Milk and Derivatives" constitute the so-called II ° fundamental group of foods (sources of calcium and vitamin B2, in fact).

No we are claiming that riboflavin and calcium are contained alone in milk, but it is undeniable that by removing them it is necessary to replace them with other foods with similar functions. But which ones?

Other Sources of Calcium

Nutritional sources of calcium other than milk and derivatives

Excluding milk and derivatives from the diet, they really remain poche good sources of calcium.

Among the products of animal origin, meat and eggs are not considered good sources of calcium.

On the other hand, some fishery products stand out, first of all minnows to be eaten whole with the bone (usually fried, such as lattarini, acquadelle, whitebait etc.) and eggs di fish. As can be easily deduced, their role in the diet is marginal.

To consider instead, the contribution of calcium in clams bivalves such as oysters, in cephalopods such as squid and octopus, and in some crustaceans like shrimp.

All the remaining calcium must be introduced with the vegetables. Some are discrete sources oil seeds like almonds and sesame, sure vegetables such as black cabbage and rocket, the fibrous portion and the germ of cereals, some vegetable such as soy but not only, and aromatic herbs and dried fruits - of which there is a very marginal consumption.

However, it must be said that vegetable calcium suffers from the presence of anti-nutrients like acid oxalic e phytic.

Rather abundant in legumes, in the fibrous portion of cereals and in some vegetables, if not destroyed by cooking - or diluted by soaking - they tend to bind calcium, blocking intestinal absorption.

That is why calcium intake from plant-based sources should always be top to the recommended one - the recommendations are based on an omnivorous and complete diet.

For further information: Foods Rich in Calcium: What Are They?

Other sources of Riboflavin or vit. B2

Nutritional sources of riboflavin or vit. B2 other than milk and milk products

For riboflavin, the situation is a bit simpler.

Reaching your needs without milk and dairy products is not a difficult task, as long as you include one-off offal and especially the liver, rene, heart.

The vitamin B2 concentration of bovine liver is even higher than that of powdered milk, which in turn contains 10 times more than liquid milk.

Going down a lot with the vitamin level, we then find the wheat germ, certain legumes such as soy, some vegetables such as fresh spinach and certain oil seeds such as almonds, etc.

But be careful, if it is true that, unlike calcium, riboflavin is not afraid of the presence of antinutrients, it is equally true that it is a molecule thermolabile.

Degradingi with the cooking, the consumption is really much poorer than the estimate made raw. Also for this reason, milk and derivatives - which unlike offal or legumes do not necessarily require cooking - are considered the most advisable sources for this nutrient.

For further information: Vitamin B2 in Foods

Foods for the lactose-free diet

Among the foods for a lactose-free diet we can include all foods that do not contain milk sugar.

In this paragraph, however, we will better explain which of the "controversial" nutritional sources can be included in this regime.

First of all, for those who totally exclude natural milk, it might be an excellent idea to include that delactosed or his substitutes vegetable but strictly reinforced in calcium and riboflavin.

On balance, these are dietary foods that are very useful to meet these needs without having to upset the diet with foods that are unwelcome or unrelated to one's habits.

Let's talk for a moment about some dairy products that, according to many, could be introduced into the lactose intolerant diet without fatal consequences. They are mostly those long fermented and / or widely seasoned.

In the first category we insert it yogurt, Greco, buttermilk, kefir and skyr.

It should be noted, however, that in these products the lactose concentration is not so close to 0. Therefore, they could find application especially in the lactose-free diet intended for intolerance. little serious, maybe like transient - due for example to infectious gastroenteritis. Note: usually, as the fat fraction increases, the quantity of lactose also decreases.

Foods "no" for the lactose-free diet

The foods are obviously not those belonging to the category of milk and derivatives that contain lactose, but also those that contain among the ingredients milk powder (or milk powder) and milk concentrated / condensed.

The presence of occult lactose must also be taken care of. Several are rich sweet snacks, such as wafers and other biscuits filled with creams, milk chocolate and snacks of various kinds. Furthermore, being used as an amalgamant, absorbent and partly a preservative, milk powder can be included in the recipes of various sausages such as salami, cotechino, zampone and other cured meats such as Ham cooked.

add a comment of Lactose Free Diet: Foods Yes and Foods No