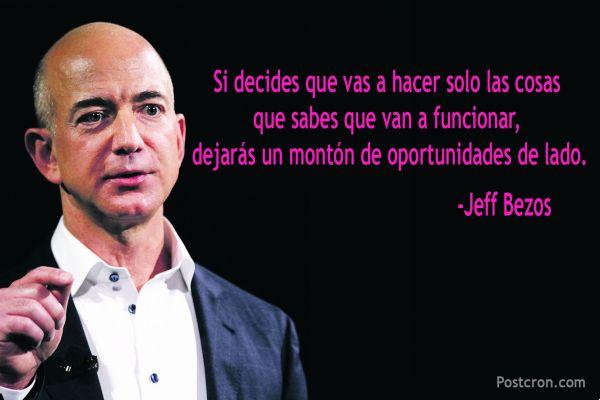 Let's discover the heritage, life, career, quotes and advice of Jeff Bezos, the founder of Amazon and the richest man in the world.

Jeff Bezos is the founder of the hugely popular Amazon eCommerce, one of the world's largest and most successful online marketplaces.

There has been a lot of discussion about who was the richest person in the world, as Jeff Bezos' net worth has fluctuated a lot in recent years. However, Jeff recently overtook Bill Gates and became the richest man in the world.

Jeff Bezos now tops the list of the world's richest men with an estimated net worth of $119.9 billion.

His grandfather was a regional director at the US Atomic Energy Commission and soon retired, retiring to his own ranch. So in his youth, Jeff spends his summers at his company, working on the farm.

Bezos has always shown an interest in science and technology; just think that he installed an alarm system in his room to keep the younger siblings away from him. Jeff then attended Miami Palmetto High School, where he participated in the University of Florida's student training program, receiving a major award: the Silver Knight.

Jeff graduated from Princeton University in 1986 and went to work on Wall Street in the computer science field. There, he was commissioned to build a network for an international trading company known as Fitel.

In 1994, he founded Amazon.com, which initially began as an online reseller of used books. The inventory is growing rapidly, as is the popularity of the site; and in 1998, Jeff makes his entry on the Forbes 400 list.

Here are some of the highlights of Jeff Bezos' career:

"You have to be willing to be misunderstood if you want to innovate."

"The only way out of a dead end is to invent a way out."

“I knew if I failed I wouldn't regret it. On the contrary, my only regret would have been not trying."

"A company should not depend on appearances, because appearances do not last."

“If you provide a good experience, customers communicate it to each other. Word of mouth is a very powerful advertisement."

"If you don't understand your business in great detail, you will fail."

Now that you know all about Jeff Bezos' net worth and success story, here are some of the best lessons you can learn from Bezos:

1. Be prepared to take risks

Bezos did not expect success when he created Amazon.com. At that time, the online world was completely new and its future was uncertain. Bezos took a risk because he knew the probability of failure was high.

However, his mindset paid off (and great too).

2. Play for the long haul

In Amazon's early days, Bezos warned investors that the company was years away from turning a profit.

But Bezos knew that things were not always going to be easy and that to generate income you have to work at it, which implies thinking and playing for the long term.

3. Start small, then branch out

Amazon started with books. It was a humble and simple start to what would become an online empire, selling hundreds of thousands of products.

The important lesson we can learn from this is to start with what we know, then proceed to diversify and expand!

Jeff Bezos has gone from struggling to sell books, to being able to sell whatever he wants. Amazon has become an absolute powerhouse and is taking control of the new world. To think that it all started with a guy trying to sell used books makes you smile.

Jeff Bezos' net worth is currently estimated at $119.9 billion, a truly impressive figure. What would you do if you had all that money?

add a comment of Jeff Bezos: net worth, life, quotes and advice