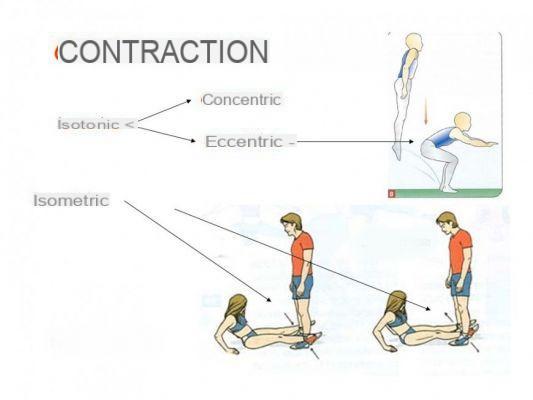 - esercizi which involve muscle strain may be also classified according to the length and tension of the engaged muscle.

Depending on the case, we talk about exercises isotonici o isometrici.

Exercises isometrici, on the other hand, they do not produce joint movement but they develop tension within the muscle to support a load.

Both the types of exercises can be used for develop muscle stability and endurance. Exercises isotonici however they are generally best for increasing functional strength and mass.

Exercises isotonici they subject the muscles to a movement performed under the strain of a constant static weight. During the execution the muscle must overcome a more or less high resistance to be able to carry out the movement, and with the passage of time it will tend to develop, becoming stronger.

Isotonic exercise may be further divided into two categories: concentric and eccentric.

Exercise concentric it occurs when a contraction causes a muscle to shorten. For example, the bicep shortens when the elbow bends during a dumbbell curl.

Exercise eccentric instead occurs when a muscle not only contracts, but also stretches. Lowering a dumbbell to the exercise start position is an example of an eccentric exercise.

Another sub-category is that of isotonic isolation exercises, which involve the carrying out a movement around a single joint. They are usually used to train specific areas of the body.

The main muscle involved in producing joint movement is called the agonist and is the target muscle in this type of exercise.

There is also movement compound isotonic, which contrary to the previous one occurs in more than one joint. Over to request an agonist, compound exercises they also recruit muscles called synergists to assist in the movement. The latter tend to be smaller than the agonists.

Compound exercises are generally more functional than isolation exercises, as they mirror everyday or sporting movements and have practical application in real-life activities.

How to perform a push-up

One of the best known isotonic exercises is the push-up.

During the entire duration of the performance, remember to keep your back straight.

In isometric exercises there is no movement of the joints or of the muscle ma if it maintains the latter in tension without moving it for a series of seconds and the exercise is repeated for a predetermined number of times.


One of the main benefits of isometric exercise is that it does not require any equipment and therefore it is ideal to be done at home.

Exercises for the lower body

This typology is particularly suitable for training the lower part of the body, which contains most of the overall muscle mass.

Keeping this area of ​​the body strong and well developed can make everyday activities like walking, climbing stairs, and standing easier.

Examples of isometric exercises for the lower body are the wall squat hold, the hip bridge, the static lunge, the static knee extension and its pull against a pillow or small medicine ball.

How to do the hip bridge

Exercises for the upper body and the core

Although the upper body and core represent a smaller muscle area than the lower body, these muscles are no less important because they help lift heavy objects by supporting the spine, stabilizing the shoulders and encouraging good posture.

add a comment of Isotonic and Isometric Exercises: Differences