Inferiority complex: You more than me and I less than you 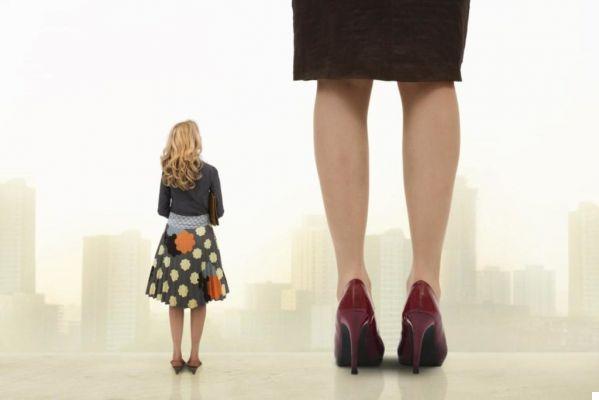 We all make comparisons. Indeed, comparison is one of the fundamental activities of thought. Since childhood we learn to know the world through comparison. As we compare people, things and situations we get a better idea of ​​the world around us.

But the problem starts when we compare ourselves to others and end up despising ourselves. Then that's when the inferiority complex arises and we feel smaller, miserable, less important and capable than others.

What is the inferiority complex?

The inferiority complex concerns a person who has low self-esteem and a permanent feeling of not being up to others.

This categorization is based on Adler's ideas, for which there were two types of inferiority complex:

- The primary inferiority complex. In this case the origin can be traced back to childhood, when the child experiences feelings of weakness, helplessness and dependence. Later these feelings can be reinforced by negative confrontations with siblings, classmates, or in relationships.

- The secondary inferiority complex. In this case, the origin is found in adulthood and is linked to the often unconscious feeling of not being able to achieve safety and success. The person experiences negative feelings about his abilities and feels inferior to others, whom he considers confident and successful people.

However, whatever the period in which it arose, the inferiority complex is based on a generalization, in irrational judgments about ourselves. This misconception becomes so fixed in our mind that it ends up affecting our life and the image we have of ourselves.

Why does the inferiority complex appear?

Most people who suffer from the inferiority complex think that this is due to their defect, often physical, or to the fact that they are not competent enough in some areas. But in reality this is just an excuse.

Some people can take advantage of this alleged "flaw" by learning to be more resilient, while others focus on the negative impact and end up aggravating the problem by letting it limit it. In this sense, Henry C. Link stated that: "while one person does not try because he feels inferior, another continues to make mistakes and is improving little by little".

Obviously, this way of dealing with "difference" largely depends on our beliefs, many of which were passed on to us in childhood. For example, if we think that a person can only be successful if he has managed to accumulate goods and money, we are likely to feel inferior and failed if we have not been able to do so. If we think that to be happy you have to be physically perfect, we will be perpetually obsessed with our appearance and every little "flaw" can contribute to giving rise to the inferiority complex.

People who believe that everything must necessarily be black or white, good or bad, or all or nothing, are also more likely to underestimate and despise themselves because they are unable to appreciate the different shades of life. These people, comparing themselves with others, always end up focusing only on the negative things and end up feeling inadequate or disadvantaged.

The danger of overcompensation

Some people, when they feel inferior, act as if they really are, so they end up reaffirming their low opinion of themselves. It is a self-fulfilling prophecy. These people also tend to isolate themselves from others because they think everyone will notice their "flaw" and mock them. In some cases they can also develop fears or phobias. They become addicted people who need someone stronger by their side to offer them lifelong emotional support.

In other cases, people with an inferiority complex react by unconsciously activating an overcompensation mechanism. That is, they try to compensate for the "flaw" by setting themselves an almost impossible goal that haunts them and ends up causing them even more problems.

Indeed, it is important to distinguish between compensation and overcompensation. Compensation simply involves developing some resources to make up for a deficiency. In this case the person is aware of the problem and works to compensate for it by improving other skills and competences.

Overcompensation goes one step further, it involves a desire to feel superior. People who implement an overcompensation mechanism often exhibit extreme behavior, they try to excel in some areas at any means by projecting a false image of security. For example, a man with an inferiority complex associated with masculinity may react with misogynistic attitudes that cause him to despise women.

Another problem with overcompensation is that it normally occurs unconsciously. That is, the person does not accept that, behind these extreme behaviors, the feeling of inferiority is actually hidden. Obviously, in this way we end up sinking into a vicious circle that does not allow us to grow. In fact, even if these people manage to achieve certain results or even excel in some areas of life, they never manage to feel better, because they do not overcome the inferiority complex that underlies them.

How to overcome the inferiority complex?

To repeat endlessly positive phrases in front of the mirror is completely useless. In fact, a study conducted by psychologists at the universities of California and Yale indicates that people with low self-esteem feel worse when they repeat to themselves phrases like: "I totally accept myself" or "I will be successful". It's not that easy to deceive yourself.

1. Determine what you feel inferior to. The first step in solving a problem is knowing that it exists, becoming aware of the difficulty. If you suffer from a complex, you have to find that part of yourself that you don't like.

2. Assess the extent of the damage. The inferiority complex usually starts with a deficiency, weakness or defect, but gradually spreads to the whole personality. Evaluate how this feeling has affected your life. It doesn't mean finding reasons to get depressed, but understanding the extent to which this complex has limited you.

3. Start thinking in terms of diversity. Being inferior to something implies a comparison, in which we often use too rigid schemes. Instead of comparing yourself to others, you'd better start seeing life in terms of diversity. It's not about being better or worse, it's just about highlighting what makes you unique and different.

4. Focus on what you can improve. Crying over spilled milk is counterproductive. We all have weaknesses and limitations, if we are unable to go further in some fields, it is best to focus on those areas where we can give our best. Of course, we don't have to obsess over compensating for a flaw at all costs, we just have to find satisfaction and happiness. Remember that you don't need to prove anything to anyone, just make sure you develop the skills that make you happy.

5. Be yourself. In a society where everything is standardized and homogenized, it is normal for many people to feel bad if they perceive that they are different. But what is truly absurd is to pretend to be the same as others, because in this way you are suffocating your identity and also your value as a person. Look inside yourself, find out who you are and have the courage to be different.

Over time we love more, but fewer people ❯

add a comment of Inferiority complex: You more than me and I less than you