Indecision: Our body shows our insecurity 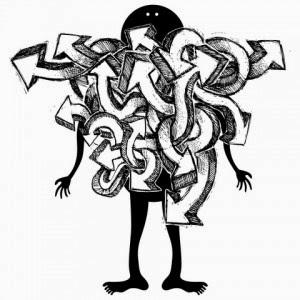 Many things in life arouse ambivalent feelings, feelings that do not allow us to clearly glimpse which is the right path to follow. The arguments in favor seem convincing to us, but even those against it, it is as if the decision had to find the right balance between two positions so distant.

Our mind falters, moves from side to side, analyzing different options. This is a reality, but… have you ever wondered what happens to your body when you are undecided?

Now a study carried out by the University of Amsterdam has raised the same question and offers us a completely surprising result.

The researchers asked participants to read two different articles regarding the abolition of a law that sets a minimum wage for employees. The first text referred only to the positive aspects of the abolition of these regulations, while the second article analyzed all the pros and cons of abolishing the minimum wage.

After reading both texts, people had to stand up and step onto a scale that should have noted how far they would move from side to side. Interestingly, people who had read the article examining the pros and cons of the measure tended to move from side to side much more markedly than those who had only read the text that only emphasized the positive aspects of the measure. new law.

This very mundane experiment shows us something very interesting: when our mind is split between two opposing options, it sets our body in motion from side to side. Obviously, this is a small wobble and probably not everyone would be able to notice it, but it exists.

But the experiment doesn't end there. The researchers asked these people to take part, either for or against the new law. As you can imagine, once the participants decided which side to take, the movements decreased significantly.


However, the researchers did not stop there, otherwise the experiment would have remained relegated to the field of scientific curiosities. We went a step further, we asked ourselves if this relationship is also found in the opposite direction, that is to say, if the oscillation could hinder the
decision process.

Without thinking twice, they came up with another situation and this time they went further. They created three groups, one of them was asked to remain quiet without moving, while the other two were asked to undertake Tai-Chi movements, only that in some cases the movements involved oscillations from right to left while in others cases from top to bottom.

Finally, the participants were asked to write about a situation in which they would feel undecided, indicating their feelings and ideas. At this point, the researchers found that people who moved before the experiment showed more signs of ambivalence and indecision than those who remained silent without moving.

The most surprising thing is that it was the swinging movement, from one side to the other, which generated more ambivalence and greater indecision. It would therefore be logical to think that if you are trying to make a decision, a little trick to help you is to control your movements and make sure you remain as calm and still as possible.

Initiative: how to achieve what we want with the help of popular wisdom ❯

add a comment of Indecision: Our body shows our insecurity