Incline Bench Press | How are they performed?

The inclined bench presses (45 ° or 30 °) are performed with the dumbbells and represent the best variant of the barbell press always on an inclined bench.

Both of these two types of thrusts are performed in order to place greater focus on the clavicular bundles of the pectoral. We refer more simply to what is commonly called the "high" portion of the pectoral.

Pushing with dumbbells involves a lot of movement control. In fact, on a proprioceptive level, during the stretching with the barbell the ROM, that is the movement, of both limbs is guided by a single element, the barbell itself.

With dumbbells on the other hand, the arms work individually by implicating greater concentration and greater mastery of the gesture. Having said that, it is easy to understand how this exercise (pushes with dumbbells) can only be performed if our performance with the barbell is very high.

If we are not able to perform bench presses with the barbell, we will hardly know how to master the dumbbells in the correct way in order to perform a qualitatively high quality execution. But what are the advantages of doing the pushes with dumbbells? 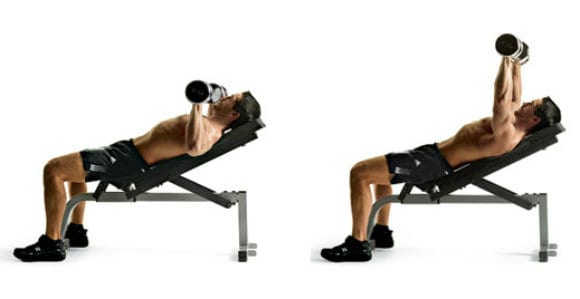 In my opinion, the main advantage is the width of the ROM (range of movement).

When doing presses with the bar, the range of our movement is limited by the bar itself.

In the execution of the motor gesture, when the barbell reaches the chest, the eccentric phase ends, not allowing a high stretch of the pectoral.

On the contrary, instead, the handlebars, working independently, allow a greater range of action.

Having said that this turns out to be the main advantage. Secondly, we can mention the cognitive / proprioceptive factor. As we accent before, the movements of both arms work individually.

This implies a high level of body control and a very high level of concentration, having to perform the same movement with the arms at the same time. In fact, if we are not able to master the execution we make the exercise in vain and we increase the risk of injury.

A useful prerequisite for learning to manage both arm movements can be that of work unilaterally. It consists of working with alternating arms.

Once you have found the position with the dumbbells in your hand, alternate thrusts are performed first with one limb and then with the other. In this way our attention will initially be placed on one limb at a time.

With the passage of time, and the constant repetition of the gesture, we will learn it. Once automated we will be able to perform it correctly even with both arms at the same time. 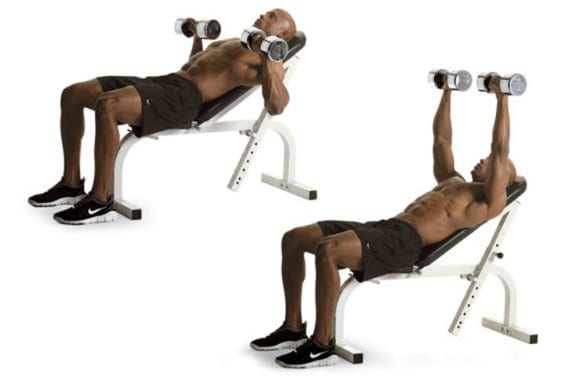 These precautions are essential in order to isolate the gesture as much as possible without risking involving too much muscles that shouldn't work.

Let's not forget that the shoulder joint is very delicate and if it is not safeguarded it is very easy to incur its failure.

The starting position requires that the elbows are never on the same line as the shoulders, but slightly below. This postural detail is also essential.

The gesture is always slow and controlled. Once the maximum eccentric phase has been reached, contract the pectoral and conclude with the concentric phase.

It is very important remember to never fully extend the limbs. In fact, by completing the extension we force the joint to bear a peak load (sudden collapse of a structural member subject to intense compressive stresses), risking to make it yield.

In conclusion we can say that dumbbell presses require greater motor mastery than the barbell and increased muscle involvement.

The choice, however, is always up to you, in relation to what allows you to feel the muscle work better. Your bibs will also be forced to grow. Go back under the bench and push.

add a comment of Incline Bench Press | How are they performed?