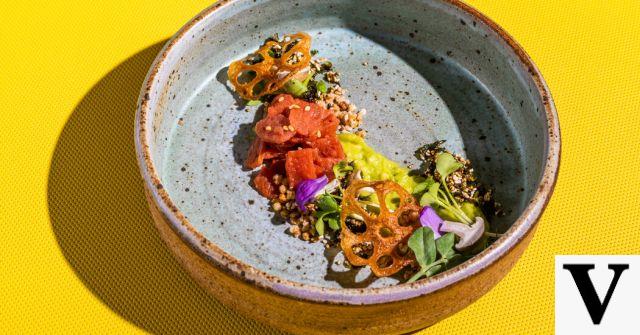 Making a product that has consistency and flavor equal to fish and seafood but without using animals. This is the goal of an American company already very famous for making burger no burgers and other products very similar to traditional meat-based ones, but completely without cruelty.

The food industry is always looking for new protein alternatives to meat, fish and animal derivatives, suitable for those who have chosen not to consume these foods for ethical reasons and aware of the fact that the resources of our planet are now running out (think of how few fish remain in the oceans).

L'Impossibile Foods is a leading Californian company in the sector that has already made "meat without meat" and "chicken" of vegetable origin in the form of hamburgers and meatballs. And, to show success, just think that its products are available on the menus of Burger King and White Castle.

Now Impossible Food has announced that is experimenting with a fish-free seafood product and expects it to be released on the shelves soon. Once again the protagonist of the innovative product is theeme, a protein obtained from the fermentation of a genetically modified yeast and from the injection with genetic material from soy plants.

The goal is to obtain a product that has a similar flavor and texture to seafood and fish. So far, heme proteins are the best suited for the purpose and Impossible Food has already used them to make an anchovy-flavored broth that was part of a paella recipe.


The company's mission is to eliminate meat from diets to save the environment from the devastating impact of intensive farming. Impossible Foods' plan is to have a replacement or alternative protein for each type of meat or fish by 2035.

"The only way to do this is to make fish obtained from plants more delicious than fish found in the ocean," said Pat Brown, CEO of Impossible Foods, pointing out the devastating impact that overfishing has on ecosystems. marine.

Impossible Foods, however, is not the first company to experiment with a seafood product without fish. In fact, Good Catch has already created an alternative tuna species sold in Whole Foods stores, Wild Type has produced a lab-grown salmon alternative instead, and finally Gardein offers fish-free fillets at retailers like Kroger and Target.

The intent of these companies is undoubtedly good and could help the oceans to repopulate fish. It must be said, however, that these foods are still industrial and unhealthy, as to make them you need several steps, genetic modifications and so on are used.


Isn't it better, if anything, to choose to limit or completely eliminate the use of meat and fish by preferring a diet based on other naturally vegetable and cruelty free foods? In other words do we really need these kinds of substitutions to change our eating style?

add a comment of Impossible Food: after meat without meat now comes fish without fish