Perhaps one of the most underrated aspects of body building is the general posture of the subject. Some authors talk about it in some manuals, but then the training sheet is always drawn up with reference to a hypothetical subject with theoretically perfect chest, back, shoulder, arm, leg and abdominal body areas. This aspect, on the other hand, should be the first situation to be analyzed, even before height, weight or body fat. 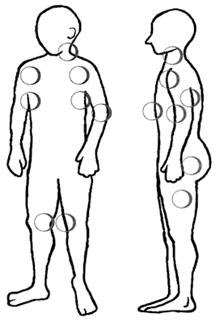 The posture analysis is completely ignored and the body zones are trained with training cards that highlight all the existing techniques, all the combinations of exercises that take into account push and pull, all the set / rep patterns, but none that take into account consider the possibility that the guy who will have to perform it may have an incorrect posture, for example due to a kyphosis.
Posture is the indicator of the skeletal condition in relation to the muscles of the subject, it is not just an aesthetic question of beautiful posture.
Therefore an incorrect posture always indicates a problem with the general attitude of the subject.
A problematic general attitude has repercussions on all the movements that are performed and in particular on those falling within the weak postural area. In this way an exercise designed to work certain muscles, with a wrong attitude does not make them work or partially recruits them and increases the imbalance of the general attitude.
An example? Here it is: Have you ever wondered why some people do better in parallel flexion rather than bench press? Because almost always these subjects, in addition to being thin and light, have a kyphotic posture with curved and anteriorized shoulders. With such a posture, normally also combined with a flat chest, the large pectoral cannot fully stretch and consequently develop the necessary strength; it will work in the middle by coming to yield prematurely and transferring the effort to the triceps which, being the weak link in the kinetic chain in the bench press, will yield even earlier. On the other hand, the same subject will succeed better in flexion at the parallels, since in this exercise the humerus working adjacent to the trunk, however, exploits the strength of the large pectoral, then recruiting above all the small pectoral.
For these subjects the story is quite sad, they try the bench press with poor results, they try the pre-fatigue with as many poor results, they go to the parallels, but in the end the pectorals still grow little and if they do they look like "boobs". more and more posture.
Analyzing the posture first, it would be enough to eliminate all the exercises for the pectorals and the pull-ups with the supine grip, concentrate on an intense card for the back and after a month, these subjects will be able to show off a greatly improved posture and without having trained it. also an improved overall shape of the chest and pectorals. Of course, a month is enough to glimpse the result, but for this to consolidate in a correct posture, it takes at least a year. Incorrect posture does not only affect the pectorals, it also involves the abdominals and legs etc., for example, because it is so fundamental in the training of the bb.
Have you ever wondered why some subjects, while training their abs with so many exercises and hundreds of repetitions, show a protruding abdomen?
Or why other subjects, while religiously performing the squat with a correct execution, complain of a lower back fatigue higher than that of the quadriceps?
And why do other people still fail to develop large biceps while performing barbell curls?
The answer is almost always the same: an incorrect posture, an unbalanced attitude, an unloading of weight not on the target muscles but on the vertebral and skeletal structures.
An incorrect posture nullifies the benefits of exercises designed to involve the skeletal muscles according to a precise trajectory, a trajectory that is altered with incorrect posture. Furthermore, muscle development thought on a posturally balanced subject takes completely different forms on an unbalanced subject, often exacerbating existing defects.
Now let's see in detail how to understand if our posture is correct or not.
The postural analysis, which of course should be verified in orthostastism by an orthopedist, can be followed with sufficient approximation with the "do it yourself" system.
It should be performed in the company of someone who from the outside can first of all be more objective than the subject himself generally is and then can effectively analyze the lateral and rear vision, which cannot be verified alone.
This analysis must be carried out through an objective visual examination, carried out with a "graduated" reference placed behind the subject. For a "graduated" reference, a wall with tiles or a brick wall is sufficient, in this way it will be easy to detect the misalignment of the right body part compared to the left one. A plumb line is also useful to check left / right displacement in case of scoliosis.
Then place yourself, naked and barefoot, in a relaxed frontal position, with your arms at your sides, palms towards your thighs, feet slightly apart but parallel to each other. Do not carry out any action of contraction, retraction, extension or other that modifies your attitude; if you do, you will only be deceiving yourself.
We then analyze the main aspects of posture, carrying out a frontal, a lateral and a posterior analysis.


At this point I would say that always in a summarily exhaustive manner, the main postural problems detected (scoliosis, kyphosis, lordosis, winged shoulder blades, anteriorized shoulders and "bottle shaped") can cause problems in the development of the pectorals, biceps, legs and abdominals .
And this could be the lesser of two evils. Think about what can happen to a person with scoliosis who performs a "heavy" deadlift. His "heavy" will never be an interesting lifting record, muscle development will not be appreciable and will end before the age of forty with a herniated disc !!!
Let's now examine the bib problem, already mentioned.
As we have seen, the modified structure of the vertebral column and collarbones causes the shortening of the pectoralis major which encloses itself and will be unable to extend and contract in a complete range of motion, thus losing up to 50% of its strength. .
If we load on this structure an intense bench press and pull-ups with the supine grip, we will aggravate the incorrect posture with the only result of shortening more and more the large pectoral which will take on a rounded shape together with the small pectoral. In addition, the hypertrophy or rather the shortening of the pectoralis major together with that of the great dorsal will contribute more and more to anteriorise and lower the shoulders.
A correct strategy for this problem can be:

In particular, the pulley pulls or even the rowing must be performed with a much lower weight than that usually used. Muscle attention should be paid to the adduction of the shoulder blades and not to lifting a large load with the arms.
Let's now analyze another typical problem related to posture, that of the biceps in the classic barbell curl exercise. If the shoulders fall forward, they are already weak, if we add some weight they will literally be ripped forward, decreasing the excursion of the barbell in the curl, causing the center of gravity to fall inside the torso instead of outside it. The overall shape of the biceps will appear more voluminous in the upper part at the deltoid. In this situation you will also feel at the end of a series of barbell bicep curls, a fatigue of the trapezius more than that of the biceps, since in practice you are practically doing shrugs. The solution lies in adopting simple precautions that place the biceps in elongation and isolation. For example, perform the dumbbell curl sitting on a bench inclined at 45 ° or perform the barbell curl with your back against the wall. Another typical situation of bad posture is the destabilization of the pelvis. This problem creates negative reflections on all exercises, but in part relevant to the squat.
We never stop talking about the problems related to the execution of the squat and a perfect execution of the squat, which involves lowering the pelvis to the point where the back is not rounded, does not leave you free from injury. In fact, everyone pays attention to the fact that the lower back should not be rounded, but no one mentions that it should not even be arched !!! A subject with a kyphotic attitude and consequent secondary adaptive lordosis or main lordosis, by performing the squat, "naturally" arches the lower back, appearing as a perfect performer of squats.
In reality, excessive arching, in addition to causing dangerous pressures on the vertebral discs, aggravates the dislocation of the pelvis. And what to say if the subject has scoliosis? The arching necessary for the "safe squat" will come at a high price: the spine under load and bound to the ground, will rotate on itself to find its balance and to recreate the physiological curves, thus signing up for retirement programs "safe hernia" and "worn cartilages"!
In this case a strategy for this problem could be to:
- replace the squat with the leg press or even with the leg extension.
- devote yourself to intense abdominal strengthening work with particular attention to the retroversion of the pelvis.
- in the most serious cases, eliminate any exercise where the weight of the barbell weighs on the spine.
Finally, choose exercises that suit your physical capabilities. This will take you further on the road to muscle development than you can get if you want to perform exercises that are considered essential for muscle development but dangerous for you at all costs.
The postural problems represented so far serve to create interest in an aspect that is too often overlooked while the strategies adopted use a body building approach that can be good for those who do not have serious problems and have a good level of general strength.
In no case what is written in this article is intended to replace the visit and therapy recommended by an orthopedic specialist.