If aliens came: what would happen? 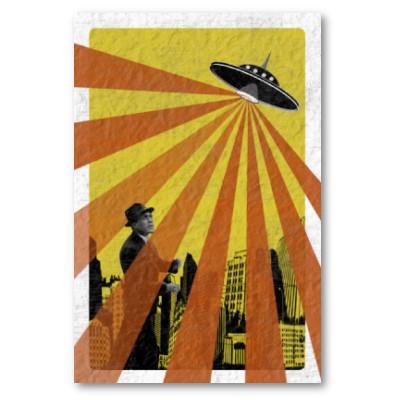 On October 28, 1938, Orson Wells terrorized North Americans with a radio broadcast in which he told them that their country was being invaded by aliens. As we can imagine, the population panicked and truly believed they were being attacked by aliens. It was estimated that of the six million individuals who listened to the broadcast at least 1,7 million believed it to be true, 1,2 million panicked, as many bought train tickets for destinations opposite to where the aliens allegedly landed, while the rest thought it was a joke. For Professor Cantril of Princeton University, this joke represented a tempting opportunity to study the anatomy of panic. Shortly after the event, 135 individuals from New Jersey were interviewed in an attempt to understand what their reactions were and what caused them. Four broad categories were identified: - Those who denied the Martian story because of their internal and personal beliefs. They were convinced that there was no life on other planets other than earth. - Those who verified the falsity of the story by tuning into other radio channels. - Those who tried to verify the story but could not find evidence that contradicted it. - Those who simply panicked without even trying to verify the credibility of the story. Undoubtedly the most surprising category that caught the researchers' attention was that of those who tried to verify the credibility of the story but failed. How is it possible that in an attempt to verify a possible alien attack, reliable information cannot be found? There are two essential factors: 1. Fear. These people were the most fearful of all the groups interviewed; even more than those who suffered from panic attacks. 2. Their rigid beliefs they did not allow him to act logically, let alone really question the validity of the information. If we take a look at the interpretations behind the beliefs, we will immediately understand why it was not possible to counter the news: A very religious woman interpreted the invasion as a divine punishment against a morally corrupt society. Another interesting case was that of a university student who, despite being very intelligent, rejected the idea that radio broadcasts could lie so shamelessly. In short, he submitted to the authority of the words transmitted by the means of communication. In this way he ended up accepting the whole story even if it was logically unbelievable. This joke made in the past leads us to ask whether the same message would currently have a similar effect on the population. Probably, many think that people today are more cynical and less manipulable by the media, and that they are more used to questioning the veracity of any statement. Furthermore, today we can count on many more information channels that would allow us to verify any news in a very short time. So ... could the media try to convince us today of the invasion of earth by the aliens? No. Probably not. Who knows maybe in some circumstances ... If we often let ourselves be convinced by some sensational news from some blogs that don't even bother to show us what source they got the information from, then ... are we really more critical and reflective than previous generations? Perhaps when we are looking for specific information we are trying to prove our beliefs and so we will unconsciously avoid considering all those news that offer us contradictory information. In short, an interesting story that leaves us a lot of material to reflect on.

If you always arrive late you are a creative person ❯

add a comment of If aliens came: what would happen?