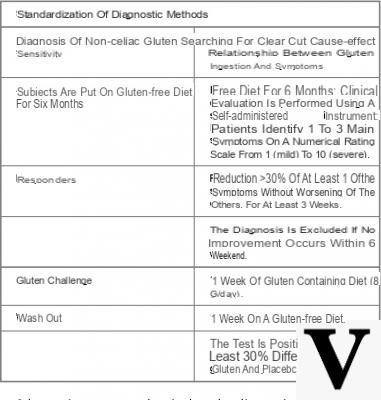 There is a world of people who do not tolerate a special protein, that of gluten. Special because it is present in many cereal-based foods and, above all, pasta and bread which, for us in the village, are certainly not secondary. These are very large numbers, which are expressed with the allergies (one of the country in a thousand), with the celiac disease (one in 100, or about 600 thousand patients) but, above all, with thehypersensitivity to gluten, which affects one in every 20 people, only in our country.

"There are those who react to gluten as if it were a poison (this is the case of celiacs), many with various disorders, which often undermine the quality of life not only from a gastrointestinal point of view, but also from a psychological point of view", he explains Antonio Gasbarrini, full professor of internal medicine at the Catholic University of the Sacred Heart and director of the Department of Medical and Surgical Sciences, of the UOC of Internal Medicine and Gastroenterology and of the Cemad (Digestive System Disease Center) of the Gemelli IRCCS University Hospital Foundation in Rome .

"L'hypersensitivity to gluten, in particular, it represents a conspicuous slice of the large family of the irritable bowel, which involves ten million of villagers ». But if the celiac disease leaves no way out, and imposes the unconditional renunciation of the beloved spaghetti and everything that contains even the shadow of gluten, for those who are hypersensitive often the diet can not be upset together with the habits of life, also because, as you will read, theanxiety also plays a vital role in these cases.

1. Professor Gasbarrini, who are the hypersensitive to gluten?

These are people who realize that when they remove all wheat-based foods, that is, foods that contain gluten, they are much better off. It is called hypersensitivity precisely because it has been seen that if they eliminate this protein from the diet, the ailments are reduced or even go away.

2. What are the classic symptoms?

Hypersensitivity causes digestive or extra digestive disorders and very often induces symptoms of irritable bowel. Basically, after you eat gluten-containing foods you feel abdominal pain and discomfort, bloating and an increased need to go to the bathroom.

3. And what are the symptoms that have nothing to do with the gastrointestinal system?

We call them symptoms extradigestivi. They confuse the diagnosis phase not a little, especially if it is to be done by those who are not specialists in gastroenterology. For example, joint problems arise, reminiscent of those typical of fibromyalgia. It is a widespread malaise, aggravated by muscle aches and a feeling of heavy extremities. And then the patients also describe one state of confusion: as soon as they eat they feel foggy. This symptomatology obviously changes from person to person: there are those who have more pain in the joints and those who feel more confused.

4. You eat and feel confused: but is it a psychological or physical symptom?

No, it's really physical. The main psychological symptom connected tohypersensitivity to gluten, instead it is theanxiety. Many patients of this type are anxious. Because anxiety evokes intestinal inflammation. In fact, there is a high brain and a low brain: theintestine is a full-fledged brain, with its own nervous system with its own neurons, and it is influenced by the state of anxiety. When a person is anxious or depressed, the high brain sends signals to the gut, which is our emotional brain. If I am worried and anxious, the intestine becomes inflamed: who hasn't tried it, for example by taking an exam or an important test? I have a huge consideration of anxiety, a positive consideration. For me, the anxious person is a hypersensitive person, where sensitivity must be considered a virtue. The problem is that it must be channeled, and there are problems, even physical ones, if the anxious person cannot find his own dimension. Anxiety it is not genetically transmitted, but it is a form of protection that develops in the first 10 years of life. It is a magnificent defense mechanism from the events of life and, also for this, whenever I develop anxiety I evoke the activation of intestinal immunity.

5. Are there any other physical symptoms to evaluate?

Hypersensitivity to gluten often has some similar to those of celiac disease, even if more nuanced. In the classic form, celiac disease causes diarrhea, weight loss, meteorism, and extra digestive disorders such as osteoporosis, headache, anemia, infertility and even spontaneous abortions. It is indeed one malabsorption disease, and therefore can have digestive and extra digestive disorders. But be careful because in some cases there may be a single symptom, which can make diagnosis very difficult. Not infrequently, in fact, as a single sign of celiac disease there are osteoporosis, iron deficiency anemia, alopecia or migraine. Some patients also suddenly become lactose intolerant, and that is the only sign that appears. It is an onset symptom because lactases, the surface enzymes that metabolize lactose, a non-absorbable disaccharide, are lost into two simple sugars which are then absorbable. Therefore watch out for food intolerances because they can be the first sign of celiac disease. This disease can be represented as an iceberg: the tip is represented by the classic digestive disorders, but under the iceberg you have a huge mass of ice which are all other manifestations. For every classic celiac there are 9 celiacs who have very different signs. There great difficulty, therefore, is not diagnosing classic celiac disease, but atypical one.

6. Why is it so important to distinguish celiac disease from gluten hypersensitivity?

Knowing that it is not celiac disease is essential. You cannot talk about gluten hypersensitivity if you do not know perfectly well celiac disease and exclude it in the diagnosis. Celiac disease comes only to predisposed people, that is carriers of certain genes which are present in one in four / five of the country, therefore about 10-15 million people who are at potential risk of becoming celiac. But only some of them will develop the disease: genetics alone are not enough, and other factors are needed to cause the disease to explode. Then the immune system attacks the gluten and what gets in the way is the intestinal barrier, which is its gateway to our body. This can happen at any age: we are born with the predisposition, then an important stressful event must arrive for which the intestinal barrier is damaged, so that when the gluten enters it it is suddenly attacked as an enemy.

7. How is the differential diagnosis done?

As mentioned, excluding celiac disease in the first place. The classic one is diagnosed with the presence of certain antibodies (antitransglutaminase, deamidated antigliadin). In children, the serological part is enough, in adults intestinal biopsies are also needed. Multiple biopsies of the duodenum are performed with gastroscopy. Only once celiac disease has been excluded, can we hypothesize the presence of hypersensitivity to gluten, a subtle and difficult clinical condition to ascertain: in fact, to date, we do not have histological or identifiable biomarkers in the blood.

8. So there are no specific tests for hypersensitivity?

In theory, one could take, under hospital control, tablets containing gluten or placebo and then check the reactions safely (the placebo is as important as the anxiety factor is important in this field). In reality though these tests are very complex and are used only in clinical trials. An alternative most feasible in clinical practice is that of carry out a test that includes a protracted period of a gluten-free diet to see if the patient is better.

9. But can hypersensitive people eat pasta?

In celiacs, gluten is a poison; if you are hypersensitive you can also just reduce it, and not eliminate it. If you eat it every now and then, nothing happens. The anxious person does not need to eat gluten to activate intestinal immunity. Anxiety means danger, danger means I defend myself, I defend myself by increasing intestinal permeability and activating the immune mechanisms of the intestine. Therefore, in some patients, by correcting the state of anxiety gluten does not bother, or it does much less. Then the gastroenterologist decides on the basis of the patient's knowledge, and may not remove the pasta or bread entirely. Because hypersensitivity is not a black-and-white disease like celiac disease, but it is a range of grays linked to the amount of gluten you take. And also to the type of pasta: this is demonstrated by our scientific study, unique and first of its kind (see below).

10. No to cuts of starchy foods automatically and for everyone therefore ...

Not even because giving up starchy foods is a food and lifestyle revolution that not only impacts on eating habits, it is also psychological and economic. Economic because it is necessary to include in the daily diet a whole series of products that on average cost more than those usually brought to the table. L'hypersensitivity to gluten is in fact not recognized by the NHS, and therefore the products are not refunded. For celiac disease, on the other hand, which is a recognized chronic autoimmune disease, there are exemption codes, and reimbursement of a certain amount of products is foreseen. But hypersensitivity also comes at a huge cost in terms of health, health and economy: let's just think of the many days of work lost due to his symptoms.

The research: you can eat pasta

THEDoes hypersensitivity to gluten apply to all types of pasta and bread or only to certain types of flours? This is the question posed by an innovative scientific study conducted by a team of the Policlinico Gemelli Foundation in Rome and published in the authoritative journal Nutrients. "We compared a grain of the native and particular country with other commercial pasta of EU or non-EU origin," says Gasbarrini. "The volunteers had long since eliminated gluten from the diet, which was reintroduced for 14 days." Result: those who consumed the first type of flour, the Senatore Cappelli variety durum wheat pasta, had fewer complaints than the other types of pasta in comparison. The study is the first to show that not all pastas are the same for gluten-sensitive people. "Therefore, only in those hypersensitive to gluten, it is possible to reintroduce pasta, in small quantities and with due attention," concludes Gasbarrini.

Audio Video Hypersensitivity to gluten: 10 questions to Antonio Gasbarrini
What are superfoods? ❯

add a comment of Hypersensitivity to gluten: 10 questions to Antonio Gasbarrini