How to tell if a guy likes you: 54 signs of interest 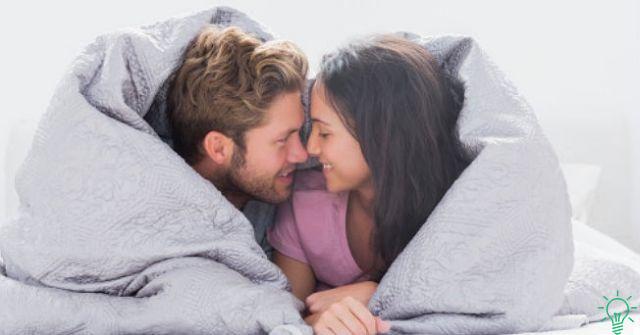 How to tell if a guy or a man likes you? This is a question that every woman has asked herself at least once in her life ...

Through this article I will try to provide an answer as accurate and thorough as possible, also addressing very particular cases, such as:

There is a large number of signs, more or less explicit, which boys continually send to girls they are interested in. Learning to decipher them is a vital step you need to take to get hold of your love life and avoid missing out on a lot of important bargains.

But there's a problem ... The signs that help you tell if a guy likes you may vary based on the context in which you find yourself, your age and the character type of the boy in question.

For example, you can easily imagine that the signals that a shy 16-year-old boy would send to his classmate he has a feeling for are totally different from those that a 40-year-old man would send to a colleague of his who interests him. Do you agree?

So let's do this: first I'll introduce you to gods general tips, which are the basis for understanding if he likes you. Later we will go into more particular cases and we will see all the typical signals for each situation, that boys send to a girl in whom they have an interest.

How to tell if a guy likes you

So let's see how to understand if he likes you. First you will need to study the male body language a little.

The body of a guy interested in you has a language of its own. This can vary based on his character (whether he's shy or outgoing and confident), but they do exist some common points very important in the non-verbal communication of the guy who likes you ...

2. The way he communicates with you

The ways in which he communicates with you, both live and in chat, are a fundamental element to understand if he likes you. In particular, pay attention to the following signs of interest:

3. Find out if she is flirting

There are several ways a guy might flirt with you, but before we see them, let's find out some general principles, which you should never forget:

That said, let's see some more or less subtle signs that show you that is flirting with you:

A guy who likes you will tend to be especially nice to you. Let's see some examples of kindnesses that will make you understand that he likes you:

5. He treats you differently than others

Finally, the main rule to understand if a guy likes you is to observe how he behaves with other girls, and compare this behavior to how he interacts with you.

The fact that a guy often comes up to you, talks to you, jokes, touches you and comments your updates on various social networks means nothing if he does the same with all the other girls.

Instead you understand that a guy really cares about you when he has particular precautions towards you. It doesn't have to be huge - if you're dealing with a shy guy, even a simple look can mean a lot!

Now that you know the main signs of male interest, let's see some tests you can take to figure out if a guy likes you.

The first is what I have already proposed to you at the beginning of the article. If you haven't completed it yet, I invite you to do it now and find out the result:

The second test, on the other hand, requires more courage, because it is something you will have to do in his presence, but it will also provide you with a clearer and more precise answer. Let's see what it is ...

To figure out if he likes you or not, you have to push yourself a little further than what you usually do with him. You don't have to ask him clearly if he's interested in you, but I recommend you take some small risks longer.

Talk to him longer than usual, ask him a slightly deeper question, give him a compliment, seek physical contact first, give him a smile while you look at him, text him first in chat twice in the same day ...

In short, do something more than what you normally do with him. Give it some twine. Take a step towards him and see how he reacts.

Very often guys, especially if they don't have much experience with the opposite sex, or if they go to school, college or work every day with the girl they have a crush on, they never find the courage to take the first step or to give too clear signals of interest.

While it is true that it would be up to him to make the first move, you must also understand that you cannot expect to leave all the burden of making something happen between you two on his shoulders.

Run a few tests by teasing him a little more than usual, and see how he reacts. If she responds positively by flirting with you, that's it. If he never responds to your tests, there are two cases: either he is too shy, or he is not interested.

How to tell if he likes you: special cases

Keeping in mind everything that has been said so far, let's now come to a bit more particular cases, starting with that of the classic shy guy.

How to tell if a shy guy likes you

Shy guys are really hard to understand, right? Sometimes it seems to you that they are interested, but they never make a move towards you, and quite the contrary they often drift away when you try to give them signals. Let's try to understand them a little better ...

A shy guy has a comfort zone extremely limited. This means that he is comfortable talking to his close friends and family, when he is at his home and when he carries out his little daily actions.

As soon as he is faced with a slightly new situation, or talking to a person he doesn't know well, he starts feel uncomfortable and tends to move away. Let alone what happens if he finds himself dealing with the girl he likes!

The shy guy would like with all his being to drop his clothes of insecurity, go to meet the girl of his dreams and declare himself once and for all, or at least start interacting and joking with her normally.

But he never will ... there is too much force within him holding him back. This is the fear of getting involved, of making a fool of himself, of having to deal with that sense of embarrassment and inadequacy that pervades him every time he tries to do something new in his life.

In a future article I will also talk to you about how to conquer a shy guy, but for now I will just explain to you how to understand if a shy guy likes you. Here are the main signs:

How to tell if an outgoing guy likes you

A completely different story is that of the extroverted boy.

He has more pronounced social skills, a generally wider comfort zone, and for sure finds no difficulty interacting with you, nor with anyone else.

You tend to have less trouble deciphering an extroverted guy's signs of interest, also because he'll often show you that he likes you quite explicitly. However, here are some key clues:

How to tell if a guy you don't know likes you

Maybe there is a guy you sometimes see, at school, college or work, but you don't know yet. You like it very much and would like to know if this interest of yours is reciprocated.

Instead, perhaps you simply want to learn to recognize the signs of interest of the new guys you come into contact with every day, or who find themselves occupying the space around yours by chance. So here it is how to tell if a guy you don't know likes you:

How to tell if a friend likes you

Knowing if a friend likes you can be pretty tricky. You two already have a well-established relationship of some kind, and neither of you will want to risk getting out of balance and ruining it.

You are in the so-called "friend zone", with all the disadvantages and advantages associated with it. But if you want more from him than just friendship, you may be wondering how to tell if he likes you.

Well, you have to keep in mind all the considerations we made at the beginning of the article, on how to understand if a guy likes you. In addition to this we can add the following signals:

How to tell if he really likes you

Now let's talk about another case: one where you've been dating or chatting with someone for some time. You already know that he is at least minimally interested in you, but you want to understand if he really likes you and if he is falling in love with you. Here are the signs that bode well:

How to tell if a girl likes you: 20 signs of female interest ❯

add a comment of How to tell if a guy likes you: 54 signs of interest